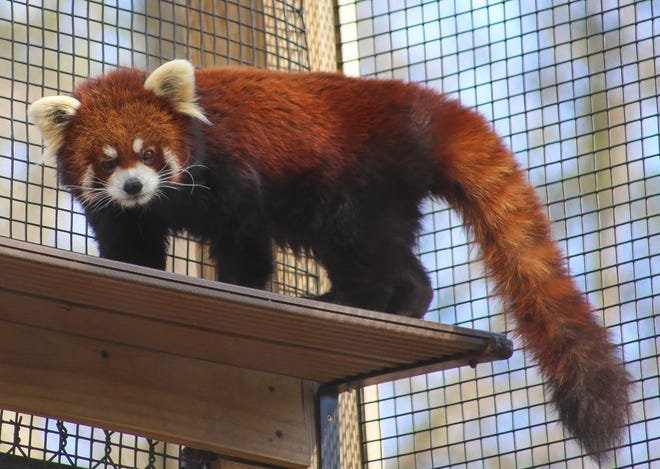 Today’s batch of burning questions, my smart-aleck answers and the real deal:

Question: I visited the WNC Nature Center recently, specifically to see the much-lauded red pandas, Leafa and Phoenix. This was my first time to see them. Phoenix was stirring around their enclosure, but a sign posted there said that Leafa was temporarily off exhibit for surgery. Can you check on her for us? I’m sure lots of folks would like to know. And by the way, Phoenix is a magnificent boy.

My answer: She was probably getting some plastic surgery because everybody always raves about what a “magnificent boy” Phoenix is.

Real answer: Rest easy, Dear Reader: Leafa is alive and well. And, she’ll have you know, she’s a magnificent girl.

She just had a little glandular problem. The red pandas have an area on the base of their tails that’s used for scent marking.

“She had kind of an abscess there, if you will,” said Chris Gentile, executive director of the Nature Center. “It’s something over the past few years we’ve had to drain.”

This issue usually arises during breeding season, which the red pandas are in right now.

“So, when we did her annual physical, we found a mass this time,” he said, adding they were concerned it might be a bigger problem.

They put her under anesthesia and removed the scent gland, a bit of a risky procedure. The good news, Gentile said, is that a lot of zoos work with red pandas, including the one in Knoxville, Tennessee. So the Nature Center was able to take advantage of some consultation.

“It came out well,” Gentile said. “We sent the tissue sample in just to see if it was cancerous, and it came back negative, so that’s good news. She is already back on exhibit, like nothing happened, pretty much.”

The procedure took place Feb. 5, and Leafa was “up and about that night.” Staff covered the exhibition area so she wouldn’t be stressed by viewers, but by Feb. 11 Leafa was on full public view again.

“It’s wonderful that people are so connected to our animals that when one of them is going through some care, they’re interested enough to know how it turns out,” Gentile said.

We wrote about the red pandas in 2019, shortly after their arrival, in WNC Parent magazine. Here’s an interesting nugget:

“The introduction of red pandas to the Nature Center may come as a surprise, but a direct relative of the red panda, Bristol’s Panda, was found to live in the Appalachian mountains nearly 5 million years ago.”

The magazine also reported, “Red panda numbers are dwindling in the wild, with less than 10,000 individuals left.”

More:Answer Man: Will we get a cicada deluge here in 2021?

“The Association of Zoos and Aquariums’ Species Survival Plan may be the key to bringing this species back from the brink of extinction, much like the red wolves of our home state,” WNC Parent reported. “Red pandas are from an area that has a very similar climate to our own, which will ensure their happiness and success at the Nature Center. In fact, the Knoxville Zoo of Tennessee has fostered more red panda births than any other zoo in the program…”

According to National Geographic, red pandas are herbivores typically about 20-26 inches in length, with a 12-20 inch tail. They can weigh 12-20 pounds.

“The red panda shares the giant panda’s rainy, high-altitude forest habitat, but has a wider range,” National Geographic reports. “Red pandas live in the mountains of Nepal and northern Myanmar (Burma), as well as in central China.

These animals spend most of their lives in trees and even sleep aloft. When foraging, they are most active at night as well as in the gloaming hours of dusk and dawn.”

Leafa and Phoenix, who have bred together, are 11 and 10 years old, respectively.

“In the wild, they typically don’t live past 10 years,” Gentile said. “In zoos, we’ve seen red pandas live up to their high teens. I think the oldest one was over 20.”

The WNC Nature Center is home to 60 species of wildlife that live or have lived in the Appalachian region, including bears, deer, cougars, bobcats and more. It’s open seven days a week, with admissions from 10 a.m.-3:30 p.m. For more information, visit https://wildwnc.org/

On another note, Gentile said they recently added two new red foxes to their exhibit. Each is missing a leg — one probably from a trap, the other possibly from an encounter with a dog.

These foxes would never have survived in the wild, so the Nature Center is happy to provide them a home, Gentile said.

This is the opinion of John Boyle. To submit a question, contact him at 232-5847 or jboyle@citizen-times.com