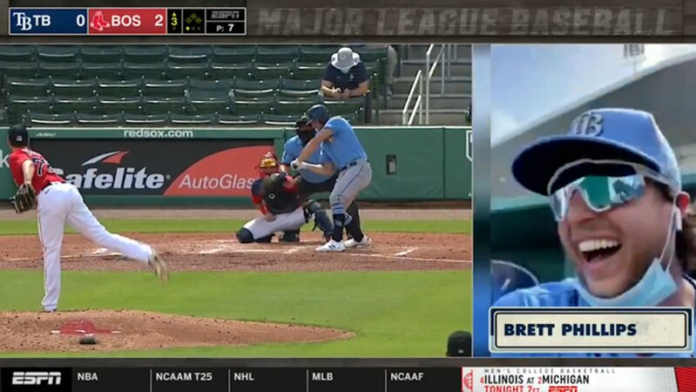 He was miked up for an inning of ESPN’s national telecast of the Rays’ exhibition game Tuesday against the Red Sox. And good thing, since the game was a hardly entertaining 9-3 loss for the Rays (1-2).

“It’s an honor that they thought that I was interesting enough to be miked up,” the Seminole native said. “I hope I had some good things to say. I haven’t looked at my phone (for text messages). So I hope I didn’t say anything too, too crazy.”

Phillips, as you’d expect, told some funny stories, such as how he is now recognized around his hometown since his star turn in Game 4 of the World Series.

Due to COVID-19 protocols, ESPN didn’t have Phillips wear a microphone. He used wireless AirPods linked to his cell phone, which was in his back pocket while he played centerfield.

This team takes itself too seriously.

What if he’d had to make a diving catch?

“That would have been funny explaining to my Sprint insurance claim people: ‘Hey, I was in a Major League Baseball game, and I had my phone in my back pocket and it broke. What’s in the written rules on that one if I can get a new phone?’”

Teammate Randy Arozarena wanted in on the fun and took one of Phillips’ AirPods to listen in. It also looked briefly like they might stage another dance-off, as they have previously.

After Phillips came off the field, ESPN producers had him use the phone to do a FaceTime interview from the dugout, then talk to manager Kevin Cash, joking about Cash and Taylor Walls both attending Florida State.

“I was hesitant,” Phillips said. “Obviously, Cash has got better things to do than talk to Brett Phillips during the game.”

David Hess, a veteran of three seasons with the Orioles in camp on a minor-league deal, had a rough Rays debut, allowing four homers while facing 11 batters over two innings, getting four outs. Cash said the Rays had asked Hess to trust his stuff and throw more strikes. He appreciated him sticking with the plan despite the rough results. “David has been around,” Cash said. “He’ll be fine.”

Michael Wacha, the eight-year veteran signed as a free agent, was pleased with his one-inning first outing, allowing a leadoff walk then setting down the next three Sox, including a strikeout of J.D. Martinez on a trademark changeup. “It felt good getting back out there in a little competition,” Wacha said. “I was happy with pretty much how everything was working out there.”

Minor-league lefty Kenny Rosenberg replaced Hess in the third, and when he walked three of five batters the inning — with only two outs — was called off, as is allowed when a pitcher exceeds 20 pitches. … Infielder Kevin Padlo hit a massive homer to center …. Consensus top prospect Wander Franco, who turned 20 Monday, was the DH and went 0-for-3. He is expected to start at shortstop Wednesday. … Walls made a snazzy leaping catch at second.

• Cash said Joey Wendle was doing okay after being hit by a pitch on the helmet Monday, and is slated to return to action Wednesday. Ji-Man Choi is scheduled to DH in his spring debut, and Yoshi Tsutsugo will see his initial action at first. The game is scheduled for seven innings but could be shortened to six.

• Cash wouldn’t be baited into responding to the joking jabs by Twins manager, and good friend, Rocco Baldelli, after asking him to shorten Monday’s game as the Rays were low on pitching: “I’m really fond of Rocco,” Cash said.

• Lefty reliever Cody Reed said the finger issue that cut short his 2020 season is resolved. He had some weakness/numbness in his hand and fingers after being acquired from the Reds, which made gripping the ball an issue. He said it could be a mild form of thoracic outlet syndrome, but Botox injections helped. “I feel fine now,” he said.