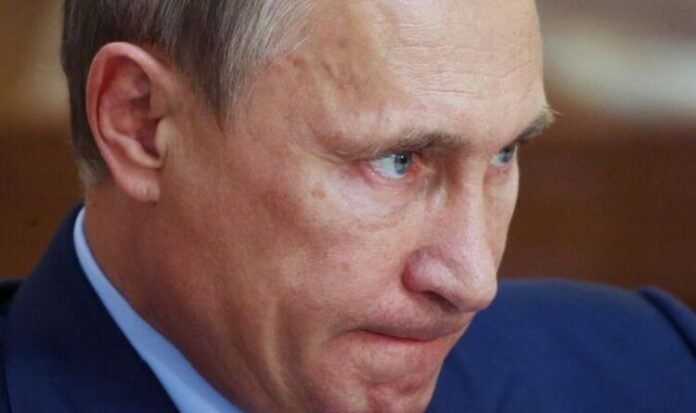 Eight years ago Russia violated international law by taking Ukraine’s Crimean peninsula by force. The Kremlin then attempted to give its actions a veneer of legitimacy by holding a sham referendum, conducted in a heavily militarised environment. The anniversary comes on the fourth day of Russia’s invasion of Ukraine.

In a statement on his official Telegram account Ukraine’s official adviser Anton Gerashchenko said: “A group of special forces of the Russian Federation has just burst into the city through Alekseevka. On the street.”

Russian troops also set ablaze a gas pipeline outside Kharkiv, while an oil depot in Vasylkiv near Kyiv was destroyed by a Russian air strike.

The Russian advance in Kharkiv is reportedly being met with fierce resistance.

However, eight years ago Putin insisted that Russia’s takeover of the Crimean peninsula would not descend into war.

During a live address on Russian state television, the President stressed that the armed forces of Ukraine and Russia were “brothers in arms”.

The President added that there was no scenario where Russian troops would fire “on women and children.”

“Unity is happening now in the Ukraine, where not a single shot has been fired, except in occasional scuffles.”

The Russian leader was speaking shortly after gunfire rang out in the Belbek air base in Crimea, where there was a standoff between pro-Russian and Ukrainian soldiers.

He instead described them as pro-Russian local self-defence forces, adding: “There are many military uniforms.

“Go in any local shop and you can find one.”

Last night the Western allies waged economic warfare on Russia by agreeing to block the country from the Swift international banking payment system.

The UK, US, Canada and key European countries agreed to remove “selected Russian banks” from the Swift payment system.

In a White House statement, the Western allies said they condemned: “Putin’s war of choice and attacks on the sovereign nation and people of Ukraine.

It continued: “We will hold Russia to account and collectively ensure that this war is a strategic failure for Putin.”

There has been mounting pressure for greater sanctions to be imposed on Russia as Putin continues his ruthless invasion of Ukraine.