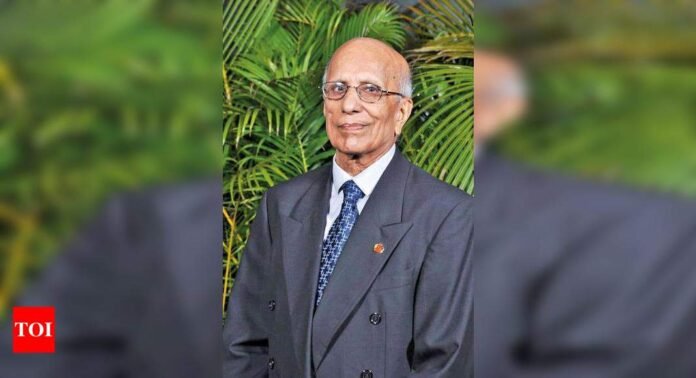 Vadodara: Dr Surendra Nath Sharma, who established the department of plastic surgery at Baroda Medical College (BMC) in 1967, has passed away in Vadodara. Dr Sharma was a pioneer in the discipline in the state. “He is credited with the creation of the first super-specialization degree of MCh in Gujarat,” said Dr Sharma’s son, Dr Sandeep Sharma, a plastic surgeon himself. “The degree was recognized by the Medical Council of India in 1985.”
Dr Sharma studied surgery at King George’s Medical College, Lucknow, and then specialized in plastic surgery from Government Medical College, Nagpur, and PGIMER, Chandigarh. He breathed his last on February 17; he was 86.
“Instead of establishing a lucrative career in private practice in a metro city, my father chose to come to Vadodara to join a government medical college to set up the department of plastic surgery,” said Dr Sandeep Sharma. “He took up the challenge of starting a teaching programme in plastic surgery to train and prepare students in this speciality of the future.”
Dr Sharma was also the founder-president of the National Association of Burns. He started a campaign to protect women in relation to burn injuries. The initiative taken up between 1970 and 1975 highlighted unsafe cooking practices.
“He went on to become the president of the Association of Plastic Surgeons of India in 1989,” said Dr Sandeep Sharma. “His work earned him recognition at national and international levels.”
Dr Sharma is widely recognized for his work in burns surgery, reconstruction in patients with leprosy, treatment of facial injuries, and hand surgery. He set the standards for best practices in antisepsis and asepsis protocols, practised even today.
Dr Sandeep Sharma said apart from his surgical and academic achievements, Dr Sharma was also an avid runner. “He participated in the Mumbai Marathon and Delhi Half Marathon till the age of 79 since their inception,” he said. “He also won the Vadodara green marathon in his category.”