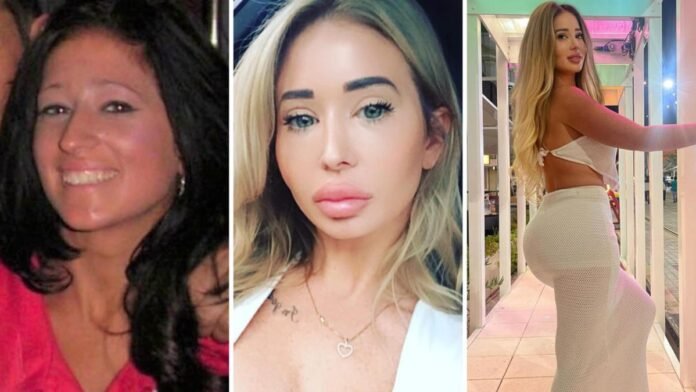 Ashleigh Candela looks worlds apart from her younger years after she splashed out more than $100,000 transforming her look.

The retailer worker became fixated with cosmetic surgery after going under the knife for the first time at age 19 where she opted for breast implants to enhance her natural B bust to a size E cup.

“It just escalated from there,” Ashleigh, now 37, tells 7Life.

The now-37-year-old, from Sydney, has lost count of how many procedures she’s actually had.

“I just love the look of plastic surgery. To be honest, I wasn’t unhappy with myself but I knew I wanted to fix things and once I got started I couldn’t stop,” she explains.

“I look at myself in the mirror and I’m super happy with the way I look. I don’t have any regrets of what I’ve done.”

Ashleigh says she always knew she wanted to undergo a rhinoplasty to fix the broken nose she suffered growing up.

Eventually, she opted for liposuction three times and a Brazilian butt lift – a procedure in which she had excess fat transferred from her back and thighs to her bottom to make them appear “fuller”.

“I’m healthy from the inside out and that’s what matters to me,” she says.

“My transformation has opened up a bit more doors to opportunities in my life but I also have a good personality to match it.”

Ashleigh says strangers often assume she “must have hated” herself during her life before plastic surgery – but this isn’t the case.

“I never thought of myself as ugly,” she says.

“I just wanted to make improvements and changes to my body and face. They were tiny improvements over the years that have all impacted my life in such a positive way.

“It has nothing to do with how I feel about myself at all. I think that’s just a misconception people have about those who get plastic surgery.

“They assume these people have body dysmorphia – and it makes them a bit deluded to what they actually look like – but I don’t have that at all.”

Despite spending up to $1,000 on treatments every month to maintain her look, Ashleigh has been reversing her facial fillers.

“As I got older, I started thinking about dissolving the fillers in my face just to have a more natural look,” she says.

“I’m currently dissolving the fillers in my face, around under my eye areas because they were so overfilled over the years.

“Next week, I’m getting my lips dissolved… I don’t want overfilled lips anymore. The trend sort of died down for me.

“But I still love the big oversize breasts and my big bum – I wouldn’t change that for the world.”

However, looking at her history of procedures, she admits: “If I had to do things now, I would have done things a little bit differently.”

Reflecting back at old pictures of herself, Ashleigh says: ”It seems like a life time ago and so much has changed.”

Since unveiling her look on social media, Ashleigh says she receives cruel remarks from trolls from time to time.

“The negative comments don’t really faze me at the end of the day. It’s a reflection of them, it’s not a reflection on me,” she says.

“I don’t really care if you hate me honestly. My life is my life. I have my friends who love me no matter what I do.”

She adds: “I think everyone has a right to live how they want to live. I’m not here judging anyone, I’m not hurting anyone.”