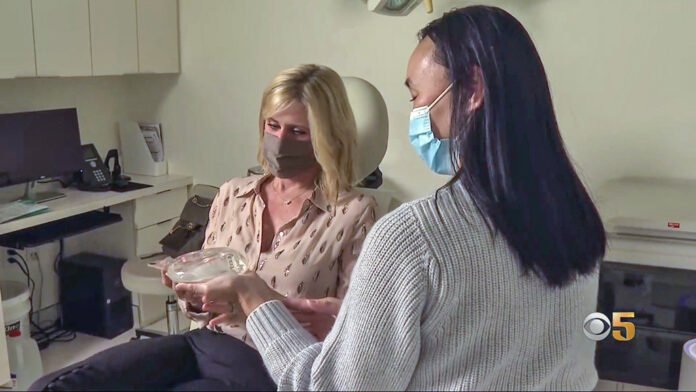 SAN FRANCISCO (KPIX) — For a growing number of women, when it comes to breast enhancements with implants, there’s been a cultural shift toward a “less is more” attitude. Even during this pandemic, Bay Area doctors are seeing a big difference in what women want and are hearing surprising reasons why they want it now.

“The actual demand for plastic surgery actually increased to levels that I would have never believed during a pandemic,” said Dr. Carolyn Chang, one of the Bay Area’s premier plastic surgeons.

For the past few years, she’s seen rising demand for a certain kind of procedure called “explant” surgery.

“I’ve noticed an increased desire for women to have their implants removed,” Dr. Chang said. “I’ve had a much larger number of people asking for explants than ever before.”

The FDA recommends replacing implants every 10-15 years. Now, more women are replacing them with a smaller size or with nothing at all.

KPIX spoke to women who have had explants for various reasons.

“Becky” got implants following a divorce. She got a notice that her specific implants, made by Allergan, were under a voluntary recall. Instead of swapping them for a different type, she decided simply to have them removed and not replaced.

“I’m at a point where I’m like I don’t want to be over-sexualized, you know? I’m a mom,” she explained.

There was an additional benefit. Becky no longer was top-heavy and her back pain vanished.

“I just feel so much lighter,” she said with a laugh.

A woman we’ll call Sonia told us a different story. She spoke to KPIX before she went into surgery at Sutter Health CPMC Davies campus in San Francisco.

Five months after Sonia got implants she began to experience back and leg pain as well as headaches.

Specialists could find no explanation for her problems.

“Up the stairs takes me 10 minutes and I’m only 45. I shouldn’t be living like that,” Sonia said.

Sonia wondered if her implants played a role. While there’s no guarantee she’ll feel better, she asked Dr. Chang to remove them.

Michelle had an explant procedure and replaced them with what she prefers: smaller implants. She told KPIX she felt the pandemic was the right time to swap them out: there’s a lot of downtime for recovery at home.

“It actually worked out perfect. We didn’t have any plans and I knew that I would have time to recover,” Michelle explained.

She prefers to go small and look natural.

She told KPIX how, in the past, she was pressured to go big.

“Sometimes a man will look at it and say, ‘Oh you’re tall you could go bigger’ and I really kind of had to almost fight to make sure I got what I wanted the first time,” Michelle said.

“People are more confident and they have been looking at this time as a time for self-improvement,” added Dr. Chang.

Dr. Chang said that, when performed safely and according to strict guidelines, there is no extra risk of contracting COVID-19 from explant surgery.

“As far as personal exposure and exposure to patients, I think it’s a very controlled environment,” Chang said.

Another reason why the pandemic may be fueling a boom: for those who are employed, there is more disposable income as extravagant vacation travel has fallen off.