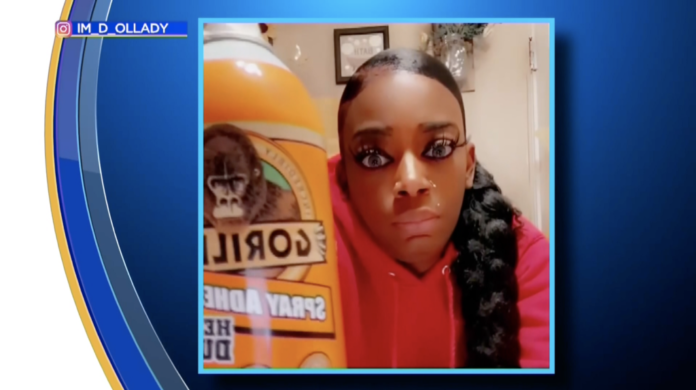 BEVERLY HILLS, CA (KCAL/KCBS) — A Beverly Hills plastic surgeon has offered to help Tessica Brown, the Louisiana woman who went viral after using Gorilla Glue on her hair, by performing a special procedure.

“Tomorrow the procedure will be to dissolve the polyurethane, which is Gorilla Glue is made out of,” Dr. Michael Obeng, director of MiKO Plastic Surgery, said.

Brown’s ordeal started about a month ago after she ran out of hairspray and decided to use Gorilla Glue to hold her hair in place.

“I used this, Gorilla Glue spray,” she said in a video originally posted to TikTok.

But Brown was not prepared for the difficulty to come. She said she tried baby oil, cooking oil and shampoo to try to get the hardened glue off her hair, but nothing worked. She even went to a local emergency room, but the acetone wipes they gave her to breakdown the glue burned her scalp.

“When I found out this was a reality, you can only feel compassion and sympathy for Tessica,” Obeng said.

Obeng said he reached out to Brown and said he could remove the glue, and save her hair, with a special chemical treatment. He even said he would do the treatment, which costs more than $12,000, for free.

And while Obeng said he has never dealt with something like this before, he was confident that it would work after his office did a simulation Tuesday using the same Gorilla Glue spray Brown originally used to attach hair to a skeleton skull.

“We waited for about three hours, and we used it, and it was very successful,” he said.

Obeng said she does not anticipate any hair loss for Brown, but said there might be some damage.

“We are going to look for signs for chemical burns, and we have the solutions to stop burning if we identify them,” Obeng said. “This is gonna be done under general anesthesia so that she doesn’t have any pain at all.”

Brown is expected to have the procedure Wednesday and thanked her followers for their continued support.

Meanwhile, Gorilla Glue said its product should never be used on hair.