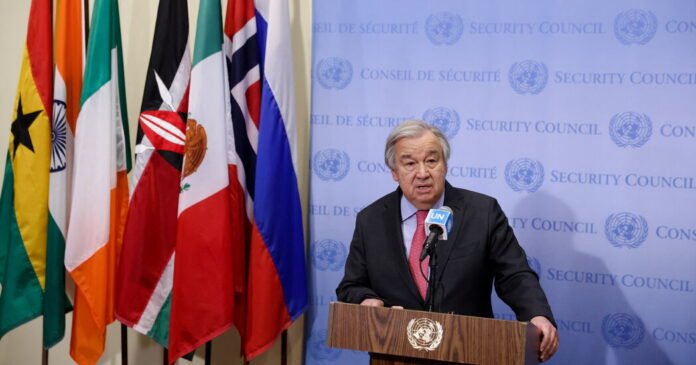 Re “Warning of a ‘Catastrophe’ With the Use of Fossil Fuels” (news article, March 22):

Since the climate crisis is a global problem, the U.N. secretary general, António Guterres, is uniquely positioned to understand the big picture. From his perspective “we are sleepwalking to climate catastrophe.”

Despite dire warnings from scientists, we continue our addiction to these life-destroying fuels. Nations are reneging on promises to reduce emissions. Russia’s war on Ukraine exposes the grave geopolitical consequences of dependence on fossil fuels that are largely controlled by authoritarian governments.

Fossil fuel interests and their political allies are pushing for “all of the above” energy strategies rather than using this crisis to double down on a rapid transition to clean energy.

Mr. Guterres’s call to phase out coal, end fossil fuel subsidies and halt further exploration are good first steps, but economists agree that the best way to speed the transition is to make the polluting industry pay an increasing fee on their carbon pollution.

The obvious way to achieve energy independence is through renewable energy, since no nation owns the sun or the wind. The technology is available; only political will is needed.

The decades-old climate story has evolved. It was called “global warming” at first, followed by “climate change.” More recently, “the climate crisis” described our situation. But the U.N. secretary general, António Guterres, is spot on with the term “climate catastrophe”!

With so many people, talk of our disrupted climate is met with a sigh or a shrug. Another large group of people are climate deniers whose misinformation is often broadcast loudly. Climate activists who wisely speak of renewables and sustainability are often viewed as odd.

We need a multilevel transformation. Many people desperately need an attitude adjustment, and the environment is screaming for a dramatic shift away from fossil fuels. We need to realign agricultural practices and plant millions of native trees.

With the glow of Glasgow starting to wane, we need to listen to the U.N. leader’s startling message.

I write to highlight the importance of “For Working-Class Boys, Religion May Be the Key to College Success,” by Ilana M. Horwitz (Opinion guest essay, March 16).

Opinion Conversation
The climate, and the world, are changing. What challenges will the future bring, and how should we respond to them?

Among my crowd of San Francisco progressives, religion is considered seriously down-market, with religious belief belittled. Perhaps this essay will help elites understand that for non-college-educated people of all races, churches often provide the kind of hopefulness, future orientation, impulse control and social safety net that college-educated elites get from their career potential, their therapists and their bank accounts.

Social class is expressed through cultural differences; elites’ failure to understand this enables the far right to sculpt the resulting class anger into economic populism.

Joan C. Williams
San Francisco
The writer, a professor at the University of California Hastings College of the Law, is the author of “White Working Class: Overcoming Class Cluelessness in America.”

While Ilana M. Horwitz points to religion as a key factor contributing to higher rates of college completion for working-class males, the research she cites suggests a broader takeaway. It’s that young people, especially those who lack access to the social ties and support systems available to their more affluent counterparts, need to feel a sense of belonging to thrive.

Indeed, my work with young people over the past 35 years has demonstrated just how vital it is to student success to create school environments where everyone feels supported, cared for and connected to one another.

Religion may well be a valuable source of fostering connection, but I’ve seen time and time again that there is much that schools can do to build and maintain the kind of supportive communities that help young people realize that earning a college degree, along with other life aspirations, is within their reach.

Re “For $230 Million, Browns Get Watson and Their Image Pays a Price,” by Kurt Streeter (Sports of the Times column, March 21):

It speaks volumes about the N.F.L.’s values that at least four teams were desperate to sign Deshaun Watson, a man accused by 22 women of sexual assault or other sexual misconduct and the Browns rewarded him with the largest guaranteed contract in N.F.L. history, but no team has been willing to consider signing Colin Kaepernick, a quarterback who led his team to the Super Bowl, for the apparently egregious crime of peacefully protesting the undeniable inequities in the criminal justice system.

Shame on the Browns and the N.F.L.

‘I Am 77 and Appropriately Wrinkled. I Am Supposed to Look Old.’

Re “Q: Will Botox injections in my 20s or 30s mean smoother skin and fewer wrinkles down the line?” (Ask Well, Science Times, March 22):

Let me get this right: Some young women are willing to spend thousands of dollars to maybe prevent skin wrinkles when they’re older, while muting their facial expressions now. Does anyone else think this is crazy?

I am 77 and appropriately wrinkled. I am supposed to look old.

Barbara Gold
Philadelphia
The writer is a pediatrician.