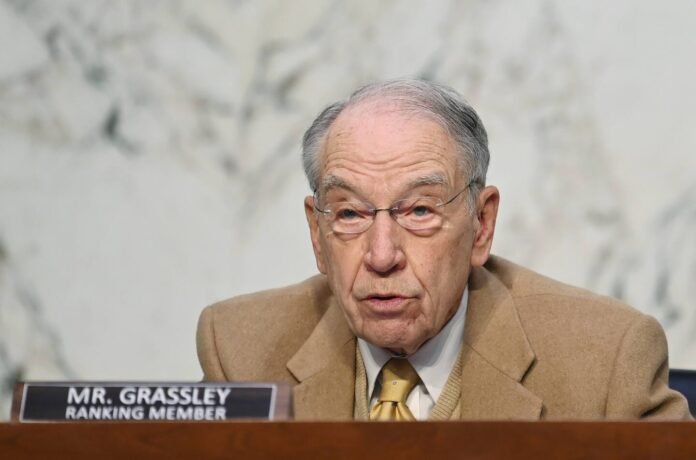 Several of its elder members were on display — and the talk of Twitter — this week as the Senate Judiciary Committee began its investigation of the Jan. 6 attack on the Capitol. Let’s just say the committee does not lack for maturity. Leading a ripe field of octogenarians was Sen. Dianne Feinstein (D-Calif.), 87, who has stepped down as the top Democrat on the committee but continues to serve. Joining her Tuesday in peppering FBI Director Christopher A. Wray with questions he had already answered in his opening statement were vintage Sens. Charles E. Grassley (R-Iowa), 87, and Patrick J. Leahy (D-Vt.), 80.

Sens. Richard C. Shelby (R-Ala.) and James M. Inhofe (R-Okla.) are 86, and Sen. Bernie Sanders (I-Vt.) will turn 80 this year, bringing the number of Senate octogenarians to six. There would have been more had two elder statesmen not decided to retire. Sen. Lamar Alexander (R-Tenn.), 80, decided to retire last year, saying he didn’t want to make the mistake of staying too long. Rare words. Sen. Pat Roberts (R-Kan.), 84, said much the same after discussions with his wife of 51 years and “at the level of maturity that I had reached, it was time.”

Wisdom may come with age, but it comes sooner to some than to others.

Yes, we all know people well into their 80s and beyond who are as active and mentally alert as others much younger. Moreover, we are what we do, and identity isn’t easily surrendered. For many people, ceasing to work feels like ceasing to be. A lawyer friend who retired and then became deeply depressed told me: “People used to pay me a lot of money for my advice, and now nobody cares what I think about anything.”

It’s silly to pretend that age shouldn’t be a consideration for certain kinds of employment. Physical labor is harder on most bodies as they age. Sure, sitting through committee meetings, attending events and showing up on a Sunday talk show while your staff writes your legislation can’t be all that taxing. But these jobs require a day-in, day-out stamina that many people in their 60s and 70s would struggle to sustain.

But features of aging, while not debilitating, are often seen as evidence of reduced vitality or mental acuity. Wrinkles and frowns take up residence in faces we no longer recognize as our own. Speech sometimes changes. Eyes become cloudy as vision fades. Gait, slowed or unbalanced, can convey uncertainty. There is a reason public people, especially women, resort to Botox and fillers. It isn’t vanity so much as job security.

Once upon a time, it was considered poor form to ask a woman’s age, and women were deemed justified in rebuffing the request. But when it comes to managing the country’s business, 80-somethings who believe their continued presence in Washington is essential to the country’s well-being may be placing pride before prejudice. The young savants following the judiciary hearing on Twitter were uncharitable toward the veterans. Time to go, they said. Retire already. One tweeted in effect: They know nothing about what this generation needs.

This may well be true, but also true is that most people don’t think of themselves as old. Inside every person over 30 is a forever-29-year-old. Some, such as Grassley and Leahy, aim to prove it. Grassley runs two miles multiple times a week. Leahy tests his mettle by scuba diving on his birthday each year, reaching the depth of his age and doing an underwater somersault.

Well, that’s something. But what? Proof that these men are ageless gladiators — or stubborn fools? Only elections will tell. Or, better yet, term limits. Not only would term limits fix most of what ails our political system, they would provide a graceful exit for old soldiers with stories to tell and miles to go before they sleep.