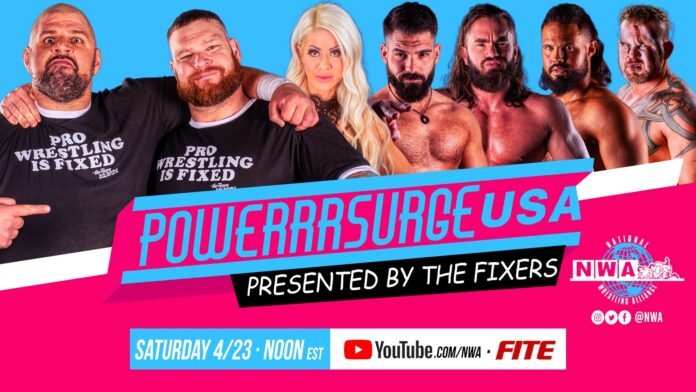 – This episode of NWA USA Powerrr Surge was hosted by The Fixers.

Collar and Elbow Tie Up. VSK backs Taylor into the ropes. The referee calls for a clean break. Strong lockup. Taylor walks VSK into the ropes. Quick shoving contest. VSK drop steps into a side headlock. Taylor reverses the hold. VSK whips Taylor across the ring. Taylor drops VSK with a shoulder tackle. VSK pops back on his feet. Taylor pulls VSK down to the mat for a one count. VSK with a leg sweep for a one count. VSK pulls Taylor down to the mat for a one count. Misfired Clotheslines. Hair Pull Exchange. Taylor with forearm shivers. VSK with a drop toe hold into the middle rope. VSK nails Taylor with The Pump Kick. VSK with a Slingshot Senton. VSK flexes his muscles. VSK with a BackBreaker. VSK bodyslams Taylor. VSK with a quick splash for a two count. VSK uppercuts Taylor. Taylor reverses out of the irish whip from VSK. Taylor sweeps out the legs of VSK.

– Don’t forget to get your replica NWA Belts at fandubelts.com/NWA

Collar and Elbow Tie Up. Rockett backs Love into the turnbuckles. Rockett pats Love on the forehead. Love Spears Rockett. Love transitions into a ground and pound attack. Rockett regroups on the outside. Love with a forearm smash. Love slams Rockett’s head on the top turnbuckle pad.

Love rolls Rockett back into the ring. Love ducks a clothesline from Rockett. Love with a NeckBreaker. Love levels Rockett with a Body Avalanche. Rockett denies The Running Bulldog. Love sends Rockett into the ropes. Love connects with The Botox Injection to pickup the victory.

Checkout Episode 306 of The Hoots Podcast