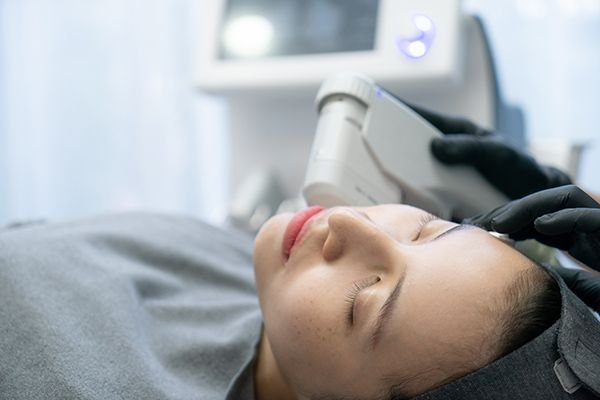 Combination therapies are often employed to help achieve superior clinical outcomes in the treatment of acne scars. Both calcium hydroxylapatite (CaHA) and high intensity focused ultrasound (HIFU) are effective monotherapies; however, the combination of these two modalities did not demonstrate any enhancement clinical efficacy in terms of a synergistic treatment effect, according to findings from a recent study.1

Researchers assessed the safety and efficacy of CaHA monotherapy and its association with HIFU for the treatment of moderate-to-severe atrophic acne scars. The study included 20 female patients (median age 39 years) who were evenly randomized to receive either 3.0-ml CaHA (Radiesse, Merz) treatment (0.1 ml at each injection point) or 3.0-ml normal saline solution serving as placebo control. After four weeks, all patients received 400 lines of HIFU (Hifu Finesse, Biotec Italia) therapy delivered by a 10 MHz transducer at a 1.5-mm focal depth able to reach the deep dermis. Patients were followed-up and results were compared to baseline at one, three and six months after the first treatment.

The treatment was performed in a double-blinded manner, as the physician performing injections and the patients did not know whether CaHA or placebo was administered. Each patient received a full-face treatment except for the upper third (forehead and eyebrows), lower lids and submental area. Improvement assessments were made using before and after digital photographs and Antera 3D (Miravex), providing qualitative and quantitative analysis of wrinkles, texture and hemoglobin.

No side effects were reported during the study, underscoring the safety of each individual treatment modality, and all patients completed the study. Results showed that at one month, patients treated with CaHA significantly improved from their baseline wrinkles and skin texture compared with those who received placebo. At the three and six-month follow-up, all patients showed significant improvement in their wrinkles, skin texture and hemoglobin when compared with baseline. Patient satisfaction questionnaires (PSQ) revealed that patients were moderately satisfied at one month and satisfied at three and six months post-treatment.

“Patients receiving CaHA monotherapy demonstrated a significant improvement in wrinkles and skin texture when compared with the control, but its combination with HIFU failed to show any difference with HIFU alone. The lack of apparent synergy may be explained by the fact that HIFU was already so effective as a monotherapy in regenerating dermal tissue that the adjunct of the CaHAwas not clinically relevant,” said Antonino Araco, M.D., cosmetic surgeon at University Tor Vergata of Roma, Aesthetic Medicine Department, Rome, Italy, and head-author of the study.

The HIFU treatment regenerated collagen and increased vascularity of the targeted tissue when used as a monotherapy. Calcium hydroxylapatite treatment alone has been proven effective as a dermal bio-stimulant and, according to Dr. Araco, there is rationale for its association with HIFU. From a scientific perspective, Dr. Araco says that it would be necessary to investigate this potential synergy with a larger cohort of patients.

“We believe that our study proves that both CaHA and HIFU in monotherapy are safe and effective treatment modalities for the improvement of atrophic acne scarring. However, this is a preliminary study and further randomized prospective studies are needed to address the study’s limitations and further explore such combination treatment approaches for acne scars,” Dr. Araco says.