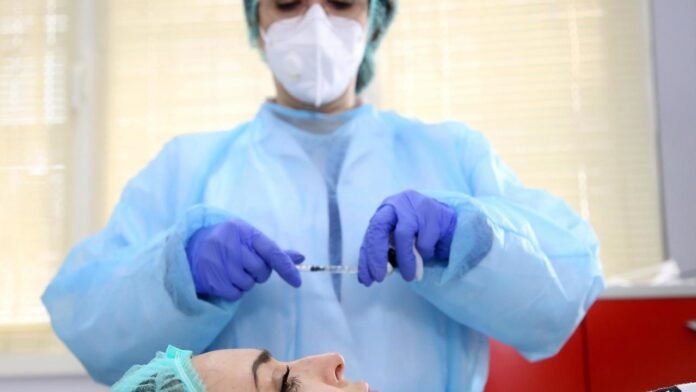 Pandemic stress, the focus on faces during video chats and the convenience of hiding under a mask are fuelling a cosmetic surgery boom in Albania — but rogue operators are putting some patients at risk.

Doctors say the surge has been driven by demand from mainly young women such as Ana Kela, a 20-year-old student in Tirana who had her lips plumped in December.

“Every time I looked at my face on the screen, I couldn’t even say a word, I was gripped by anguish,” Kela said of seeing herself during online classes at the University of Tirana, where she studies economics.

“I thought I looked ugly, dark circles under my eyes, my nose was too big, my lips were very thin, a real disaster.”

After an operation to increase the volume of her lips, she is pleased with the result.

But in a country where the informal economy is vast, many patients are being lured into unprofessional and ill-equipped beauty centres who are touting cheap prices and promotions.

New salons are popping up daily with offers for a range of treatments without medical approval or supervision, said Dr Monika Fida, a professor at the University of Medicine in Tirana.

Advertised on social media, the low-cost offers are attractive in a country where average monthly salaries hover around 420 euros.

“Come as a group of four to enjoy a discount of more than 50 percent” on lip plumping and buttock lifts, reads one ad.

“Life isn’t perfect, but your eyebrows are,” says another.

These salons “use equipment that should be handled only by specialists and licensed doctors”, said Dr Brunilda Bardhi, who specialises in laser and mesotherapy treatments that tighten skin.

According to field surveys carried out by an association of dermatology and cosmetic doctors that Bardhi leads, around 70 salons in Tirana have laser equipment operated by unqualified personnel.

Eva Kola, a 21-year-old political science student, trusted a salon whose work she was following closely on Instagram.

For 20 euros, she paid to have her ex’s initials erased from her finger tattoo.

But the quick fix did not go as planned.

“For a week now, my life has been hell,” she told AFP, holding back tears, in the waiting room of the dermatology department of the University Hospital of Tirana.

The badly calibrated laser caused a third-degree burn and a strong allergic reaction.

She has fever and unbearable pain along her arm.

“In my clinic alone, I have five to seven cases, mostly young girls, with serious problems, burns, infections, scars as a result of procedures carried out” in beauty centres without professional medical staff, said Dr Fida, showing images of patients whose work went awry.

Dr Kostandin Balloma, director of the Luis Medical Centre in Tirana, estimates that 30 percent of his clients are victims of “mistakes made by non-specialised establishments”.

Albania’s cosmetic sector is supposed to be regulated by a 2017 law, but doctors say it is too vague, lacking specificity on who can carry out which treatments and with which products and equipment.

There needs to be “a strict regulatory framework where all the professional procedures and all the links in this chain are clearly detailed,” the president of Albania’s Order of Doctors, Dr Fatmir Brahimaj, told AFP.

Doctors say the top-selling treatments during the pandemic have been focused on the face — Botox injections, facelifts and other forms of reshaping — though breast and buttock surgeries continue to be popular.

With obesity seen as a risk factor for those who contract Covid-19, liposuction is also in demand among those who hope it could help.

“The trend is clear. Nose operations have almost doubled” since the end of lockdown measures in July, said Dr Balloma.

“Cosmetic surgery is seen as a comfort, a way to alleviate the insecurity of our daily lives and to take refuge in a world that smooths the face,” he added.

Jorida Zegali, clinical psychologist at the University of Tirana, says that “the pressure of virtual communication” has heightened the focus on appearances, becoming an “obsession”.

There has also been pressure to re-emerge from long periods of confinement improved in some form.

Nertila Rrahmani, 31, is a manicurist in Milan but returned to Tirana to undergo surgery on her nose because she was experiencing breathing problems.

She also took the opportunity to tweak its shape and pin back her ears so that they appear smaller.

Still wearing the bandages post-surgery, she explained that the operation “will let me get rid of the psychological uneasiness that I’ve been stuck with for years.”

“Despite everything,” she added, “the pandemic has not been able to prevent people from loving themselves and improving their appearance through aesthetic treatments to make them feel even more beautiful.”