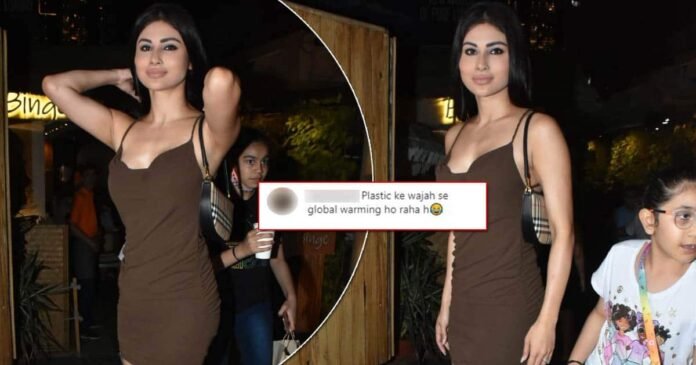 Mouni Roy began her journey in showbiz with the iconic Television show Kyunki Saas Bhi Kabhi Bahu Thi. Her looks as Krishna from the show often go viral on social media and netizens speculate if she has gone under the knife. The actress has never really answered the question with a yes or no but trolls are back again targeting her for her transformation. Scroll below for more details.

Many feel that Mouni underwent plastic surgery and probably opted for fillers for her lips. There is a visible difference from the pictures that go back to the time when she entered showbiz. Although there are always chemical treatments that actors opt for to maintain a healthy skin, it remains debatable whether it could provide such diverse results.

Albeit, last night, Mouni Roy was spotted in the city along with her husband Suraj Nambiar. The actress opted for a brown bodycon dress and completed her look with a pair of sneakers and a trendy side bag. While her date night was visibly a happy one, it was netizens who had her on her radar over her allegedly different look.

As soon as the video surfaced on the internet, speculations began if Mouni Roy had gone under the knife again.

Another commented, “She resemble Kylie Jenner”

A user questioned, “What’s wrong with her face”

On the professional front, Mouni Roy will be next seen in Brahmastra. The film directed by Ayan Mukerji also stars Ranbir Kapoor, Alia Bhatt and Amitabh Bachchan.

Must Read: Varun Dhawan Would Have Preferred Anurag Kashyap Over Karan Johar For His Launch: “Obviously, No One Was Taking Me Seriously Then”