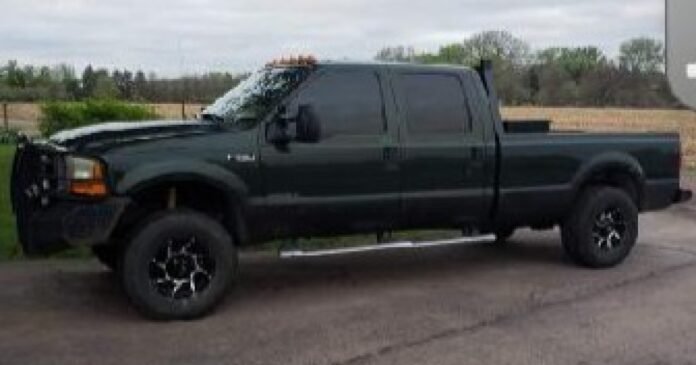 AURORA, Colo. — An out of town family in Colorado seeking medical treatment ended up stranded after a thief stole their car or truck, and it’s not the first time.

The latest victims, a South Sioux City, Nebraska couple, drove nearly 800 miles so their 4-year-old son could get treatment at Children’s Hospital. Aaron and Cheyanne Merithew brought Landon to Colorado for botulinum injections.

“He was diagnosed at 5 months old — quad-spastic cerebral palsy,” Aaron said. “He can’t walk. He can’t talk. He can’t eat on his own. He has a feeding tube. Basically, we have to do everything for him.”

“It’s a form of botox they inject into his joints, his arms and legs to try to alleviate the pain in his muscles. It works,” Aaron said.

As the family was getting ready to head back to Nebraska early Thursday, they noticed their pickup truck wasn’t in the parking lot of the Red Lion Inn just off I-70 and Airport Boulevard.

“At first, we thought maybe someone just towed it for some odd reason,” he said, “so I called police.”

They checked with impound, which didn’t have it.

“That’s when we realized that it had been stolen,” Aaron said. “We’re 800 miles from home and don’t have any means of transportation.”

“It’s a beautiful truck,” he said. “It has five cab marker lights across the top.”

He said they put a lot of effort into fixing it up. Landon’s child seat was also inside, as well as several mementos from Aaron’s time as a firefighter.

“I had a tool box in the bed. It had a lot of tools inside,” Aaron said. “I’m a diesel mechanic by trade, and I had a lot of stuff in there — a complete onboard air system. If someone’s got a flat tire, I’ve got air. I can air up a tire or change a tire for you in a hurry.”

“We just want our truck back,” Cheyanne said, adding that her son’s car seat had some special modifications.

Aaron called the theft, “disheartening.” He said he grew up in central California, two hours away from the mountains, and was looking forward to bringing his wife and son to Denver.

“I love the mountains,” Cheyanne said.

“Then this happens,” Aaron said. “Boy, what a way to kick a guy when he’s down.”

The couple called Aaron’s parents, and his mom dropped everything to rent a car, drive across Nebraska, pick them up and take them back home.

Now, the couple is wondering what will happen when they bring Landon back for another treatment six months from now.

“Will we be carjacked?” Aaron said.

Cheyanne has a message for the thief or thieves.

“You’re not just stealing from two grown adults,” she said. “You’re stealing from a special needs child who needs to have this medical [procedure] done, and we’re left vehicle-less.”

The Merithews are issuing a plea for everyone to keep an eye out for their 2000 Ford F-350 with Nebraska License Plate number 70-506H.

If you see the pickup truck, contact the Aurora Police Department.

Denver7 Gives is also helping raise money for the Merithew family in their time of need. To to donate, select “Truck Stolen During Hospital Care” in the dropdown menu on the Denver7 Gives donation page.

Shoppers Say This On-Sale Retinol Reduces Wrinkles So Well, People Asked If They Got Botox