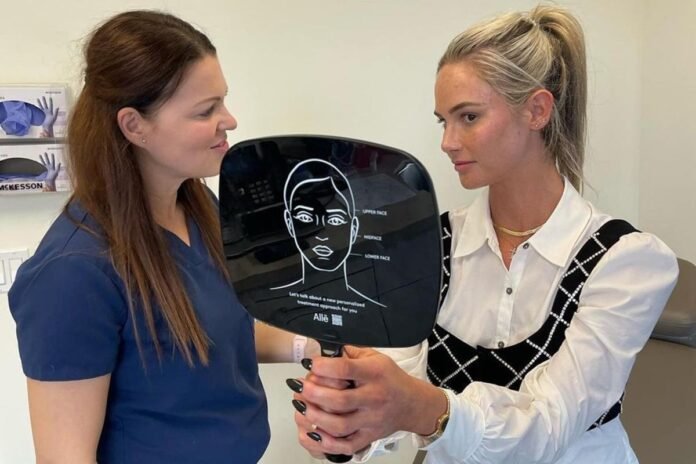 Meghan King is finally feeling good in her skin after her recent cosmetic procedures.

On Wednesday, the former Real Housewives of Orange County star, 38, shared a series of Instagram photos and videos showing off the results of her breast implant exchange and rhinoplasty. She told her followers that she feels more confident and beautiful after previously being her biggest critic.

“I guess it’s easier to stay true to my #filterfree2023 commitment when I recently made some surgical and non-surgical ‘filter’ adjustments @cosmeticare_ with Dr Niccole,” King captioned her post, which also featured a video of her getting injections into her chin.

“I’ve always been outspoken about any enhancements I’ve had (this time I wanted the fullness in my breasts back and a little cleavage, and since I was under anesthesia I opted to tweak the tip of my nose for a minor adjustment),” she continued.

RELATED: Meghan King Reveals She Had Work Done on Her Nose and Breasts as She Shows Off the Results

RELATED: Meghan King Opens Up About ‘Feeling Inadequate’ While Using Social Media: It ‘Can Be So Insidious’

King explained that she felt masculine because of her “wide” chest and wanted to change it. She said her decision for “cosmetic enhancing” still aligns with the message of authenticity that she hopes to send to her fans and followers.

“Living authentically doesn’t have to make sense to others, my mind is allowed to change and I’m allowed to change. I like feeling confident but I’m my biggest critic. I’d love to look at my body and say, ‘Wow, you’re beautiful just the way you are,’ and now, with the help of a breast implant exchange, a teeny rhino, and some Sculptra to keep my face plump, I do,” she admitted. “Plus look at that body! Can you believe it bore 3 kids and gained 70 lbs? Check out that hernia! I earned that! Diastasis! Shall we compare birth stories?!”

“The point is not that we judge one another for supposed inconsistencies, but celebrate their authenticity to themself,” she ended the post. “YOU. ME. We are our OWN bosses, we run our OWN shows, and we report to OURSELVES.”

King first showed off the results of her cosmetic procedures back in October, documenting herself at her doctor’s appointment getting her bandages removed.

At the time, she posted a collage comparing how her nose looked just after her bandage was taken off to how it looked then, which marked roughly one month after surgery. King joked that her “original” nose looked similar to that of Squidward from SpongeBob SquarePants.

She first suggested her plans for plastic surgery in July 2022 by posting a bikini selfie alongside daughter Aspen, 6. King is also mom to 4-year-old twins Hart and Hayes; she shares all three with ex-husband Jim Edmonds.

“Instagram (swipe)➡️ vs reality. You made it through Monday, let it all hang out 😵🥳,” she captioned the post at the time, adding in part: “(also… new 🍈 🍈 coming soon! Ten years and three babies and mommy wants to see a 👩🏻‍⚕️🔪. How do we feel ab this?).”