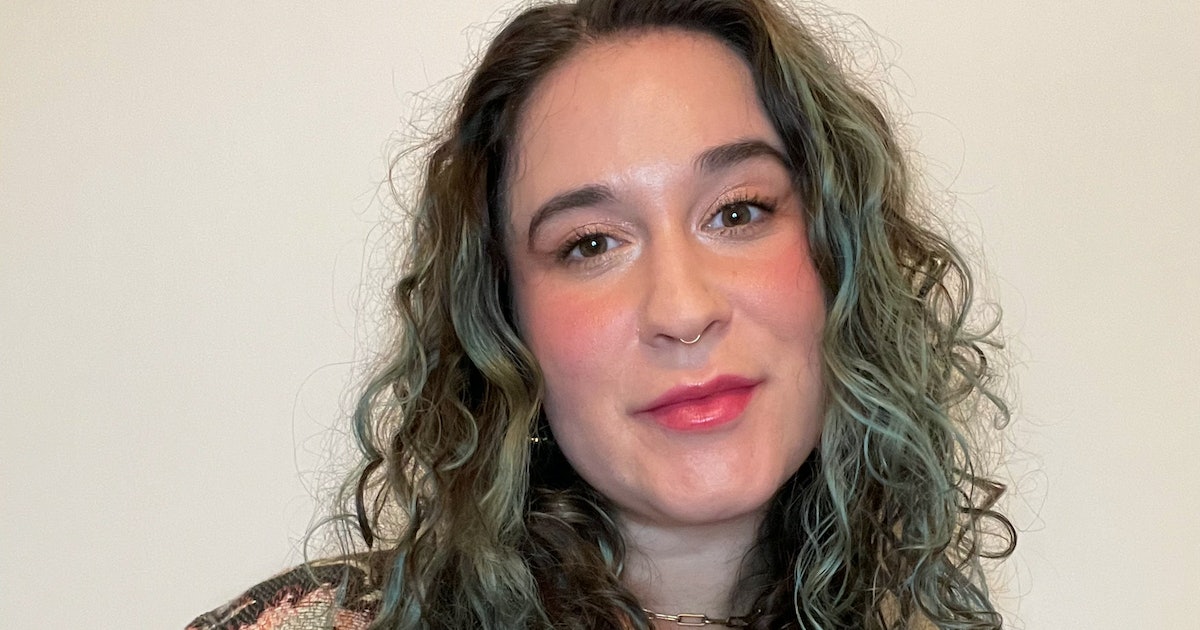 In our series Trial Run, TZR editors and writers put the buzziest new beauty products to the test and share their honest reviews. This week, our writer tested the Medicube Soy Protein Leave-In Treatment straight from Seoul, South Korea.

Because I was born with naturally curly dark-chocolate hair, I long believed I could never bleach or dye it. Although I always dreamed of having hair as bright as my makeup and tattoos, I was convinced coloring it would simply lead my spirals into, well, a downward spiral. They’d surely wilt into parched sticks of straw, right?

I found out just how wrong I was back in July 2021. In a moment of spontaneity, I made an appointment with beloved colorist Aura Friedman. For reference, Zoë Kravitz, Selma Blair, Soo Joo Park, and Natasha Lyonne entrust her with their highly-esteemed hair. My intuition told me Aura wouldn’t lead my curls to their demise. (That I was right about.)

About three hours later, I walked out of New York City’s Sally Hershberger Salon with gorgeous face-framing highlights of teal, lilac, and slime-green, as well as the recommendation to implement a protein treatment into my hair-care routine.

My hair before & after visiting Aura Friedman.

Luckily, the Medicube Soy Protein Leave-in Treatment appeared in a box of goodies my friend in Seoul sent me soon after the big day. I’ve long been a fan of the Korean beauty brand’s acne-fighting formulas, but I never considered hair care would be the next K-beauty frontier for me to explore. Thanks to the Soy Protein Leave-in Treatment, my curl damage concerns have been dashed, and I have a newfound appreciation for Korean hair-care products.

An Inside Look At Medicube’s Soy Protein Leave-in Treatment

OK, allow me to back up a bit and dive into how this hair treatment ticks. Much like Olaplex and K18, Medciube’s Soy Protein Leave-in Treatment relies on bond builders in the form of proteins and peptides to strengthen and repair damaged hair. Medicube’s option does so with a clean laundry-scented, silky liquid housed in an ergonomic spray bottle instead of a creamy, rinse-less mask. (I prefer this barely-there consistency because my hair is quite fine despite being curly.)

In Korea, protein-rich hair treatments are in high demand at the moment as younger people are becoming more concerned with hair loss, says Odile Monod, a K-beauty industry expert based in Seoul. In fact, sales of scalp and hair loss treatments are currently up 223 percent over last year, according to Korean online retail giant Gmarket. There is even a name for this trend: Gapless. 갭리스, in Korean, “describes a phenomenon in which young Korean consumers in their 20s and 30s are actively seeking out targeted anti-aging and anti-hair-loss treatments, products that were previously associated with an older demographic,” Monod explains.

This product prevents hair loss by strengthening it with a truly lightweight formula that doesn’t feel heavy on hair, says cosmetic chemist Javon Ford. Isododecane is listed first as an ingredient on the treatment’s label. For those unfamiliar, “It evaporates really quickly from hair, leaving behind the protein and emollient ingredients,” Ford tells TZR.

The protein he’s referring to is a whopping 11 different plant-based ones sourced from corn, soy, rice, potatoes, barley, almonds, and oats — just to name a few. All pack high levels of amino acids. “Proteins, in general, are good for high-porosity and damaged hair,” Ford explains. “They temporarily fill in cracks caused by heat or chemical damage.”

As for the emollients, Ford mentions the soybean and sunflower oils added to the elixir. These lipids “fill in cracks in the cuticle to help hair feel smoother,” Ford says. Coconut oil also made the ingredient list, which “can actually penetrate into the cortex for additional conditioning,” he adds.

However, chemical compounds that aren’t exactly household names — namely isoamyl laurate and alkyl benzoate — are what do most of the heavy lifting in the moisturizing department, Ford says. The former especially helps hair absorb every bit of hydration.

My Curls After Using The Soy Protein Leave-in Treatment

Science aside, I swear the Medicube Soy Protein Leave-in Treatment is everything my hair needed to maintain its softness, shine, and definition after everything I’ve put it through. Because it has been several months since Friedman has touched my hair, I now maintain the teal color every six weeks with Shrine’s Aqua Drop It Kit.

Typically I wash my hair every three days with the Sky Organics Wash Day Shampoo and Detangling Conditioner. Every other time I do so, I spritz the Soy Protein Leave-in Treatment throughout my hair — from roots to tips — after I get out of the shower and towel dry it. Next, raking my fingers through my hair helps evenly distribute the product. Then, I’m all set. My curls look best when I let them air dry before bed.

In the morning, I wake up with stunning, springy curls. The treatment makes them so much more manageable than they typically are even sans coloring. During the dry winter months, in particular, my coils get incredibly crispy and tangled. Now, they are smooth, nourished, and perfectly separated. I hardly have to slather them with a hydrating hair mask to reboot them.

The key is to not reach for the treatment that often so as to avoid loading up your hair with protein. You only really need it once a week at most to reap its rewards. “The buildup of unnecessary protein blocks moisture from being able to move deeper into the inner structure of the hair fiber,” certified trichologist Bridgette Hill previously told TZR. As a result, hair could become brittle and even more damaged than it was to begin with.

With once-a-week use of the Medicube Soy Protein Leave-in Treatment, my curls look no worse for wear. If I could naturally grow teal hair, this is what it would look like. With this in mind, I’m convinced I should add more streaks to my hair. They can definitely handle it now with the powers of the Medicube Soy Protein Leave-in Treatment in my hair-care arsenal.

Do You Need The Medicube Soy Protein Leave-in Treatment?

Protein treatments are often priced in the $30 to $75 range for a teeny tiny bottle. The Medicube Soy Protein Leave-in Treatment, on the other hand, is just $29 for a 6.76 fluid ounce bottle. Because you only need a couple of spritzes once or twice per week, the bottle lasts a couple of months.

Also, you don’t necessarily need to have either colored or curly hair to take advantage of the treatment’s benefits. It also acts as a heat protectant if straightening or curling your hair is your thing. It keeps your hair nourished, smooth, and shiny no matter what state it is in.

Oh yeah, and you don’t have to worry about getting someone to send it to you via Korea Post. Luckily, the Medicube Soy Protein Leave-in Treatment is readily available in the U.S. on medicube.us. And you get to have bragging rights that you’re ahead of the K-beauty hair-care wave that is sure to hit America soon.

We only include products that have been independently selected by The Zoe Report’s editorial team. However, we may receive a portion of sales if you purchase a product through a link in this article.