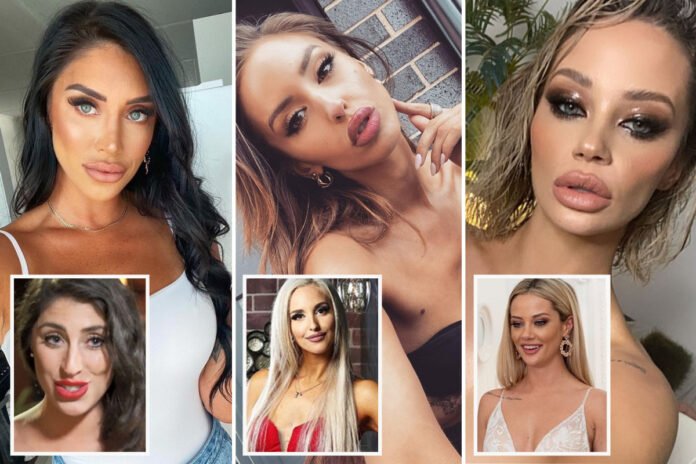 MARRIED At First Sight Australia brides have shocked fans after dramatically transforming their appearance after the show – from Botox to surgery.

The reality show has become a smash hit here thanks to all the romances, rows and romping between contestants.

The show which was first filmed in Australia in 2018 but is only airing in the UK now has viewers hooked – however many of brides and grooms are almost unrecognisable now.

Here’s a look at some of the most shocking image overhauls from series six.

She was a latecomer to the show, but Tamara Joy, 31, didn’t fail to make an impression when she entered along with partner Dan Webb.

She looked unrecognisable after extreme surgery two years after Dan ‘cheated’ on her with fellow contestant Jessika Power.

She showed off her nose job after undergoing rhinoplasty shortly after the series ended.

The star explained that she had the tip slightly lifted and the bridge straightened and filled.

Tamara looks worlds apart from her appearance on the show – she previously admitted to getting lip fillers and recently posed with a fuller pout.

She also revealed that she had a breast enlargement leaving fans shocked with her transformation.

A number of fans flocked to comment on the stars changing appearance, with one writing: “Oh wow! What happened to your face???”

Another posted: “You look stunning Tamara, but your face has completely changed.”

Elizabeth had a rocky time on the show with her ‘husband’ Sam Ball body-shaming her in one of the first scenes – saying he’d normally date much smaller women.

The jewellery store worker decided to opt for the 5:2 diet, which involved eating less than 600 calories a day on two consecutive days every week.

Additionally, Elizabeth started hitting the gym several times a week in a bid to “reduce stress”.

She suffers from porphyria, a blood disorder that affects the liver and other organs.

Of her new look, she previously shared: “It’s still very much me.

“I know people are going to say, ‘Well, you look completely different to how we saw you [on the show]’  – but don’t always focus on the outer shell.

“This has always been me. We grow, as people. I don’t glorify weight [loss] and be like, ‘I’m better now’.”

The reality star, 30, has had £25,000 worth of cosmetic procedures – including expensive ‘Picasso’ porcelain veneers.

She told The Sun: “When the dentist redid my mouth it changed the alignment and it was sort of like having a jaw reconstruction too. I also get Botox in masseter muscles, that’s why my face now looks a lot different.”

Ines said that her look is “more effortless” than British reality television personalities.

The reality star revealed admitted that she’s “addicted” to going under the knife.

The 28-year-old, who married farmer Mick Gould on the show before ‘cheating’ with Dan, revealed she’s had a “fat transfer” boob job, Botox injected into her jaw and forehead and cheek fillers.

She also splashed out on tear trough fillers, smile line fillers and 20 porcelain veneers in the past 18 months.

Last year, she also had all of her “botched” lip filler dissolved and more injected to make her pout bigger than ever.

She told Sun: “I can’t stop and think I’m addicted.”

“I’ve always wanted bigger boobs but didn’t want silicone implants, and a doctor said he could take fat from my thighs and inject it in my chest. I went from a B-cup to a D-cup.

“Watching the show back my lips were horrendous and I can’t believe I went on TV looking like that.

“I haven’t changed how I look because of the public response and trolling, but it has made me more self-conscious. I’m going to get a BBL [Brazilian bum lift] next.”