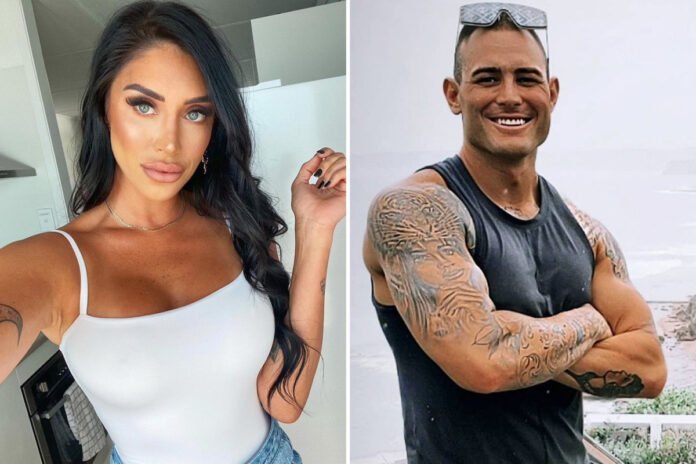 THEY became overnight stars Down Under in 2019 thanks to their tears, tantrums and romance scandals… and now that fame has gone global.

The stars of Married At First Sight Australia have kept UK viewers hooked to their screens in recent weeks, as the show airs here two years later – but many of brides and grooms are almost unrecognisable now.

She was a latecomer to the show, but Tamara Joy, 31, didn’t fail to make an impression when she entered along with partner Dan – only for him to choose Jessika Power over her.

She underwent a major image overhaul after filming, however, and even had rhinoplasty shortly after the series ended.

The reality star has since showed off the results of her nose job, with the tip slightly lifted and the bridge straightened and filled, on Instagram – while she regularly shows off her incredible figure in very glam photos too.

She had a horrible time of it on the show with her ‘husband’ Sam body-shaming her in one of the first scenes – saying he’d normally date much smaller women.

The reality star, 30, has had £25,000 worth of cosmetic procedures – including lip filler, Botox and expensive ‘Picasso’ porcelain veneers.

Sam, 27, was the heartthrob of the series – albeit an unpopular one – but he has shocked fans ever since with some very different looks.

While he initially shaved his hair and beard off completely, he’s since opted for a very short do and extensive tattoos covering his biceps.

Fans turned against Sam after it was claimed on the show that he spent the night with Ines. However, he has since claimed it wasn’t as it appeared – and the alleged affair was fake.

He’s now regularly seen in the gym and touring Australia, having shunned the MAFS reunion.

Matthew Bennett was the brave groom that entered the show a virgin, before sealing the deal with ‘wife’ Lauren Huntriss on their honeymoon.

Sadly the pair weren’t to last, but he hasn’t let it get him down – and not only has he settled down with someone else, he’s also become a major sex symbol since (with a hot semi-naked photoshoot to prove it).

The 31-year-old has been inundated with X-rated messages from fans ever since, but he’s only got eyes for one woman – new girlfriend Annabel Jameson, who he fell for while she was travelling Down Under.

The couple recently celebrated their two-year anniversary, with Annabel now on a de-facto partner visa to remain in Australia with the hunk.

Reality star Martha, 30, successfully remained in the spotlight throughout the series thanks to some subtle meddling – but she looks very different now.

While she was known for her glam outfits and long brunette locks during filming, she’s now dyed her hair blonde and often shows off her gym-honed figure and impressive makeovers on Instagram.

Unlike many of her co-stars, Martha has remained with her partner Michael ever since – who has also changed a fair bit in the last two years.

While he was known for his long hair, which he usually wore tied up on the show, he’s now shaved it off completely.

Billy had a tough time on MAFS thanks to his doomed marriage to Susie Bradley, but he’s shown her exactly what she’s missing since.

Two years on from his on-air wedding, bulked-up Billy has been showing off his muscles after getting ripped.

He’s also grown facial hair and styled his hair differently as he tries to move on from marrying the show’s “most hated bride” – who was blasted for her constant rows and mood swings.

While some stars have made some subtle changes, many people would struggle to even recognise Dino if they passed him in the street now.

The meditation and spirituality coach, 36, now has a big bushy beard and has bulked up in the gym.

Dino constantly cut a cool figure around the dinner table as the MAFS couples traded relationship stories. And he told The Wash that his new beard is just an extension of that patient behaviour.

He said: “People got to see my patience at the MAFS dinner parties but having a beard now is the ultimate proof of patience.

Dino is reportedly now dating a woman he met in Hong Kong, where he is now based.

The reality star revealed her big spend as she admitted that she’s ‘addicted’ to going under the knife.

The 28-year-old, who married farmer Mick Gould on the show before ‘cheating’ with Dan, revealed she’s had a ‘fat transfer’ boob job, Botox injected into her jaw and forehead, cheek fillers, tear trough fillers, smile line fillers and 20 porcelain veneers in the past 18 months.

Meanwhile, Mick couldn’t have gone more the opposite way, embracing farmer life and settling down with his new girlfriend in the outback. He even grew a bushy moustache at one point, embracing a natural look.

Much like her former partner Matthew, Lauren has changed her look a fair bit ever since her short-lived marriage.

While she had blonde hair on the show, Lauren, 32, has since dyed it a stand-out red.

She’s also opted for some bold make-up in many of her Instagram photos.

Mark kept a fairly low profile on the show, enjoying an on-off relationship with partner Ning – but despite it not ending well, he’s gone on to find happiness since.

The 42-year-old has been dating his girlfriend Bianca Chatfield for over a year, with the pair looking very loved-up on social media.

And he’s embraced a silver fox look since filming, showing off a full bushy beard in his recent photos.

The reality star, 35, revealed her joy has her oldest child, Kia, 17, welcomed a baby girl into the world.

Alycia Galbraith shot to fame in series five, which aired in Australia in 2018, when she was coupled up with Mathew Lockett.

But what she didn’t share with viewers at the time was how she’d managed to shed an incredible 30kg before it began filming, after a doctor told her she was obese in her early 20s.

She’s continued with her healthy lifestyle since, and now looks just as slim as ever with a new shorter hairstyle and some very glam outfits on Instagram.

Although the MAFS couple didn’t last, she looks happier than ever now.

In one of the most dramatic transformations from series 5, however, Jo McPharlin has lost a huge 40kg since filming.

The bubbly 42-year-old now looks completely different as she continually shows off her slim waistline in a series of tight-fitting dresses on social media.

Inside Craig Revel Horwood’s Strictly-themed mansion as he sells it for £3.3m

Her relationship with ‘husband’ Sean Donnelly fell apart on the show, but she returned recently for a reunion with her other co-stars – and they were all gobsmacked by her new look.