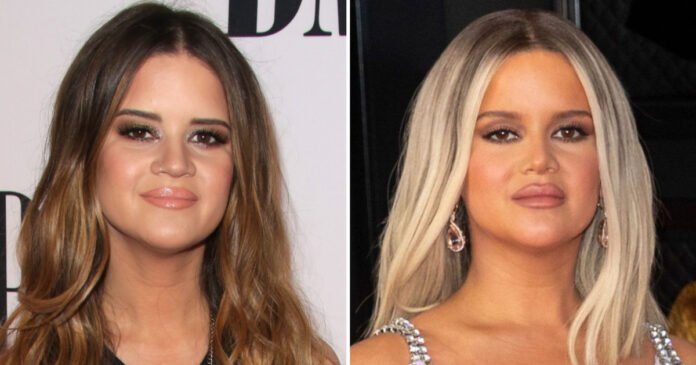 You don’t have to be a big fan of country music to know who Maren Morris is. After all, the Texas native’s songs are featured on just about every radio station these days! Plus, Maren has collaborated with other mainstream artists like Niall Horan, Sheryl Crow and Vince Gill.

The mother of one, who shares son Hayes Andrew with husband Ryan Hurd, released her first studio album, Walk On, back in 2005. However, it wasn’t until her 2016 album, HERO, that Maren became a household name. Of course, after many years of being in the spotlight, the “Common” singer has faced a lot of scrutiny, including plastic surgery rumors.

To date, the internet has accused Maren of getting lip fillers, rhinoplasty, a facelift and more. While she has never commented on those procedures specifically, Maren did clap back at a troll who told her to “stop with the Botox” via Instagram in April 2020.

“Dude, I just went through a pregnancy and we’re in the middle of a quarantine,” the Grammy Award-winner, who gave birth to Hayes in March of that year, replied. “The Botox has long worn off.” Later, in July 2020, Maren was forced to shut down yet another hater who decided to comment on the size of her breasts.

“Wavy hair as the camera is only on your tits. Yes, it’s distasteful for sure. Come on … if your caption reads wavy hair, maybe keep the focus on the hair, or, perhaps, make the caption big boobs? Just saying, holy cow. Everything in this world doesn’t make sense anymore. Clearly, these littles don’t have much to look up to either,” the individual wrote.

“Girl, BYE. Don’t let my boobs knock you on the way out,” Maren replied along with a crying-laughing emoji. Obviously, the A-lister has no problem sticking up for herself. Even so, her husband has her back, too!

That month, Maren faced backlash after she posted a photo of herself holding an alcoholic beverage and her son while sitting on a floatie in a lake. “I’d just like to say my wife usually doesn’t need me to defend her, but she’s a great mom, and my kid was not unsafe on a float in one foot of water being held by an adult with five people watching so she could get a picture,” Ryan tweeted at the time.

“Hayes has two coast guard-approved life jackets that he wears. Also, sometimes moms have a drink, and homegirl earned it,” the “Platonic” crooner wrote in a follow-up. “Later, nerds.”

In conclusion: Don’t mess with Maren and her family.

Scroll through the gallery below to see photos of Maren Morris’ transformation over the years!