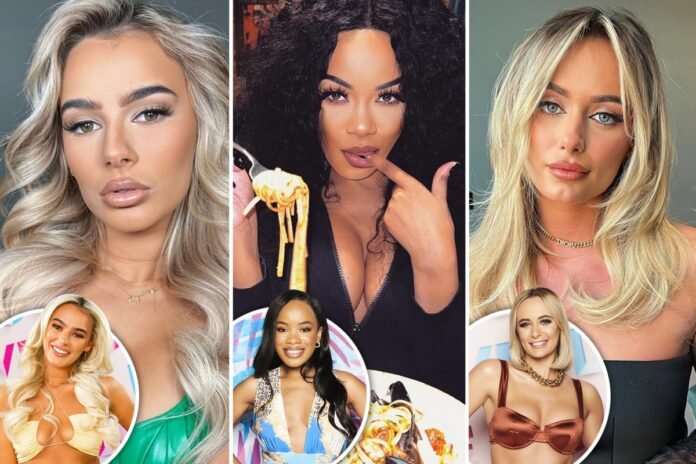 FROM filler removal, to fresh extensions and new noses – six months on from their summer of love and we look at how the Islanders appearances have dramatically changed.

ITV2 viewers were treated to a flurry of new sexy singletons last year- who paraded around the villa in their tiny bikinis for eight weeks.

But after leaving the villa, some of the stars have tried their best to shed their Love Island image – and look very different now.

We take a look at some of the stars who have opted for cosmetic treatments to non surgical procedures since they left the show.

The former lettings agent, 26, revealed in December that she had her lip fillers removed to make way for new ones.

She compared her new look to an old photo of her 4ml of filler that she had put in before entering the Love Island villa in August.

A second snap saw her lips in their natural state – while a third saw her opt for 1.5ml in a considerably less-plumped final look.

Faye documented her journey of having her fillers dissolved, as she told fans it was the first time she had seen her “natural lips” in years.

She revealed she had to have the old filler removed before starting fresh with a new treatment as part of a more natural look.

Faye has altered her looks by getting Botox, lip filler and has also had a boob job before the show.

During her time on Love Island Faye told the girls that her lips looked like “an 80-year-old man’s privates” when she got her injectables removed.

The TV star recently joked that her busy schedule is one of the reasons she gets Botox injections to smooth out lines on her face – and even joked that she’d look over half her age if she didn’t get the procedure done.

Faye recently said on PLT’s Behind Closed Doors podcast: “We’re all trying to live in our little, like, holes and just wanna be in our relationships whilst trying to do the new jobs and it’s just madness.

“And people question why I get Botox! That is it! The stress. I mean, I would look like a 60 year old woman!”

At the weekend, Faye showed off her dramatic new hairstyle – her hair looked longer and fuller after clipping in some Razzl Dazzl hair extensions.

The Devon-born lass also looked incredible with her blonde locks styled into some tight bouncy curls.

The 23-year-old shot to fame in the villa last year after kissing Liam Reardon in Casa Amor.

Despite being a blonde bombshell, she has previously said that her nose had always been her “biggest insecurity”.

Earlier this month she told her followers that she’d had rhinoplasty surgery in Manchester.

She shared footage of her in a surgical gown and clutching a soft toy with a tag bearing her date of birth around her wrist.

The star later posted a picture of her watching TV afterwards as she thanked fans for their kind wishes.

Lillie said: “I’m now out of surgery! Everything went well and I’m all good 🙌 I will try to get back to as many messages as I can, big love x.”

She told her followers: “This is hands down my biggest insecurity and has been for so LONG.

Lillie is now recovering from her painful operation, and has told fans she is having a bit of tough time, and that the surgery had left her feeling sick and unable to open her mouth.

The reality star looks like she’s on the mend after sharing a photo of her smiling and telling fans it was “happy cast removal day”.

The 21-year-old Nando’s waitress immediately found a place in the nation’s hearts thanks to her bubbly personality.

Before going on the show, she admitted to adding extensions to her hair, to make it look thick and luscious.

But denied having cosmetic procedures to enhance her appearance, sharing: “In regards to plastic surgery or anything I’m quite happy with the way I look so I wouldn’t get anything done.

“Obviously if people do get plastic surgery to make them feel more confident, then good for them – obviously everyone has their own choice.”

Since leaving the villa, Liberty has continued to defend her appearance after a troll accused her of having lip fillers.

Responding to the follower, Liberty wrote: “I actually haven’t had my lips done.

“I don’t know where all these comments are coming from, must be my lip liner. But thank you babe appreciate this.”

In January, she showed off her major hair overhaul by chopping off her golden locks ahead of her stint on Dancing on Ice.

Liberty shrugged off the comments, writing: “I have always done my makeup like this myself before Love Island. Appreciate the opinion but it’s the way I like it.

“I won’t change big lashes all the way bold eyebrows and lip liner combo is my thing. I would like to say to my followers do what makes you happy and be confidence, always BE YOU.”

The 29-year-old – who was a luxury travel specialist before going on the show – is now working as a group and sale executive for two hotels in London.

But aside from swapping fame for a new job, the TV star unveiled her glam new look on social media.

The star deleted all of her photos in January and began uploading stunning new snaps with a stylish hair transformation.

Looking different from her time on the programme, she showed off her incredible figure in a black bikini and figure-hugging dresses.

In another picture, Rachel wore a halterneck dress as she gave fans a glimpse at her wavy tresses.

The Essex beauty turned heads in the villa and left the show with Welsh hunk Liam Reardon.

Millie is one of the few Islanders who hasn’t admitted to getting plastic surgery or fillers.

Despite not going under the knife, the former fashion buyer’s administrator has overhauled her look as she adjusts to the life of a social influencer.

She recently ditched her trademark bob for some hair extensions as she attended a glitzy event.

The TV star showed off her layered look which also featured a fringe and darker roots.

The 21-year-old villa bombshell made her debut with long blonde hair and wearing a pink bikini.

The Brighton beauty has continued to wow fans on social media with a string of stunning snaps.

She recently stepped out with mermaid waves which came down to her waist.

She TV star opened up about craving plastic surgery “every day”.

Lucinda said she wanted a boob job, nose job, and veneers before going on the ITV2 show.

In a video taken before she entered Love Island Lucinda wrote: “The daily conversation I have with myself trying not to get a boob job, nose job, & veneers”

Lucinda is not the first Love Island to consider going under the knife.

Former stars have revealed how they are constantly bombarded by “disgusting” cosmetic companies trying to prey on their insecurities.

Ex contestants quickly become influencers with thousands of Instagram followers and lucrative advertising contracts – where maintaining their perfect looks counts for everything.

Arabella Chi, who appeared in the 2019 series, told The Sun she is flooded with requests from.

Ex contestants quickly become influencers with thousands of Instagram followers and lucrative advertising contracts – where maintaining their perfect looks counts for everything.

Arabella Chi, who appeared in the 2019 series, told The Sun she is flooded with requests from brands.

“On Instagram, I get inundated with requests from people trying to offer me free stuff including cosmetic treatments, ” she says.

“They just sit in my request box and I never respond.”

Samira Mighty who sensationally quit halfway through the 2018 series, was shocked to be bombarded online by clinics with offers of free treatments following her own exit.

“Coming out the villa, you get messaged a lot by [cosmetic surgery] companies saying ‘we’d love to do something to your face’,” says Samira.

“I find that so offensive if I didn’t ask for it — don’t tell people you should do this, do that, to your face.

“These companies are selling to lots of people — they want exposure. Even down to your teeth there’s always some sort of company in touch. They make you feel insecure.”