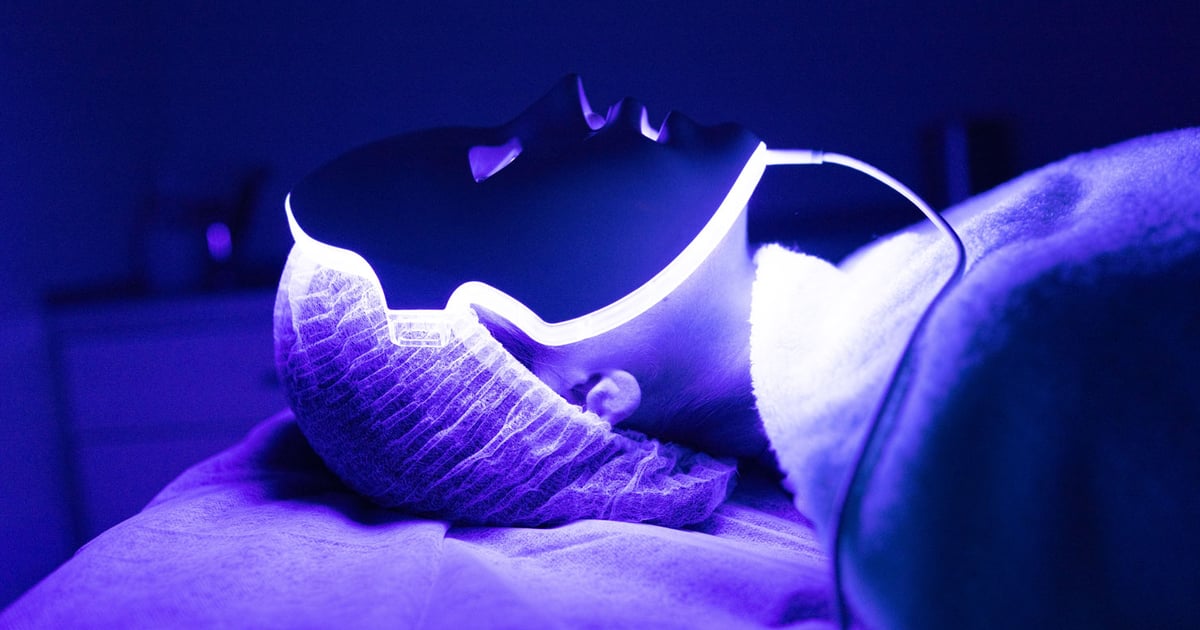 While it got its start in outer space (yes, really), LED light therapy has fast become a popular treatment here on earth that’s found in consultants’ offices and skin-care clinics, and loved by dermatologists, aestheticians, celebrities, beauty editors, and skintellectuals alike. Drawn in by the vibrant and fluorescent light, LED — short for light-emitting diode — is heroic for its healing, soothing, and transformative properties on the skin. And thanks to the advancement in the technology outside of the clinic — as well as the recent spike in popularity of self-care, including DIY facials — interest around LED face masks that you can use at home has significantly increased.

As for what you need to know, we spoke to the experts in the industry about how LED therapy has become a beaming revelation — and what you should know before basking in the colorful light on your own.

What is LED Exactly?

Light-emitting diode (LED) was originally developed in the 1960s for NASA to use in helping heal wounds of the astronauts in space. From there, research expanded into understanding the spheres around photodamage and photobiomodulation. Both alter the skin in some way, although photodamage harms the skin due to the exposure of invisible UV rays, whilst photobiomodulation — which encompasses both laser treatment and LED light therapy — uses visible red or near-infrared light to stimulate, heal, or regenerate the skin’s cells.

It’s important to note that LED is different than intense pulsed light (IPL) and laser treatments, the latter of which is a high-energy form of focused light (versus scattered light) that creates controlled damage to the skin to promote healing. In addition to not inflicting damage to the skin, LED also “transforms electricity energy into light of different colours, and therefore emits a spectrum of light in a noncoherent manner, which means this is a light device that is not a laser,” Dr. Melissa Levin, dermatologist and founder of Entière Dermatology in New York City, told POPSUGAR.

What Does LED Do For Your Skin?

“LED works directly on the mitochondria, or powerhouse, of the cells by absorbing the photons (light) and transforming it into ATP (a form of energy for the cells),” said Dr. Yannis Alexandrides, founder and director of 111Harley St Clinic in London. “ATP is then used to power all metabolic processes, it manufactures new DNA, RNA, proteins, and other products needed for skin repair.”

As mentioned above, LED transforms energy into different colors, and each of those colors affects the skin differently. In dermatology, the most studied and widely used LED light therapy include blue (407-420 nm), yellow (570-590 nm), red (630-700 nm), and infrared (800-1200 nm). There is also green LED light, but more on that in a second.

When it comes to how it affects the skin, blue LED light has the most evidence behind it. “Blue light affects acne by working on the acne-causing bacteria called propionibacterium acnes, or P. acnes for short,” said Dr. Levin. “P. acnes is a naturally occurring bacteria that lives within hair follicles. When a pore or hair follicle gets clogged, P. acnes grows and multiplies, causing inflammation, which gives you a red inflamed pimple.”

P. acnes naturally makes a group of proteins called porphyrins, and when these porphyrins absorb blue light, it causes the bacteria to die, according to Dr. Levin, adding that, when it comes to at-home treatments, “clinical studies have shown effectiveness for treatment of mild to moderate acne . . . but I do recommend continuing your traditional acne medications along with light therapy and to co-manage with your dermatologist. While the technology has advanced significantly, it’s still not enough sometimes to clear acne.”

Red light is the probably the most popular LED light therapy and considered the most effective type for boosting circulation and collagen production. Penetrating the skin deeper than any other light, red LED sends a specific receptor to stimulate the mitochondria in the cells, which has rejuvenating and anti-inflammatory results.

“Red light has been shown to increase fibroblasts and fibroblast growth factors, the former of which are the cells in skin that are responsible for making those healthy proteins that make your skin supple and soft, such as collagen and elastin. It also has been shown to increase the production of collagen and alter the amount enzymes in your skin called MMPs (or metallo-proteinases) that keep the skin young-appearing,” said Dr. Levin. Depending on the type of red light, it can either encourage new cells in wound repair (eventually reducing the appearance of scarring), have an anti-inflammatory effect, or act as a targeted treatment to stimulate collagen in the dermis for a plump and more youthful-looking complexion overtime.

Yellow light, according to Dr. Levin, “is thought to exert its effect on the mitochondria, a part of the cell that is responsible for making molecules called ATP, which are small energy packets for the cells.” Because of this, and because it has a shallow wavelength, yellow light is used both for medical and aesthetic purposes. “Yellow light helps reduce the inflammation, promote collagen, and elastin production as well as optimal wound healing”, Dr. Maryam Zamani, oculoplastic surgeon and founder of MZ Skin, told POPSUGAR.

Lastly, there is green LED light, which studies have shown to help accelerate wound healing, however, more research is needed to understand the effects it has on the skin. According to The New York Times, in a very small clinical trial on green light, participants self-reported their results and about a third believe they saw a decrease in dark spots after using the treatment, however the jury on green light’s true ability to treat hyperpigmentation is still out.

“At 111 Harley St. we use LED in a wide variety of ways. It can be used after surgery to help speed up post recovery, and either prior or after laser treatments or microneedling to help reduce redness, sensitivity, and inflammation. We also integrate it into our bespoke facials as and when a patient needs it as it’s perfect with it being non-invasive and requiring no downtime afterwards,” explained Dr. Alexandrides.

However, the fact of the matter is that at-home LED treatments can’t truly compare to the ones used in-clinic. “At-home LED devices are definitely helpful but there is a big difference between at-home and in-office devices. Simply, the power,” said Dr. Levin, highlighting that the LED devices sold to consumers aren’t as strong as the ones used in-office by a consultant dermatologist in terms of wavelength and power density. It’s why, to see results, you need to be using these at-home devices regularly (sometimes daily, sometimes three times a week, depending on the directions), and for between six to 20 minutes at a time (again, depending on the device — make sure to read the instructions carefully!).

It’s also important to make sure the device you’re investing in is safe. If opting for an at-home LED mask or tool, Dr. Levin stressed that it’s important to check in with your dermatologist to assess the device’s compatibility with your skin, the quality of the device, and wavelength production. One good marker is to check if the device has been approved by the Food & Drug Administration in the US.

For darker skin tones especially, “LED can be beneficial for all skin types and for dark skin, it can be helpful for treating acne and as a collagen boost”, said Dr. Ifeoma Ejikeme, founder and medical director of Adonia Medical Clinic in London. Although, when it comes to blue light treatments, it’s important to be extra cautious and consult a dermatologist. “Care and attention is needed with blue light in darker skin because the settings of the device need to be tweaked to reduce the risk of activating pigment producing cells, encouraging increased pigmentation.”

There is definitely a lot of promise in LED light therapy when it comes to treating your skin. It’s important to note, however, that not only is there still research to be done on the topic, but just because it looks futuristic and high tech, like any treatment it’s not going to magically and effortlessly change your skin. “I think folks think that LED light is a cure-all, especially when it comes to acne,” Dr. Levin said in summation. “Keep in mind this a complimentary to a skin-care routine and if needed, prescription medications with your dermatologist.”

Keep reading to check out our favorite at-home LED masks and machines.