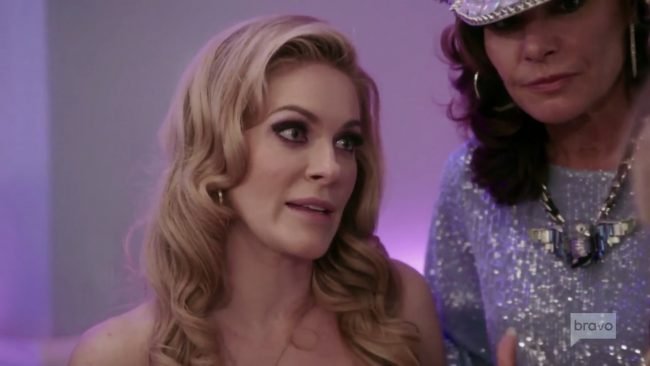 Real Housewives of New Jersey is back! That Season 11 premiere episode was everything we wanted and more. Of course, the big story involved Teresa Giudice spreading cheating rumors about Jackie Goldschneider’s husband Evan Goldschneider. Then, Jackie mentioned Gia Giudice “snorting coke in the bathroom at parties” as an “analogy” and all hell broke loose.

However, other revelations were shared during the episode too. Dolores Catania shared her latest plastic surgery results with her ex-husband Frank Catania and her current boyfriend David Principe. David, who is a doctor, wasn’t happy with her getting elective surgery. She also never told him she was getting anything done until the night before. Dolores clapped back about making her own decisions about her own body. And now, Real Housewives of New York star Leah McSweeney is speaking out, taking up for Dolores, who she says is “the hottest bitch I’ve ever seen.”

In an Instagram Story, Leah shared, “My bitches are back. Real Housewives of New Jersey. Everyone knows I love this fucking franchise so much. Of course, I love New York, but if I had to hang with another crew on Housewives, it would be these bitches.” I would love to see Leah make a cameo appearance.

“I fucking love each and every single one of them. There’s not one that I don’t like. I love them all,” Leah declared.

And then, she started giving live commentary as she watched the premiere. She said, “Oh no. David’s coming for my Dolores. She is a hot fucking bitch. I’m sorry. Whatever she got done, it looks good. David, keep your mouth shut.”

Leah continued, “You are so lucky that Dolores even looks at you, OK? Because that’s the hottest bitch I’ve ever seen. And KiKi, you know it,” she said to her daughter Kier “KiKi” Cristofaro.

Leah captioned her video rant with “I’m so triggered rn.” And after all that, she concluded, “I have to stop giving commentary because I literally will the entire time.” I wish she actually did that. I would have loved to see her commentary on the Jackie and Teresa feud. After all, her good friend Dorinda Medley has some very strong feelings about the argument. I wonder where Leah’s opinions lie.

TELL US- WHAT DO YOU THINK OF LEAH’S COMMENTS ON DAVID? WHAT DID YOU THINK OF DAVID’S OBJECTIONS TO DOLORES’ PLASTIC SURGERY?