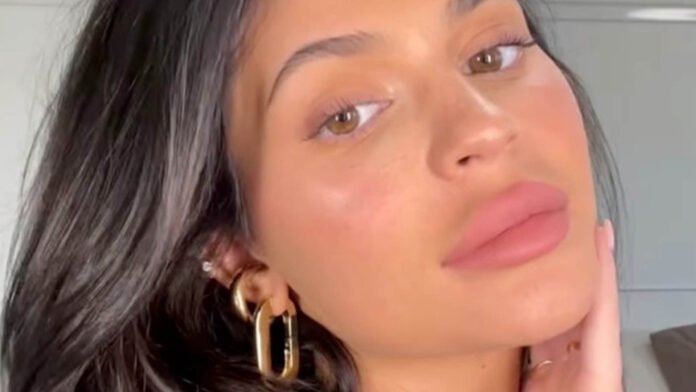 KYLIE Jenner has shared a glamorous new Instagram video applying makeup, but some fans didn’t cake on the praise.

Kylie, 24, appeared front and center in a new Instagram video from her Kylie Cosmetics page.

“our boss bae @kyliejenner trying on some of her favorite Lip Kit shades including shade “Ulta Beauty,” the video was captioned, silent aside from an ambient music background.

In it, the mom-of-two applied a bright red lip to her plump pout, which was notably large and puffy, per some fans.

With her brunette hair down and a simple black top, Kylie concluded by holding up a few sets of her famed lip kits without smiling.

Fans were not shy in painting on their concern for Kylie’s appearance, with many convinced she’s gone “overboard.”

“Giiirl put the Botox down,” one fan bashed.

“I love you but lips look way toooo big,” wrote another.

“Lips about to burst,” wrote a third under her Kylie Cosmetics page.

The first procedure Kylie ever received was lip fillers – which she did in 2015 at age 17 quickly becoming a famous fixture of her face.

Lip Kits would often sell out when she launched them that same year, as people wanted to emulate her without the fillers.

According to Kylie, the reason she initially decided to get lip injections was because of a comment a boy made saying her then lips were “thin”.

“I took that really hard. Just when a guy you like says that—I don’t know, it just really affected me. I just didn’t feel desirable or pretty. I really wanted bigger lips. I ended up getting my lips done,” Kylie once said.

Fans have speculated that Kylie has had surgery on her nose, boobs and butt, however, the star has denied these claims.

That said, her “best friend” Stassie Karanikolaou was recently a little less tight-lipped.

Stassie said on a podcast in April: “I have not had butt implants the only implants I’ve had are in my ti**ies. I’m not saying I haven’t done other things, or moved some things around.

On her own lips, Stassie said – “Lip filler” was also her “first procedure,” like the youngest Kar-Jenner sister.

The brunette beauty said that the facility she ended up at was “Not at a good place. Do your research.”

“I didn’t do it good – I looked like [she pouted her lips in the video podcast]. I looked not cute, I had to dissolve it all and get it all redone.”

Finally, comparing herself to “friends” who have gotten their butts done more “naturally” – not naming names – she added: “I did it so early, I should have waited and done that.”