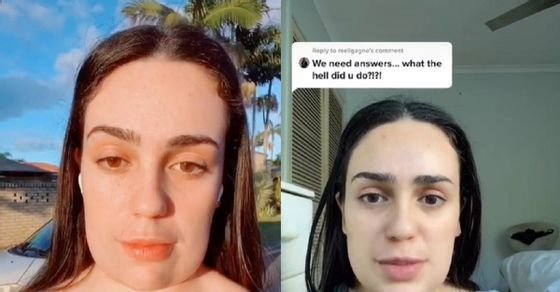 Sofia Marroquin got Kybella treatment done to remove fat from under her chin. | Image: TikTok&nbsp

A woman was left with a face “like a rectangle” after a cosmetic procedure. Sofia Marroquin, from Australia, took to TikTok to share a video of the reactions of her family and friends.

The 19-year-old woman captured the reactions of her parents, sister, best friend and a cafe owner. “So I just got some lovely needles into my face. My family has absolutely no idea what I’ve just done. And I’m about to get their reactions,” Sofia says in the video.

The video has gone viral on the video-sharing application, garnering over 3.6 million views.

In a subsequent video, Sofia explained that her rectangular jawline was due to temporary swelling after a ‘Kybella treatment’ in which injections are used to remove fat from under the chin.

“Mine was really fatty covering up my jaw so I just wanted to remove that fat – just a little bit – just to make it look a little better. That’s all. It’s still really swollen and really numb,” she added.

Sofia knew that her face would swell but she didn’t know that it would be so bad. She is waiting for the swelling to go away completely so that she can assess the results of the treatment.

Last month, Andrea Ivanova, a 22-year-old Instagram model from Bulgaria, went viral after she took 20 rounds of lip injections to quadruple the size of her lips. And she has no plans to stop as she wants to continue her lips to be officially recognised as the biggest in the world.