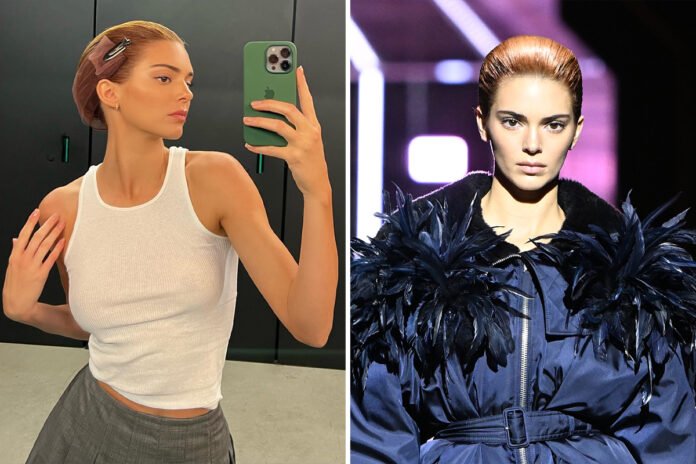 KENDALL Jenner posed in a see-through tank and showed off her new hair color after fans slammed the star’s “lip fillers.”

The 26-year-old gave a behind the scenes look at her recent gig modeling for Prada during Milan Fashion Week.

Kendall recently took to Instagram to share numerous photos and videos of her on and off the runway.

After sharing two slides of her strutting down the runway in a large Prada jacket, Kendall showed some skin while posing in a see through white tank top.

Her lighter hair was pinned back, while the Keeping Up With the Kardashians alum rocked a full face of makeup in the mirror selfie.

Following photos in the Instagram post included Kendall on the runway, as well as a look at the fitting process.

During the show, Kendall turned heads as she debuted her wild new auburn hairdo.

All eyes were on Kendall during the show, while her sister Kim Kardashian, 41, showed up to support the model.

Kendall hit the runway after KUWTK fans slammed her for her lip fillers.

Numerous fans took to Reddit to discuss her lips, with some saying she “overlined her lips as if she had injections.”

One Reddit user said: “This is like asking “why do they still photoshop if they get plastic surgery?”

Another user added: “This is so bad!”

A third chimed in: “She’s been looking different lately, too much filler? She’s naturally stunning. She really needs to stop now.”

Kendall hit the Fashion Week runway shortly after her mother, Kris Jenner, said she hopes Kendall has a baby soon.

The model has been in a relationship with NBA player Devin Booker, 25, since April 2020.

During a recent appearance on The Ellen DeGeneres Show, the host asked Kris, 66, which of her children will give her the next grandchild.

“I think it would be nice if it was Kendall,” Kris said. “She’s the only one who hasn’t had a baby.”

Ellen then questioned if she wants to have a baby.

“I think she would eventually love to have a baby,” Kris said.

Kendall previously spoke about her desire to become a mom during a March 2021 episode of KUWTK, stating: “I want kids badly … soon, too.”