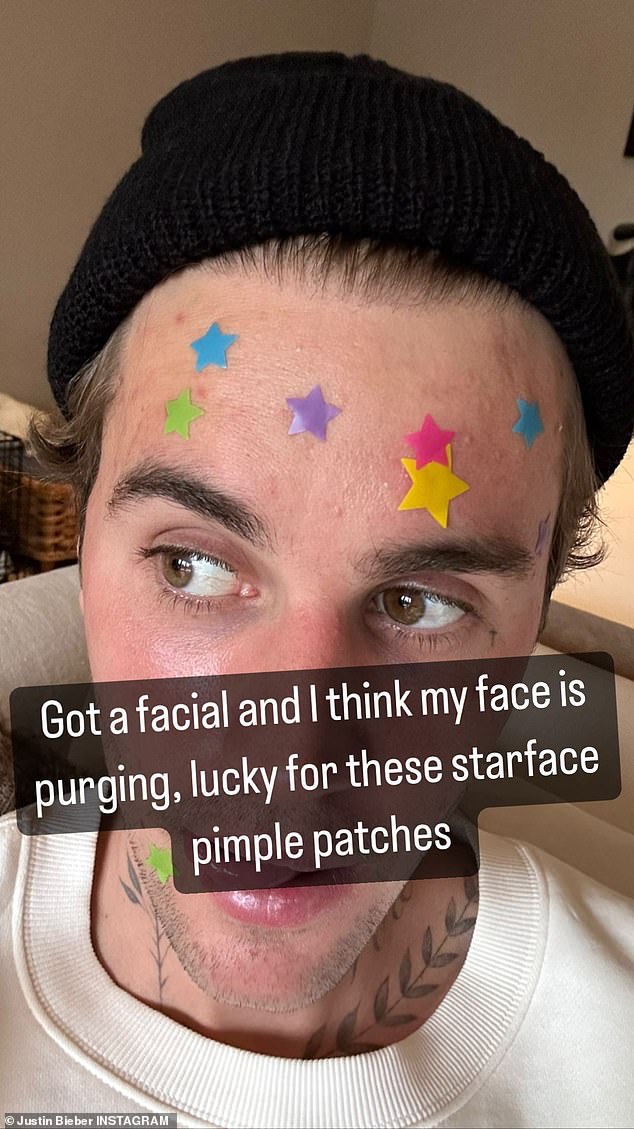 Justin Bieber kept it raw and real for his fans as he revealed that his skin is currently ‘purging’ after recently treating himself to a facial.

The singer, 28, showed off a face full of star-shaped pimple patches – which are typically hydrocolloid-based and used to ward off bacteria and absorb drainage – in an image shared to his Instagram on Thursday.

Despite the annoyance of acne – which he’s struggled with for years –  Bieber said that he’s lucky to have some patches on hand to cover up the blemishes.

Star power: Justin Bieber kept it raw and real for his fans as he revealed that his skin is currently ‘purging’ after recently treating himself to a facial. Despite the annoyance of acne, Bieber said that he’s lucky to have some star pimple patches on hand to cover up the blemishes

The Baby singer captioned that he ‘got a facial and I think my face is purging, lucky for these starface pimple patches.’

The majority of his blemishes appeared on the forehead while one resided next to the side of his mouth.

For the selfie, Bieber rocked a black beanie, a white sweatshirt along with his colorful collection of pimple patches. By wearing a crewneck, Bieber gave a peek at the tattoos along his neck, one of which appear to be some sort of leafy plant.

The Starface company claims its patches, which come in a variety of fun colors, ‘Absorbs. Heals. Protects.’ 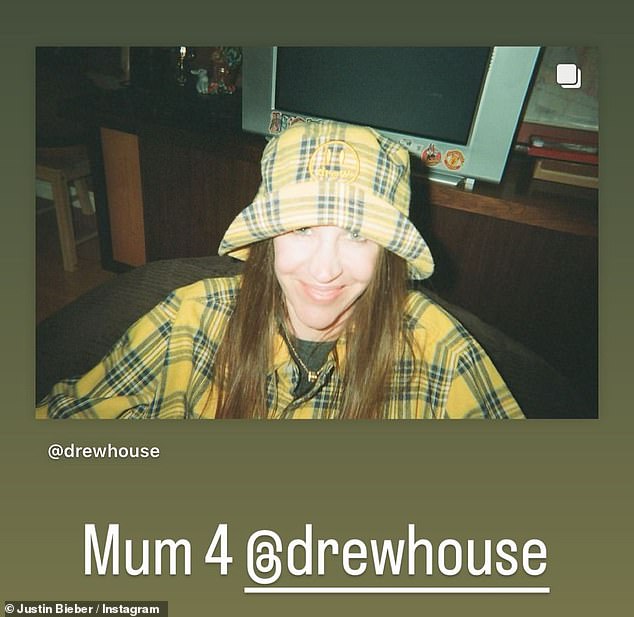 The pop star took to Instagram on Thursday and shared a photo of his mother, Pattie Mallette, representing his Drew clothing line by wearing one of its plaid ensembles 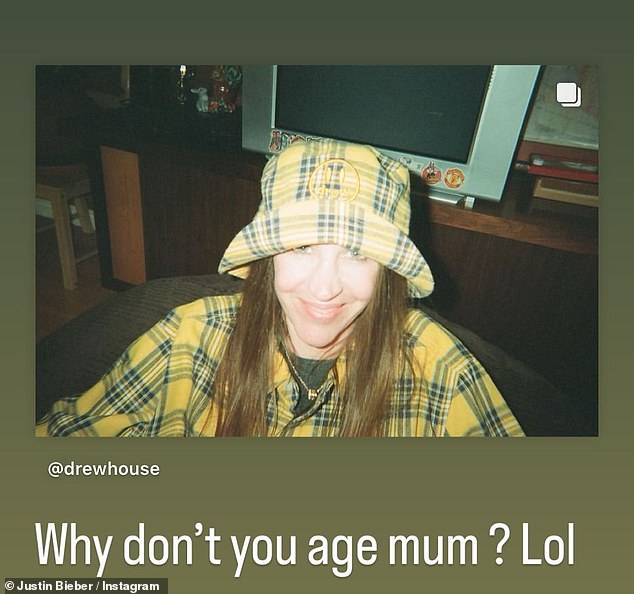 After getting a look at his mom in the Drew gear, Bieber followed up with another Instagram post of the same photo where he complimented her skin : ‘Why don’t you age mum? Lol’

They contain hydrocolloid, a chemical that’s clinically proven to help absorb fluid and reduce inflammation to shrink pimples overnight, according to the Starface website.

‘Perfectly shaped to grip the contours of the face, Hydro-Stars are designed to really stick: They shield spots from outside bacteria, which helps them heal faster’ and ‘prevents scarring.’

It turns out it’s normal to have a breakout in the form of pimples or rashes after undergoing a facial treatment, according to Skin MD.

Researchers claim the breakout is ‘the skin’s external way to detoxify, ridding itself of toxins and impurities to reveal a more luminous skin.’ 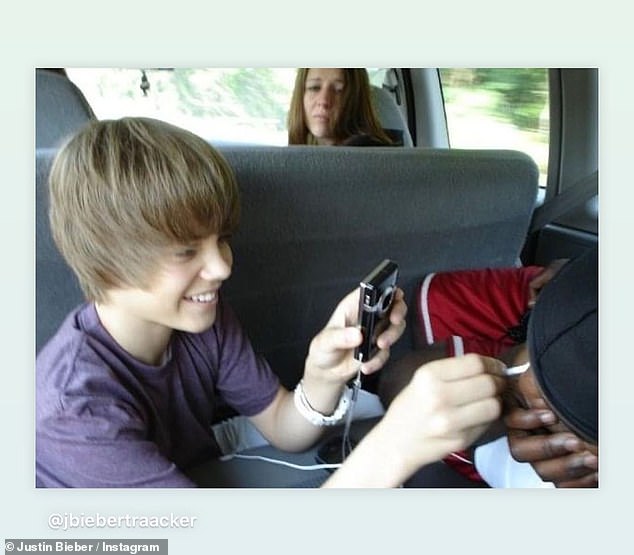 Ageless: Bieber also posted a throwback snap of himself as a pre-teen that also shows his mother in the backdrop

Doctors recommend that people who undergo a facial should refrain from applying makeup at least the day after the treatment because pores are still open. Applying makeup can clog pores which might lead to further breakouts.

He first shared a photo of his mum decked out in a yellow plaid ensemble, consisting of a shirt and matching hat from his Drew clothing line.

‘Mom 4 @drewhouse,’ he wrote below the image of the 47-year-old staring straight towards the camera with a big beaming smile.

After getting a look at his mum, looking youthful dressed in the Drew gear, the proud son followed up with another Instagram post using the same photo: ‘Why don’t you age mum? Lol,’ he gushed in the caption.

Bieber proceeded to share a throwback snap of himself being driven as a pre-teen to show how his mother has defied time, and not drastically aged so far. 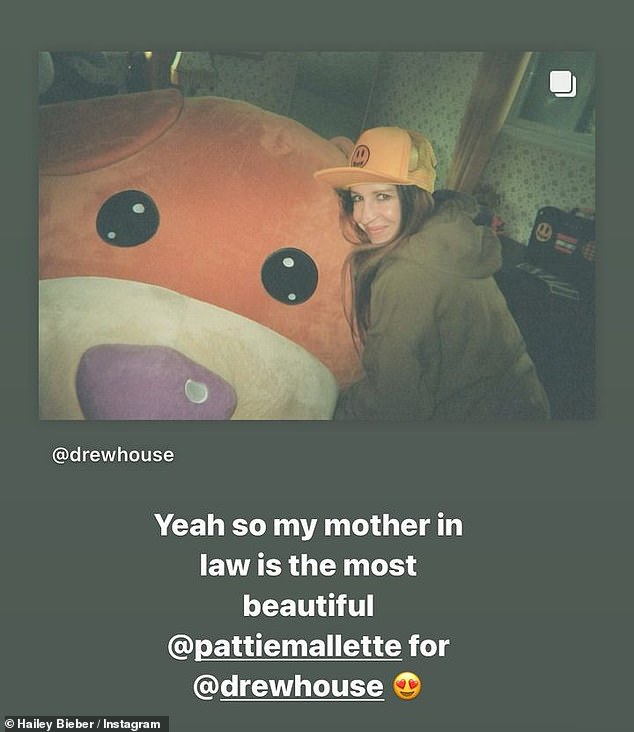 High praise: Hailey Bieber also complimented her mother-in-law, calling her ‘the most beautiful’ in an Instagram post on Thursday

Mallette can be seen just behind him, sitting in the back seat, looking pretty much how she does today, only the photo appears to have been taken at least 15 year ago.

Agreeing with her husband’s view about his mother’s aging process, Hailey Bieber would also post a photo of her mother-in-law offering an infectious smile at the camera while wearing a Drew baseball cap.

‘Yeah so my mother in law is the most beautiful @pattimallette for @drewhouse,’ she gushed in the caption. 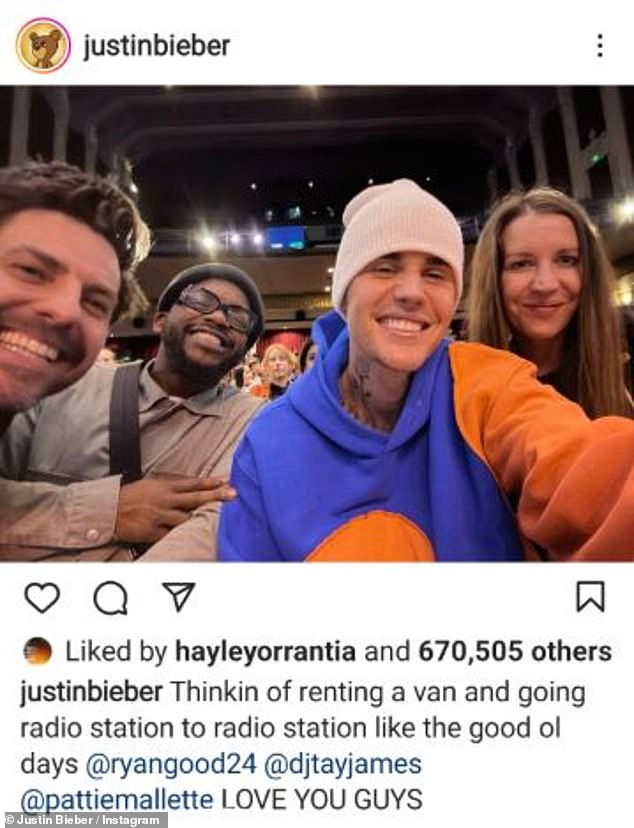 Mallette can also be seen in another photo that her son shared on Instagram on Thursday. It shows her attending a service at Churchome church in Beverly Hills with Drew House creative director Ryan Good, DJ Tay James and Justin.

‘Thinkin of renting a van and going radio station to radio station like the good ol days @ryangood24 @djtayjames @pattiemallette LOVE YOU GUYS,’ he wrote in the caption.

Over recent days, the mother and son duo has been spotted out together, which includes going to church on more than one occasion. 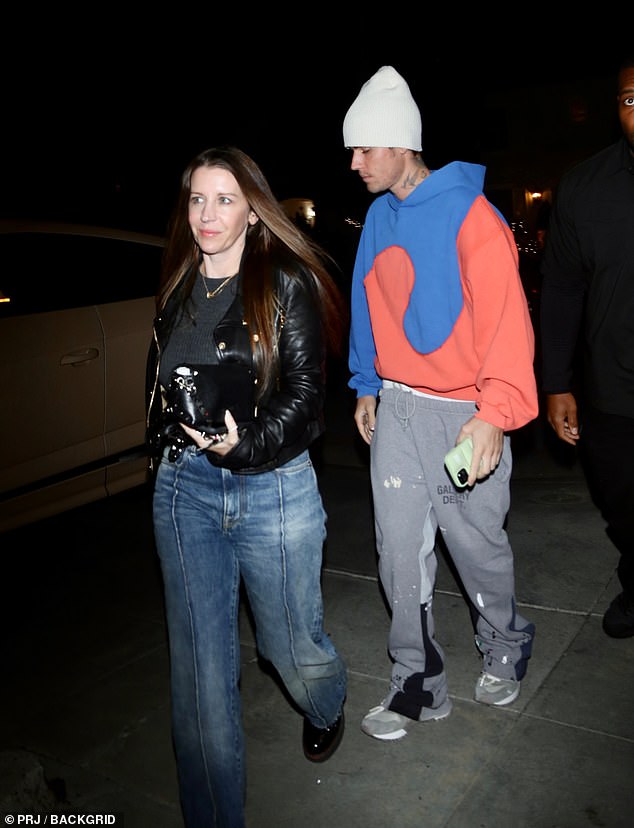 Getting spiritual together: Over the recent days, the mother and son duo has been spotted going to church together on more than one occasion