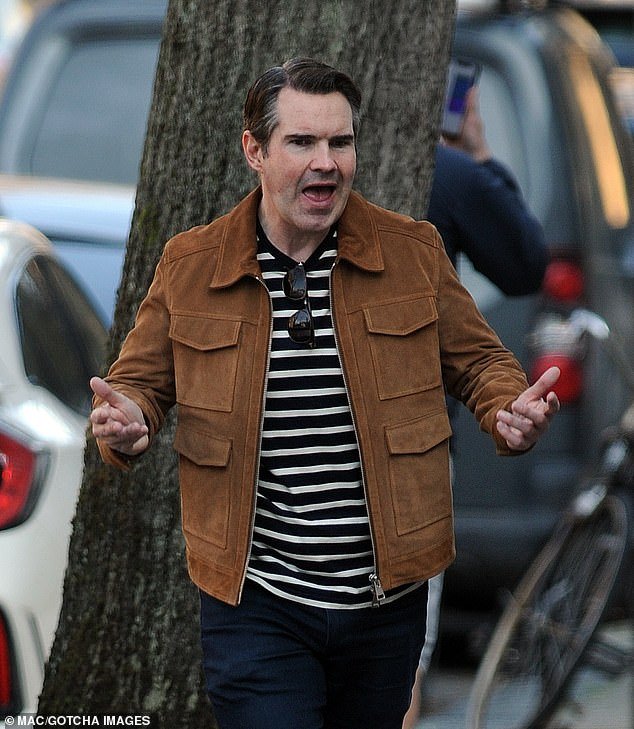 He surprised fans after revealing he’d had a hair transplant last summer, before later  announcing he’d had ‘a little bit of Botox’ and new teeth.

And Jimmy Carr, 48, appeared to be in great spirits as he regaled his friend with chat while on a walk in London on Saturday.

The comedian sported a very smooth visage as he threw his arms up in conversation during the walk and donned a striped tee layered under a caramel suede jacket. 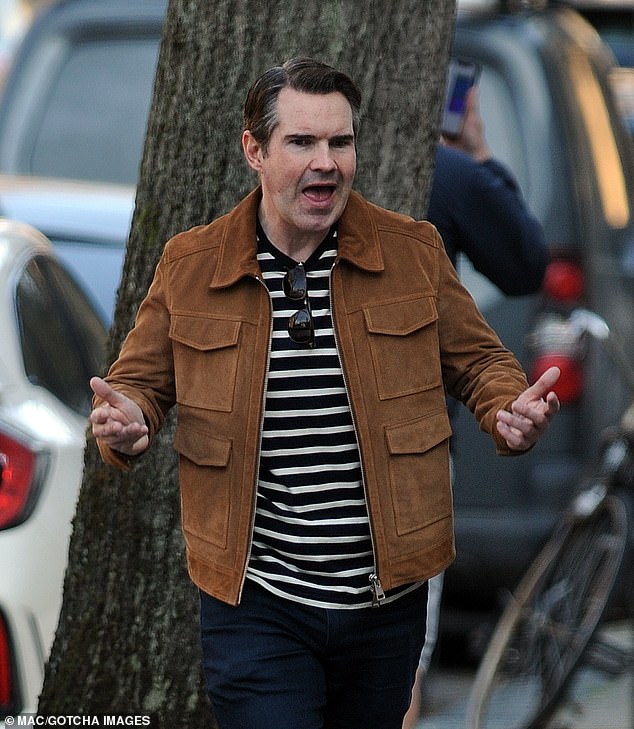 Smooth: Jimmy Carr, 48, appeared to be in great spirits as he walked and talked with a pal in London on Saturday following his radical hair transplant and Botox makeover

A pair of blue jeans completed the rare casual look for the often suited-up presenter, who accessorised with a pair of navy trainers and aviator sunglasses attached to his collar.

Jimmy styled his locks in a signature side part, revealing a hint of grey at the roots.

The 8 Out of 10 Cats presenter was accompanied by a bearded friend, who wore a grey tee, dark jeans and slung a jacket over his shoulder on the sunny afternoon.

Jimmy seems to be taking ageing in his stride and embracing his greying locks, though last year opted for a hair transplant to keep his famous coif intact. 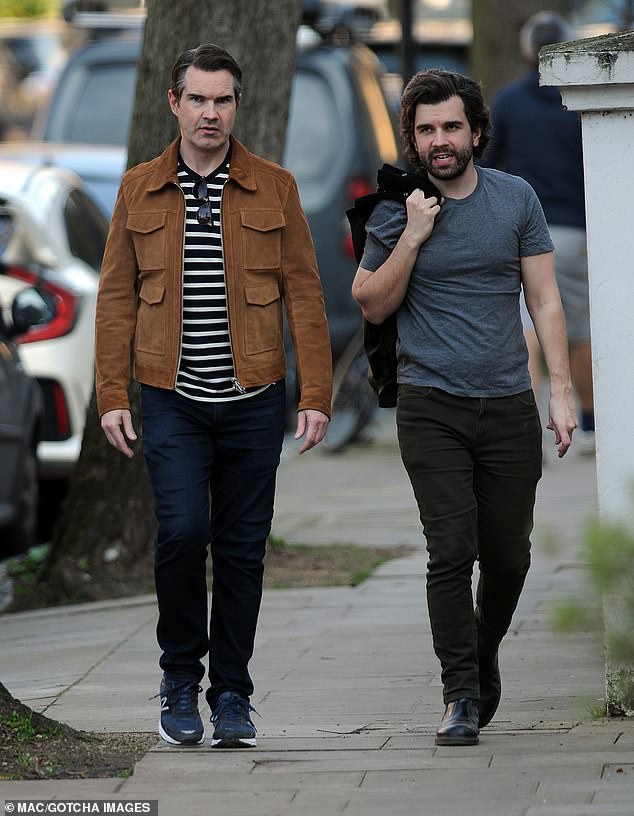 Sunny day: The often suited-up comedian sported a black and white striped tee layered under a caramel suede-look jacket with four oversized pockets, which he paired with blue jeans

Grilled by Maya Jama on Peter Crouch’s Save our Summer in June, he joked that his hair had ‘socially distanced from his forehead’ – and that he looked like a ‘snooker-playing vampire’.

Explaining the procedure, he said: ‘I shaved my head and what they do is take hairs from the back of your head and they put them on the front.

‘Basically I had enough hair, it was just in the wrong place. It was a bit of redistribution.’

The funny man then admitted in October that he’s had ‘a bit of work done’ during lockdown to look younger, including ‘a bit of Botox’ and getting a new set of teeth. 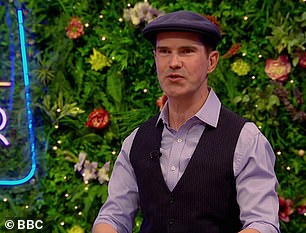 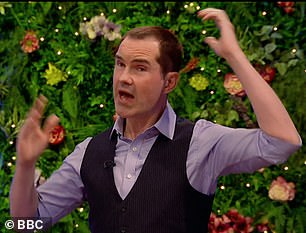 Hair today, more tomorrow: Jimmy elected to get a hair transplant last year to replenish his famous coif, and joked with Peter Crouch’s Save our Summer presenter Maya Jama in June that his hair had ‘socially distanced from his forehead’

Jimmy has been incredibly open about his decision to splash out on the procedures to improve his appearance as he approaches his 50th birthday, joking: ‘What else are you going to do in lockdown?’

Speaking on the Just For Laughs, Jimmy said: ‘I’ve had a lot of work done. I got my teeth knocked out and put back in.

‘And then I had a hair transplant in the lockdown, which I didn’t particularly need, but what else are you going to do in lockdown?’

Discussing his decision to undergo Botox, he said: ‘I was seeing a guy, getting a bit of Botox, and I was chatting to him and he said, ”Oh I do Simon Cowell”, and I went, ”Yeah I think I better leave”. ”What have you done… he looks like a melted candle”.’

Britons have long thought of the Cambridge graduate as one of the Britons’s top comedy draws. 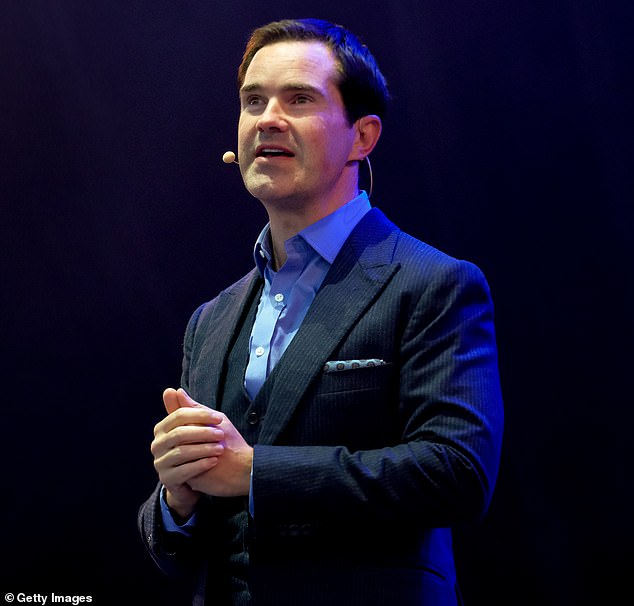 Got some work done? The comedian admitted he’s had ‘a bit of work done’ during lockdown to look younger, including a trip to the dentist’s for a new set of teeth (pictured in August 2020)

But earlier this month, a study showed the dapper TV personality was in fact the country’s funniest man.

A study of 120 volunteers found participants laughed out loud for a total of four minutes and 46 seconds while watching an hour of Jimmy’s stand-up show.

Jimmy, who was working in marketing at Shell during the 1990s, left his old career behind to become a comedian in 2000.

He steadily made a name for himself, hosting for the Comedy Central before getting his big break on 8 out of 10 Cats. He also hosts the series’ spinoff, 8 Out of 10 Cats Does Countdown, alongside word expert Susie Dent and math whiz Rachel Riley. 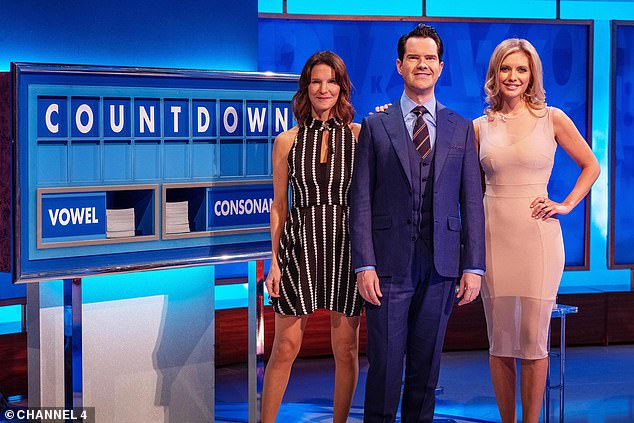 Quiz whiz: The panel show regular left a marketing job in 2000 and quickly worked his way up the stand-up and presenting ranks, eventually landing hosting duties on 8 out of 10 Cats and its Countdown spinoff with Susie Dent and Rachel Riley