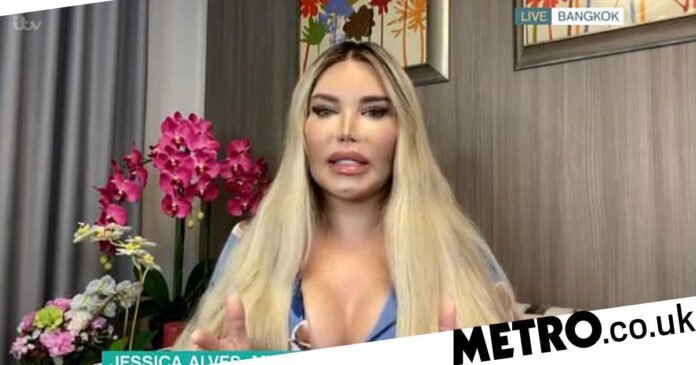 Jessica Alves has undergone gender reassignment surgery in Bangkok and has revealed she’ll have a fully-functioning vagina in three months time.

The reality star, 37, who previously appeared on Celebrity Big Brother, is famous for having over 76 cosmetic surgeries and came out as transgender in January 2020.

Since then, Jessica has revealed her new name, after insisting she’s ‘always felt more like Barbie’, and she is now recovering in Bangkok after travelling to Thailand for gender reassignment surgery.

Appearing on This Morning on Monday, Jessica – who was formerly nicknamed the Human Ken Doll – said it ‘feels amazing to be a woman’ as she discussed her op and explained that the surgery will leave her with a vagina that behaves in the same way a biological one would.

Explaining the procedure, Jessica told hosts Phillip Schofield and Holly Willoughby: ‘Sex reassignment surgery uses a layer of skin under the ab which is very similar to the biological vagina.

‘The aesthetics are exactly the same. In three months time, it’s going to behave the same way as a biological vagina – it self-lubricates.’

Thrilled with the results, Jessica said she ‘can’t stop looking’ at her vagina and claimed that only three doctors in the world perform the surgery, so she feels so ‘happy and grateful’ to finally be starting a ‘new life’.

Discussing why gender reassignment was so important to her, Jessica said: ‘I was never happy, I kept having plastic surgeries to find myself. In reality, I was a transgender woman, but I couldn’t transition. I was afraid to at the start.’

Jessica explained she was locked in television contracts as her former self Rodrigo Alves, so she was forced to delay her transition and was later diagnosed with gender dysphoria.

She began her transition in September 2019 and had hormone injections to stop her growing body hair and to give her hips and breasts. As well as breast implants, Jessica had face feminisation surgery.

She had her Adam’s apple removed, her jawline shaved and her chin shaved and modified.

Asked whether she was done with cosmetic surgery now her gender reassignment is complete, Jessica revealed her plans for two more ops – telling Holly she’d like to improve her boobs and bum so she can enjoy days at the beach.

‘I have to do two more surgeries, I’m not happy with my breasts,’ she said, as she explained she need to ‘change her implants’ and hopes to make her bum perkier.

On whether she is now looking to date, Jessica said: ‘I have been so busy mentally preparing myself for this surgery, this is a new beginning, a new life… I’m open to suggestions and opportunities.’

This Morning airs weekdays from 10am on ITV.

If you’ve got a celebrity story, video or pictures get in touch with the Metro.co.uk entertainment team by emailing us celebtips@metro.co.uk, calling 020 3615 2145 or by visiting our Submit Stuff page – we’d love to hear from you.


MORE : Holly Willoughby tears up at ‘so scary’ clip of new parents waiting to hear their baby cry in hospital