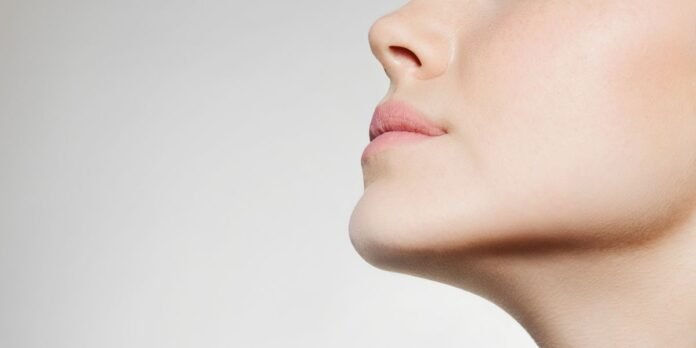 In the summer of 1993, I was 13 years old. I was rail thin, had a flat chest and acne. In my mind, I had enough to deal with. Then came a new complex via an unsolicited assessment from my older sister’s friend at the dinner table one night: “You both have extra skin under your chin. It’s not, like, tight,” she told us. My sister and I locked eyes, knowing what she said was true. We were skinny teenagers, and we each had a visible double chin.

Nearly 30 years later, this “friend” is out of the picture, but her remark has stuck with me, just like that little pocket under my chin. I still fixate over it. So does my sister. Our issue is genetic; no amount of weight loss or gain would change a thing. Over the years, I developed a habit of staring at myself in the mirror and pulling back the extra skin behind the corners of my jaw. It never struck me as a real problem until, inundated with photos of celebrities, models, and generally photogenic folks, I realized the one thing they all had in common was a razor-sharp jawline.

This has become the year of the snatched jawline

I’m not the only one obsessing over this area. “This has become the year of the snatched jawline,” says my dermatologist, Shereene Idriss, who recently opened her own practice, Idriss Dermatology, in New York City. She says seven out of 10 patients ask about defining their jaw, chalking up the drastic uptick in the demand for lower-face procedures partly to the pandemic. All that face time with one’s self has woken up the masses to the fact that “the jawline is the structural pole holding up a face,” says Idriss. “A strong angle can be seen as a sign of someone aging ‘well.’ ” If you think about the world’s most photogenic faces, they all have a jawline that sits somewhere between 120 and 130 degrees. Their jawlines are lifted; their skin, taut.

I went to Idriss because I liked her real-talk, less-is-more approach. At my last visit, she described my jaw as “delicate” and getting only daintier, meaning that as I lose bone mass and volume as I age, my jaw will recede into my neck. Her recommendation? A combination platter of Botox to firm the neck bands, an ultrasound tightening treatment (Ultherapy), and hyaluronic- acid fillers to lift my jaw. Ultherapy has no downtime but can be painful for up to a week. It takes six months to see the full effect, which lasts up to 24 months. There are more aggressive options, of course, like dissolvable threads that literally “lift” the neck and chin. They last for 18 months. And then there’s the full-throttle neck lift. For that, I’d need a plastic surgeon.

When Marc Jacobs decided to get face and neck lifts in late July, he did so loudly and proudly, chronicling the process, including his post-op and recovery, on Instagram. He even added the cheeky hashtags #heckofaneck and #snatchedtightalright. The 58-year-old designer also publicly thanked his doctor, Andrew Jacono of the New York Center for Facial Plastic Surgery, who is responsible for Real Housewife Sonja Morgan’s lift as well. (She was 57.) He seemed like the guy to talk to.

The idea of staving off procedures until you’re 50 is quickly becoming as antiquated as rock-hard silicone breast implants.

Jacono tells me that a third of his patients who want “what they like to call a ‘snatched neck’ ” are 40-somethings. He also explained why people opt to go under the knife. He says liposuction can take some of the fullness out, “but then you’ll have additional blousy skin underneath that with time can get crinkly.” Blousy? Crinkly? His words conjure an image of the clearance rack of Calypso in the early aughts. If I want maximum results, he says, I should consider a proper neck lift to tighten the underlying muscles and remove excess skin, which with Jacono costs $50,000. He tells me I should wait a few years before thinking about such a procedure.

As for the lipo, threads, and other non- to minimally invasive derm procedures, he says those yield 25 to 30 percent improvement. He adds a few more facts of life: Youth has the advantage when it comes to cosmetic surgery because younger skin and tissue heal better and have more resiliency. The idea of staving off procedures until you’re 50 is quickly becoming as antiquated as rock-hard silicone breast implants.

I don’t have a spare $50,000, but if I did, I’d be on Jacono’s wait list. I know how that sounds. When I tell friends I want this done, they say, “You’re crazy.” But those who know, know. My sister and I have talked about it. I imagine Zac Efron would be sympathetic; internet rumors abounded when he appeared in a Facebook Watch video with an extra-chiseled-looking jawline back in April. So I continue to see Idriss, and I get fillers and lasers. Surgery—I’m thinking about it. Until then, it’s chin up.