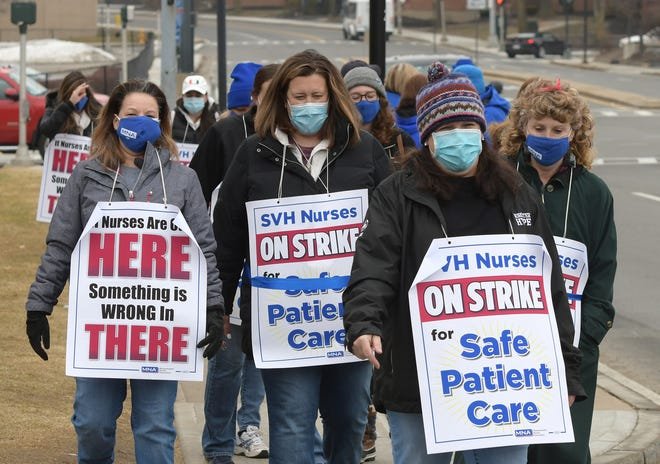 WORCESTER — A city man said he requires plastic surgery after being attacked by a fellow patient Saturday morning at St. Vincent Hospital, and he blamed short staffing for the alleged incident.

“They were so short staffed that it didn’t help the situation,” Matthew Vigeant, 46, said in an interview this week. “If anything, it made it worse.”

“Our security team responded in less than two minutes to this isolated incident, which was an altercation that occurred between two patients,” Sherwood said. “Any attempt to twist this into anything more by the (Massachusetts Nurses Association, the union that represents striking nurses at the hospital) leadership, who is now desperate to demonstrate any problems in this hospital, since their systematic objections have been proven false with data, is irresponsible.”

Sherwood also insisted that “staffing on the unit was more than adequate, just like it always is, and we have demonstrated through multiple studies.”

“The (state) Department of Mental Health has been reviewing staffing on this unit since the beginning of the strike, and has found it to be sufficient,” Sherwood continued. “In fact, they have shared in calls with hospital leadership that they are very pleased with the quality of the temporary replacement behavioral health nurses and their work.”

Vigeant said he arrived at the hospital Wednesday evening and he was admitted on Thursday for treatment for depression. He said he was unaware of the nurses’ strike, but that the atmosphere was “like night and day” compared with previous visits to the hospital and that it was “like a complete horror show there.”

“I go to St. V’s and know a lot of the people there,” Vigeant said. “The people there are really good people and generally give you good care and care about you, but experiencing what I experienced and what I went through seems like a shock and awe effect.”

Vigeant said he was talking with his son on FaceTime early Saturday morning when another patient, a stranger, began pressing his face against the window of the consult room and then opened the door to try and come in.

“It was very weird,” Vigeant said.

Vigeant said he finished the conversation with his son and went into the hall where the other patient threatened him.

“What he wanted was, I had my phone and he wanted to listen to music on it,” Vigeant said. “Before you knew it, we were in a tussle, and there wasn’t much staff around, and I ended up sustaining an injury.”

Vigeant said he had neck pain and a “severe laceration” to his lip. He said a surgeon at St. Vincent referred him to a plastic surgeon at another hospital.

“It was torn wide open, it needs to be repaired by a plastic surgeon,” Vigeant said, relaying plans to go to Brigham and Women’s Hospital in Boston to meet with such a specialist the following day.

He said that security came in response to the alleged incident, but a report was not filed.

He said he did, however, file a complaint with the hospital during his stay. A nurse allegedly confronted him after Vigeant complained that the nurse had tried to give him the incorrect medication.

Vigeant said the care was not up to the standards he had previously experienced at St. Vincent and attributed it to the nurses’ strike. Asked if he supported the strike, Vigeant said he had no opinion either way about it, not knowing the issues. But he did feel that the hospital he experienced Saturday was short staffed.

“I hope they do staff the hospital appropriately. I hope things do go back to the way they were with the nurses that were there previously and the level of care returns,” Vigeant said. “That’s my hope, not just for me but for others.”

He also said that he contacted a lawyer.

Boston lawyer Thomas Flaws said the incident is “something we’re looking into.”

“People go to facilities with the expectation they are going to be safe; if we believe they are not safe, I think that warrants looking into,” Flaws said in an interview Thursday.

“Hospitals are staffed with a lot of nurses for a reason. Part of that is patient safety, and when there are not nurses there, that is a concern.”

“Quality of care and patient safety is always a top priority at St. Vincent Hospital,” Sherwood said. “The staffing guidelines we have in place provide coverage that is well within industry standards, and are comparable to major Boston-area hospitals that also have outstanding reputations for quality and safety.”