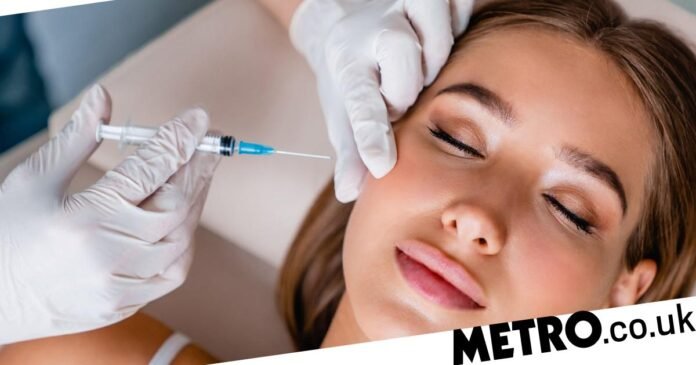 Anyone offering botox or fillers could soon require a license under new plans to protect people from botched cosmetic procedures.

Sajid Javid has outlined his commitment to making it an offence to perform non-surgical procedures without a licence, saying ‘far too many people have been left emotionally and physically scarred when things have gone wrong.’

The Department of Health said an amendment to the Health and Care Bill, due to be tabled on Tuesday, would give the health secretary the power to introduce a licensing regime for the procedures.

The scheme would aim to bring in consistent standards that people carrying out non-surgical cosmetic procedures will be required to meet, the department said.

It would also set out hygiene and safety standards for premises.

The department said the ‘scope and details’ of the regulations will be decided by ‘extensive engagement’ which will include asking the public what they think.

Botox injections are often used to reduce the appearance of wrinkles on the face while lip fillers are used by people who want to give their lips a fuller look.

Both have become increasingly popular in recent years but as their popularity has grown so to have reports of procedures going wrong, sometimes with devastating consequences.

Mr Javid said while ‘most of those in the aesthetics industry’ followed good practice when it comes to patient safety, ‘far too many’ had suffered as a result of ‘botched’ procedures.

‘I am committed to protecting patient safety by making it an offence for someone to perform these cosmetic procedures without a licence,’ he said.

‘We’re doing all we can to protect patients from potential harm, but I urge anyone considering a cosmetic procedure to take the time to think about the impact on both their physical and mental health and ensure they are using a reputable, safe and qualified practitioner.’

Maria Caulfield, the minister for patient safet,y blamed social media for a rise in demand for botox and fillers.

She said as a result there had been an increase in people suffering the consequences of badly-performed procedures.

‘While these can be administered safely, we are seeing an unacceptable rise in people being left physically and mentally scarred from poorly performed procedures,’ Ms Caulfied said.

‘Today’s amendment is the next step on the road to effective regulation of non-surgical cosmetic procedures in England.’

The move comes after the Botulinum Toxin and Cosmetic Fillers (Children) Act, which came into force in October, made it illegal to give botox or fillers to under-18s.

The legislation also made it illegal to book under-18s an appointment and cracked down on adverts – including social media, influencer advertising and traditional advertising – for cosmetic procedures targetting people in that age group.

Details on the public consultation on non-surgical cosmetic procedures are expected to be set out at a later date.

For more stories like this, check our news page.

Get your need-to-know
latest news, feel-good stories, analysis and more