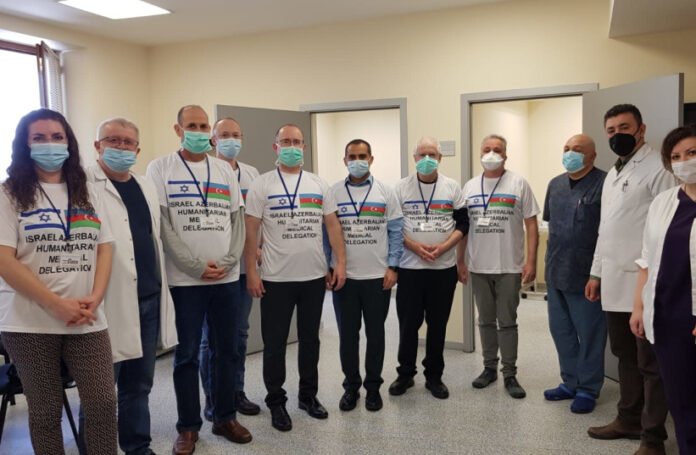 The Nagorno-Karabakh conflict between Armenia and Azerbaijan might be over for now, but the scars of the war are still evident on many of the soldiers who participated in the battles. For 150 Azeri soldiers, some of these scars have begun to heal, thanks to a special humanitarian delegation of Israeli medical workers.
With funding provided by Azeri charitable foundation YAŞAT, the delegation was brought to Baku on a private plane, due to the closing of Ben-Gurion Airport.

The doctors primarily operated in the field of oculoplasty (plastic surgery for the eyes) and carried out procedures such as eye socket restoration, eyelid surgery, prosthetic eyes and more.

“The young soldiers we met sustained terrible injuries – most were unable to leave the house due to facial deformities,” said Dr. Yishay Falick, CEO of Jerusalem’s Misgav Ladach Hospital, who led the delegation.

The delegation said it worked tirelessly to help restore sight to the wounded soldiers – or at least return to a normal routine when restoring sight was impossible.

One soldier had to undergo several hours of surgery to restore his sight after his eyes were badly damaged by an exploding shell. Another soldier had to receive retinal repair surgery and an artificial corneal transplant, with the eye surface needing to be  with stem cells and a placental membrane after the eye was burnt by an explosion.

“To give someone the opportunity to see the world again is an extraordinary feeling,” said Falick.

“I am proud to be part of an Israeli medical system capable of running humanitarian missions – even during a most complex period,” he said. “I’m proud of all the members of the delegation who came here to help these young people with serious injuries to recover. This is a very beautiful expression of the Israeli volunteer spirit.”