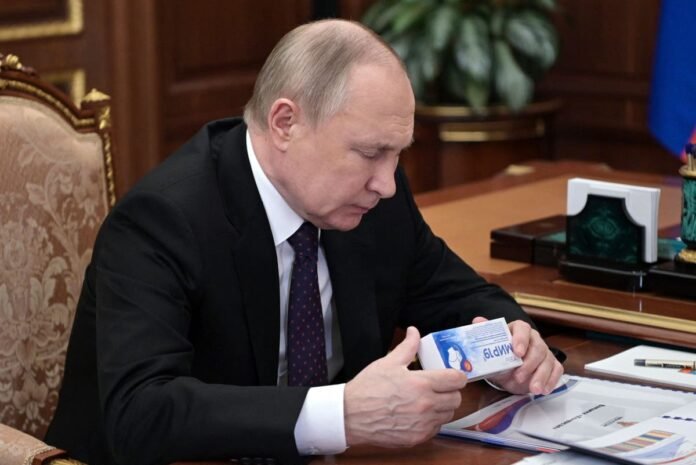 The famously frowning Vladimir Putin may find himself cut off from a supply of Botox because of sanctions imposed on Russia by global drug companies.

In announcements that have been largely covered only by the business media,  a series of drug makers including Eli Lilly and Co, Novartis and Abbvie Inc are scaling back their operations in Russia as part of the sanctioning of the country for its invasion of Ukraine.

Eli Lilly and Co, for instance, said it would continue to supply critical medicines for the treatment of  cancer and diabetes, but will halt “non-essential” products, Reuters said this week.

AbbVie, which owns the celebrated wrinkle treatment Botox, said it has temporarily suspended operations for all its aesthetics products in the country.

Who in Russia might be affected particularly by that latest development? Perhaps Vladimir Putin himself, the man whose decision to invade Ukraine last month triggered an unprecedented array of sanctions from many Western nations.

As The Daily Beast reminded its readers, the 69-year-old Russian leader has long been reported to be a user of Botox and he may be about to be cut off from his supply.

A decade ago, a piece in The Guardian covered the rumours circulating on social media about the Russian leader’s use of the product.

Ironically, it said those rumours started after a visit to Kyiv in October 2011 when he was serving as Russia’s prime minister, “when he showed up to a meeting sporting a massive blue-and-yellow bruise around his eye”, and bloggers across Russia decided it had to be the result of Botox injections.

Such was the clamour, Mr Putin’s spokesman was forced to issue denials. “It’s probably just how the light fell. The prime minister is tired,” he said.

It added that Russia’s New Times magazine had covered the subject earlier in the year with an article headlined “What has happened with Putin’s face?”

It said that four plastic surgeons the magazine interviewed claimed the Russian leader had probably had cosmetic surgery and it was likely that he had undergone Botox injections in his forehead.

There was no immediate response to questions from The Independent from Russia’s UN mission in New York, its embassy in Washington DC, or its foreign ministry in Moscow.

Abbvie Inc, which is based in Illinois, also did not immediately respond to questions as to whether its suspension of sales in Russia was intended to specifically impact Mr Putin.

In a statement on its website the company said: “Our thoughts are with the people of Ukraine and those affected across the region. As a global biopharmaceutical company, we have a responsibility to patients who depend on our medicines.

“We are committed to ensuring our patients in Ukraine, Russia, and throughout the region continue to have access to our essential and life-saving medicines.”

It added: “As the tragic events continue to unfold in Ukraine, AbbVie has temporarily suspended operations for all our aesthetics products in Russia.”