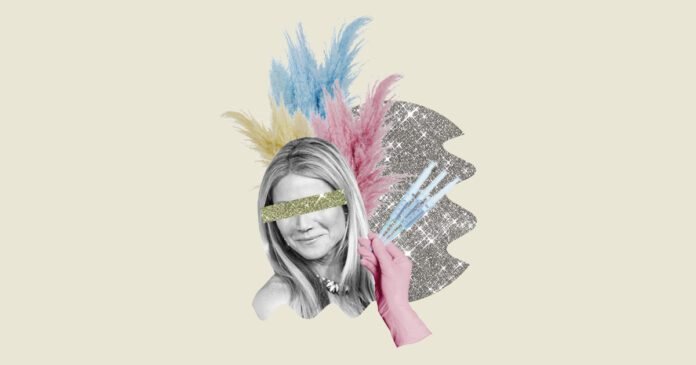 This past September, Gwyneth Paltrow did something that probably surprised a lot of people. No, she didn’t launch another candle purported to smell like one of her body parts. Rather, she took to Instagram to announce her new role as the face of a product: an anti-wrinkle injection called Xeomin.

The move seemed to come out of left field, partly because celebs are notoriously tight-lipped when it comes to cosmetic enhancements. Cue the “my biggest beauty secret is drinking tons of water” trope. Paltrow openly discussing getting work done was refreshing.

But perhaps more confounding was the fact that the queen of “clean” herself was promoting an actual (gasp!) toxin. Indeed, like its competitors (Botox being the most well known), Xeomin relies on botulinum toxin type A to smooth out frown lines and crow’s feet. But unlike its competitors, Xeomin is touted as being “uniquely purified” and devoid of “any unnecessary proteins.”

“I wasn’t a fan of anti-wrinkle injections for frown lines. Then I found one that’s different,” Paltrow is quoted as saying. So is it true: Is there really such a thing as “cleaner” Botox?

First, it’s important to define what we’re talking about here. “Botox will always be the Kleenex of our industry,” says facial plastic surgeon Dr. Mike Roskies, MD, of how the brand name is often used by consumers as a catch-all term to refer to anti-wrinkle injections known as neuromodulators. Botox was the first to market, but there are other options: Xeomin, Dysport and Nuceiva (known as Juveau in the U.S.) are all purified forms of botulinum toxin type A approved for cosmetic use in Canada.

When injected, the toxin blocks signals from nerves to muscles so they don’t contract, which prevents wrinkles from forming. It’s only a temporary solution: The effects last about three to four months, before the product is broken down by the body and processed, like all waste, through the kidneys and liver.

“People will hear from friends or in the media that there is a cleaner, better-for-you Botox derivative out there. The question becomes, what does better mean?”

Roskies,who is the medical director at Yorkville’s SpaMedica, says patients often come in asking for the cleanest Botox they have. “People will hear from friends or in the media that there is a cleaner, better-for-you Botox derivative out there,” he says. “The question becomes, what does better mean?”

It’s a good question. Even Gwyneth’s sponsored post states that “Studies have not been performed to determine whether the presence or absence of unnecessary/complexing proteins has a long-term effect on safety or efficacy.”

“Better, in my scientific approach, means that your chance of building up resistance to the protein is less, among other factors like stability,” says Roskies. For those of us without medical degrees, he offers this analogy: Think of neuromodulators like M&Ms. The ones approved for cosmetic injection all use the same active ingredient, botulinum toxin type A, but differ in their protein coating, i.e. the colour of their outer shell.

So if Botox was the red M&M and Dysport was the green M&M, Xeomin would be the brown one without any coating on it. People sometimes refer to it as “naked” or “pure” because it doesn’t have additional proteins, which are added to help stabilize the toxin. (Is anyone else reminded of that scene in The Wedding Planner when Matthew McConaughey tells Jennifer Lopez he only eats the brown M&Ms because he figures they have less artificial colouring?)

The reason this might be important, says dermatologist Dr. Allison Sutton of West Dermatalogy in Vancouver, is that when you’re exposed to a protein like botulinum toxin type A, there is the potential to develop neutralizing antibodies. And if you do, it’s possible the treatment would no longer work.

The two biggest factors in determining whether you may become resistant are dose and frequency. “Generally it happens in patients who have had repeated injections of higher doses over many years, but can even happen after a second treatment in rare (but reported) instances,” says Roskies.

Sutton says it’s more likely, but still uncommon, to happen when receiving medical treatments that require high doses of neuromodulators at a time, like when treating spastic muscles.

If you’re thinking of using neuromodulators longterm—say, decades, which would be the case of someone who starts injecting in their twenties—it’s something to keep in mind. Roskies says he sees patients who have been receiving neuromodulators for upwards of two decades notice that the treatments no longer last as long and require larger doses. “It’s not the toxin itself, but rather that protein coating that people are developing a resistance to,” he explains.

“It’s not the toxin itself, but rather that protein coating that people are developing a resistance to”

“We’re using neuromodulators for pre-juvenation treatments now, using low doses over time for prevention, on younger patients,” adds Sutton. “We want to make sure that they’re going to be able to continue to use these treatments for aesthetic indications over time.”

The good news is if you don’t like the results from one product, or if it no longer works for you, you can always switch it up. “If you use Botox in March, when you book your next treatment in July, we can switch to Dysport,” says Amanda Mizen, the owner of North Medical Spa in Toronto, who cautions against injecting two different products during one treatment.

There are other differences between neuromodulator brands—for example, some take effect faster than others, some may be more effective in certain areas of the face—and personal considerations like allergies to take into account when deciding on the product that’s right for you. That’s why you should always discuss it with a medical professional.

“Ultimately, everybody asks me the same question: Which product is best?” says Roskies. “The answer is it’s not necessarily the product and the needle, it’s the hand that’s holding it. If your provider is more comfortable with one product and they understand how it works and they know what you expect, then that’s going to be the best product for you.”