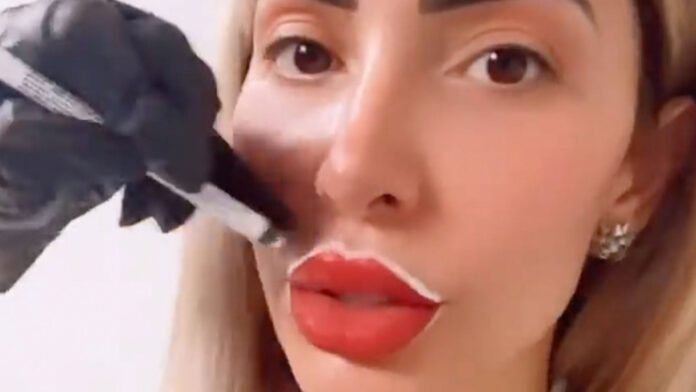 FARRAH Abraham may have spent thousands on countless rounds of drastic plastic surgery that she’s tried to keep under wraps, a top surgeon has said.

Speaking to The U.S. Sun, New York facial plastic surgeon Dr. Richard Westreich also claims the reality star looks like she has been injected with so much filler that her face is bulging from a build-up of excess water.

Looking at photos of what Farrah’s face looks like now compared to during her early days on MTV, says he believes she may have had more work done than she’s let on.

“She could have spent more than $85,000 on the nose jobs, silicone cheek implants, the chin implant removal, a lip lift, butt injections, and large amounts filler,” he says.

After the 31-year-old shared a new video of herself on social media this weekend, fans said she looked “barely recognizable” and begged her to stop getting procedures.

Dr. Westreich says too much filler, in particular, can distort a face. 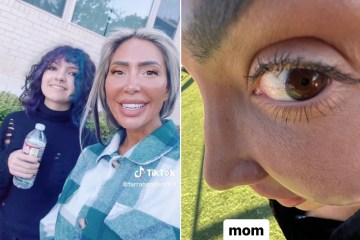 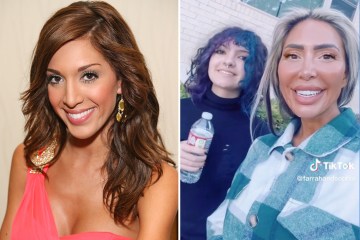 “If you have had too much filler, it just stays in there perpetually and after three rounds or so, the water issue gets worse and worse over time.

“If you keep adding new filler, it accumulates more and more water, and so her face is so filled with water it looks really blown up.

“The only way out of this is to start all over again and dissolve everything — which most people don’t want to do since the dissolving, after further different injections, takes a couple of weeks for all the material to wash out.”

Farrah has supposedly been relatively open about the cosmetic procedures she’s had over the years, even having her daughter, Sophia, film her getting butt injections and recently posting an unedited photo of her swollen face.

Farrah herself has often shared photos and videos of her cosmetic surgery journey online and has been fairly vocal about this as well.

She wrote about her chin implant in her book, Dream Twenties: Self Guided Self Help Memoir.

“There will be those insecure times with plastic surgery, where it’s not like the amazing boob job that just changes your world where life is going to stay sunny and pour money all over you, no I’m talking about when I got a chin implant,” she wrote.

Then in 2011, she told US Weekly: “After having a baby, my boobs went away. It hurt my self-esteem … I didn’t feel like I was woman enough anymore. I knew I could be happier.”

And in 2015, Farrah also appeared on an episode of Botched after getting permanent lip fillers, when she said: “Girlfriends don’t say I didn’t warn ya!” and shared a photo of her new bulging lip.

While her latest selfie may have shocked many of her three million Instagram followers, this actually might be just the tip of the iceberg.

“I’m looking at her original photos and can see with the recent ones, obviously the lips and cheeks are the most startling,” adds Dr Westreich, who has over 18 years of experience.

“She’s definitely had her nose done as we know, but I do think there’s a massive amount of filler in there, she’s had micro-blading on her eyebrows and it looks like she has veneers too.

“Surgically, I don’t see much around her eyes, but it looks possible that she has had cheek implants, which are solid silicone and would have been put in through her mouth.

“It’s hard to get that much volume in her cheeks just with filler.

“The lips are filler, but not implants, but the cheeks are too structured, so yes, she would likely have also got cheek implants.

“It’s too hard with just filler to get that type of lift and turn up so there might have also been a lip lift and there is a shadow.

“The upper and lower lip areas are supposed to be at a 40/60 ratio, but she now is 50/50, which is more of an LA West coast look and is not really normal.

“If her goal is to look like the filter ‘without’ the filter, then the issue also is that the filter has become the norm of what look she wants to achieve.”

“I feel like she was a beautiful woman before and a lot of times, this is how people feel, but obviously she wanted to look different,” says Dr. Westreich.