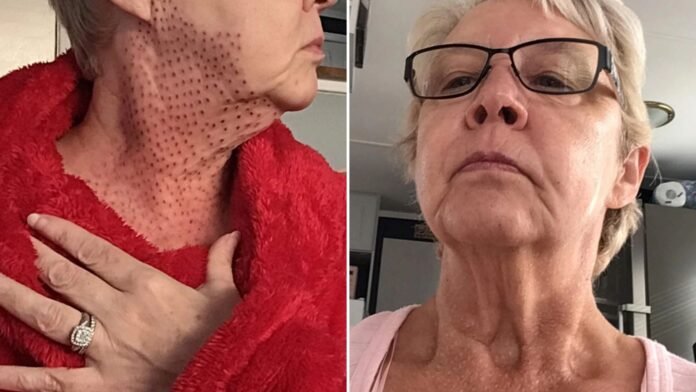 WHEN Jayne Bowman wanted to banish her double chin after losing weight, she was thrilled to discover it could be as simple as a quick procedure.

And the fact that Jayne, 59, wouldn’t even have to go under the knife only further convinced her that the non-surgical procedure was the way to go.

But now Jayne, from Hampshire, who doesn’t work because of illness, is warning about the very same treatment after she was left a “recluse” with a neck which looks like an “old chicken”.

She paid £500 for a fibroblast plasma treatment to tighten the skin but was left with hundreds of huge unsightly red scars.

Jayne says: “I wish I still had my saggy neck – it was better than what I have been left with. This botched beauty treatment has left me in agony.”

Jayne found her therapist on social media and was drawn in by her glowing reviews. 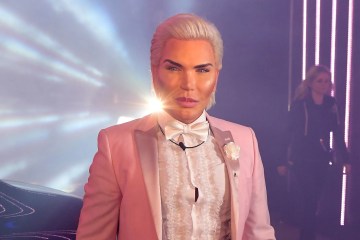 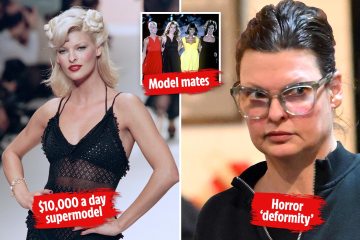 “It was so painful – it burned like hell,” she says. “I told the therapist I was in agony but she didn’t seem bothered. She said she had to carry on or it wouldn’t work.”

Later Jayne slathered cream over her neck to ease the burning, but her chest, neck and face became covered in unsightly brown dots.

She immediately contacted her therapist and was offered ‘light therapy’ and ‘microneedling’ – but nothing worked to get rid of the scars.

Furious, Jayne demanded the therapist’s insurance details. She was fobbed off for months and told: “I’m sorry I can’t remember them”.

Some 79 per cent of practitioners reported to Save Face in 2020 were believed to be uninsured – as it’s not a legal requirement.

“I don’t want to go out anymore,” Jayne says. “I’m a recluse because I don’t want people to see my horrible scars. They look so ugly. I am so angry.”

Some 79% of practitioners reported to Save Face in 2020 were believed to be uninsured – as it’s not a legal requirement.

“I don’t want to go out anymore,” Jayne says. “I’m a recluse because I don’t want people to see my horrible scars. They look so ugly.

“I am so angry. This has affected my life in so many ways. I just wish I had left my double chin alone.”

Non-surgical procedures have exploded in popularity in Britain in recent years – with promises of “lunch break nose jobs” and “no downtime tummy tucks” luring people in.

But with many unregistered beauticians (or those with ‘shoddy’ qualifications) performing laser, fillers and Botox, complaints like Rachel’s are sadly not rare.

A much-needed new law will make it illegal to inject fillers and Botox without a licence, but experts argue the government need to enforce existing legislation first.

Ashton Collins, director of Save Face, who help people lodge complaints and have a government-approved register of clinicians, says: “The existing regulatory framework is flawed and is not enforced.

“There are laws in place currently that ought to safeguard the public from being injected with unlicensed medicines or given Botox injections without a valid prescription, but both issues are rampant and not enough is being done by the regulators to stop it.

“When it comes to training and insurance, we’ve investigated a lot of people who just lie, mocking up certificates on their computers, then hanging them on the wall.

“The public have no means of proving whether they’re genuine or bogus. You can be as cautious as you want, but you are at risk. So my advice would be to use the Save Face register to find a safe treatment.”

Over the past six years, Save Face has received nearly 8,000 complaints but only one has resulted in a criminal conviction against the practitioner.

Ashton says: “I think there’s definitely a perception these are silly women who are having treatments out of vanity. It’s a ‘trivial thing’ and the authorities don’t think it warrants as much attention as any other form of assault.

“But the psychological impact it has on people’s lives, the number of lost jobs, relationships and friendships I’ve seen is immeasurable. People underestimate the very real consequences of a cosmetic procedure gone wrong.”

In 2020, Save Face received 2,083 complaints about botched beauty treatments.

86% of these were carried out by hairdressers, beauticians or laypeople.

81% of complainants had found their practitioner on social media – being drawn in by cheap time-limited offers, before & after pictures, and reality TV endorsements.

93% were not warned of serious complications and believed their treatments were low risk.

79% of these practitioners were believed to be uninsured.

84% of injured clients were blocked when they tried to complain.

What Is Progressive Supranuclear Palsy? – Health