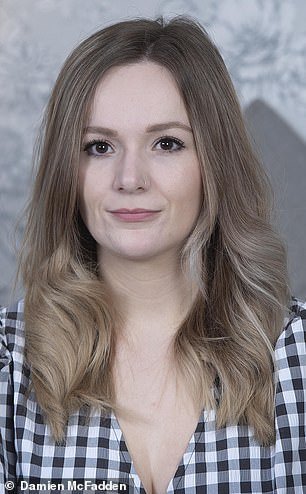 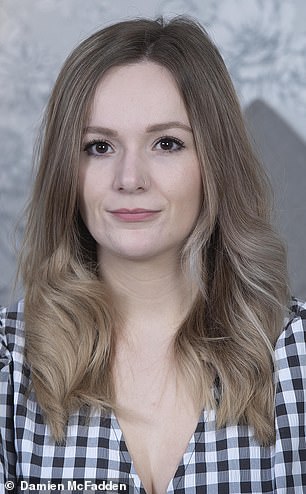 ‘I am so grateful that I got that silly little cyst removed — it saved my life,’ says Laura, 28, a chartered legal executive from Long Eaton, Derbyshire

Laura Windsor thanks her lucky stars that a moment’s vanity helped save her life. It was only after she decided to get an unsightly cyst on her arm removed that she was diagnosed with a rare blood cancer, essential thrombocythaemia, which, if left untreated, can be fatal.

‘I am so grateful that I got that silly little cyst removed — it saved my life,’ says Laura, 28, a chartered legal executive from Long Eaton, Derbyshire.

Essential thrombocythaemia (ET) is one of a group of cancers called myeloproliferative neoplasms (MPNs).

It occurs when there is a mutation in a specific gene — usually the JAK2 or CALR gene — that causes the bone marrow to uncontrollably over-produce platelets, the small cell fragments needed to form blood clots.

ET in itself is not a fatal cancer, but left untreated, patients are at risk of a stroke or heart attack due to blood clots.

Delay in treatment also raises the patient’s risk of developing life-threatening acute myelogenous leukemia (a type of white blood cell and bone marrow cancer) or myelofibrosis (a cancer of the bone marrow).

Symptoms of ET include headaches, dizziness, tiredness and itchy skin. However, half of the roughly 660 people diagnosed each year in the UK have no symptoms at all. Laura was one of them.

In October 2019, Laura came across an offer from a private clinic and decided to get a mole on her back removed.

‘It wasn’t particularly attractive and was only about half the size of a 5p piece — but it would sometimes get caught on my bra strap and become irritated,’ she says. ‘So, when I saw I could get it removed for £60, I jumped at the chance.’

Laura suggested her fiance, Christopher, 28, a primary school teacher, should get a mole on his scalp removed at the same time — so they both went to the clinic in Burton upon Trent, Staffordshire.

All went well at first. ‘The doctor injected my back with local anaesthetic and then cut the mole out,’ says Laura. ‘It was over in under 15 minutes.’

No stitches were required during the procedure and afterwards the couple watched an ice hockey game with friends. It was then that events took a rather alarming turn. 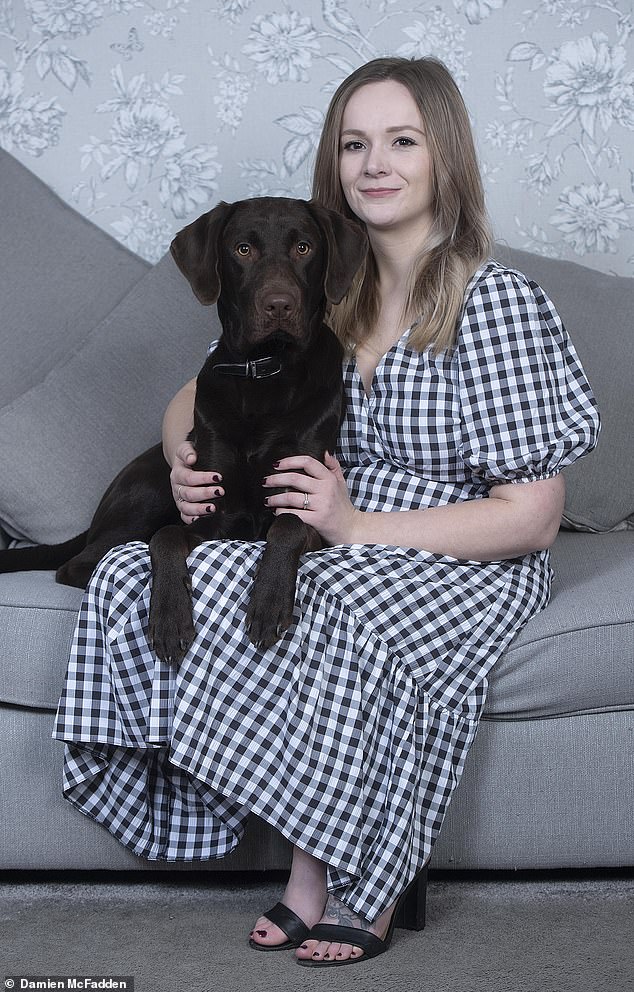 Laura is pictured above with her dog Ronnie. While the average person has between 150,000-450,000 platelets in a litre of blood, Laura had 7,428. In healthy people platelets help form blood clots to stem bleeding. But Laura had so many platelets they had gone into overdrive and were threatening to form dangerous clots that could travel to her lungs, heart or brain — which could prove fatal

Blood started gushing out of the tiny wound where my mole had been,’ recalls Laura. ‘It was dripping down my back and through my clothes.’

A St John Ambulance volunteer at the game helped to stem the blood with a bandage.

‘By the time we got home, the bandage was thick with blood,’ says Laura. ‘So when we went to bed, I lay on a bath towel. I woke up in the middle of the night in a pool of blood. By now I was really alarmed, but as it was so late, I replaced the towel and decided to go to hospital the next day if the bleeding continued.’

It did. And so, in the morning Chris drove her to A&E. By this time Laura believes she had lost a pint of blood. Nevertheless, she had to wait five hours before she was seen by a doctor.

During that time, she went through 16 gauze bandages. ‘The doctor was stunned,’ recalls Laura. ‘But he didn’t have any explanation or investigate further.He put two stitches in the wound and said that should solve the problem.’

But it didn’t. Blood continued to ooze out, although at a reduced rate. So the next day she returned to the private clinic.

Suspecting Laura’s blood was not clotting properly, the doctor who removed her mole said she might have haemophilia, a genetic disorder which affects the way blood clots. After putting in two more stitches — which stopped the bleeding — he advised her to ask her GP for a blood test.

However, the GP refused, saying it was unnecessary as there was no history of haemophilia in Laura’s family. He thought the problem was caused by a nicked artery during the mole removal.

With her wound now healing normally, Laura was happy to forget the matter. So much so that, five months later, in March 2020, she visited the private clinic again — this time to get a cyst on her upper right arm removed.

‘I’d had it for about six years but it was getting bigger and more unsightly,’ she says. Once again the operation — under local anaesthetic — went smoothly, and this time the doctor put in four stitches to pre-empt excessive bleeding.

But, by the time Laura got home, blood was already seeping through the bandage.

‘I was really scared,’ says Laura. ‘I drove straight back — about 30 minutes away. When the doctor removed the bandage, a torrent of blood squirted out.’

This time, after applying 11 stitches to stem the flow, the doctor wrote to Laura’s GP to request urgent blood tests for haemophilia, platelet disorders and liver function (which can all cause excessive bleeding).

Within 24 hours of a blood test, Laura got a call from the Royal Derby Hospital. She needed to come in immediately.

‘I started shaking with fear,’ says Laura. ‘I was whisked off by nurses to have blood taken. No one could tell me what was going on.’

It was a nail-biting two-hour wait before the consultant was able to reveal the results. While the average person has between 150,000-450,000 platelets in a litre of blood, Laura had 7,428.

In healthy people platelets help form blood clots to stem bleeding. But Laura had so many platelets they had gone into overdrive and were threatening to form dangerous clots that could travel to her lungs, heart or brain — which could prove fatal.

‘The consultant told me he had never seen such a high figure and I was very lucky I hadn’t had a stroke or heart attack,’ recalls Laura. ‘He also told me I had essential thrombocythaemia, a form of blood cancer. He reassured me it wasn’t fatal, but I would need immediate treatment.

‘He also said, just like someone with diabetes, I would need to take life-saving medication for the rest of my life.’

A spokesman for the charity Leukaemia Care explains: ‘ET is a chronic disease with no cure, but can be managed very well. Patients have an excellent chance of a normal lifespan.’

Nonetheless, the diagnosis came as a huge surprise. As Laura says: ‘I was in shock. It was so much to take in.’

With ET, the bone marrow makes too many platelets, which raises the risk of clots inside the body. In addition to this, these platelets are abnormal, which can, surprisingly, also cause excessive bleeding in some cases.

Laura spent the following week in hospital so that staff could monitor her condition and start her on a medication regimen to reduce her platelet count. She was prescribed a daily tablet called hydroxycarbamide, a form of chemotherapy that stops cancer cells making and repairing DNA which they need to do in order to grow and multiply.

However, when her platelets failed to drop, she was switched to a different drug, anagrelide. Laura took this capsule daily until last October, when she was weaned off it as her doctors were confident it had successfully stopped the bone marrow overproducing platelets.

To control her condition, she now injects herself every week with interferon alpha, a drug that reduces the number of potentially cancerous cells in the bone marrow by stimulating immune cells to attack the cancer.

‘It’s just a little needle into my stomach or leg. I do it at night as it leaves me feeling sleepy,’ says Laura. ‘I’ve been told I will need it for the rest of my life. It’s upsetting, but a small price to pay for being healthy.’

She also now has a weekly blood test to ensure that her platelet levels are within a normal range. ‘If they are around 700, everyone is happy,’ she says. I will be monitored for the rest of my life to ensure that the ET doesn’t develop into a more serious bone marrow cancer. It’s a worry but I try not to dwell on it.’

Naturally, Laura is concerned about the impact on her fertility, but doctors have reassured her that, as she is not currently on chemotherapy, she can become pregnant and carry a baby safely.

‘I still find it hard to tell people that I am living with cancer,’ she says. ‘I feel too young and look too healthy. Instead, I just say that I have a blood disorder.

‘I can’t help feeling unlucky to have cancer. But I know I’m incredibly lucky it was found and is so treatable.’

Do I really need… 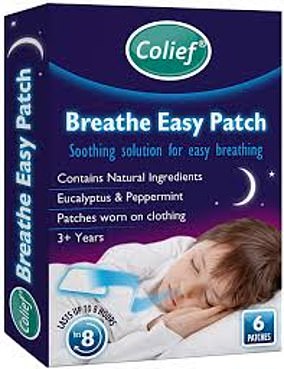 Claim: These patches, designed to be stuck onto fabric, ‘offer a soothing solution for easy breathing’.

The maker says the patch contains a ‘blend of natural ingredients’ such as eucalyptus, to help adults and children (aged over three) breathe more easily. It’s worn on night clothes or bedding near to the chest, where body heat causes the release of the vapours from the patch for up to eight hours.

Expert verdict: Ben Merriman, a pharmacist in Cumbria, says: ‘This is less messy than using a conventional vapour rub and would not need reapplying as it would not be accidentally wiped away.

‘The eucalyptus oil in here is known to have an anti-inflammatory effect, relieving the cough and congestion symptoms of cold and flu. It also contains rosemary, which has been used for many years as an effective way of reducing congestion. It is certainly something useful to have in the bathroom cabinet.’