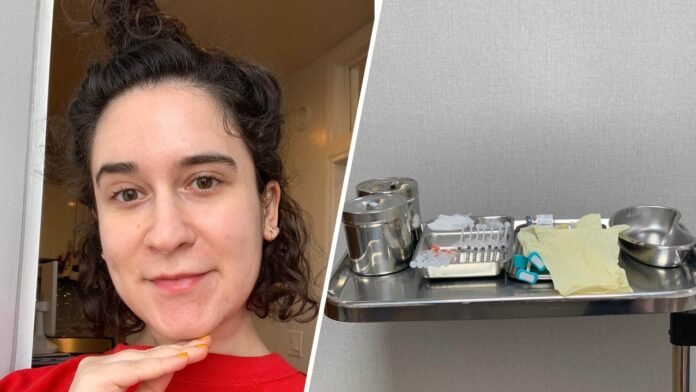 In February, a month before New York City was put on pause, my life was alive in Technicolor in Seoul, South Korea. I traveled there for 10 days to not only interview our May cover stars but also to chat with some dermatologists and try out some of the most popular injectables that one of my favorite cities has to offer.

During my first trip to Seoul in April 2019, dermatologists told me about skin booster shots, noting they were the future of dermatology. “These days it’s not about fixing a problem but preventing it,” dermatologist Lim Ee Seok at Thema Dermatologic Clinic told me. I became obsessed with the idea of being able to inject my skin with basically a superpowered serum to heal, moisturize, and brighten it, but unfortunately, skin booster shots aren’t offered in the United States. So the second I found out I was returning to Korea, the lovely ladies at Eunogo helped me book an appointment at ID Hospital with board-certified dermatologist Hwang Jong Ik to finally try them out. (They also made sure I had a translator and was treated like one of the skin clinic’s celebrity patients.)

Upon arriving at the clinic, I embarked on a multistep process before I even got to the injection room, starting with sitting down with Hwang to decide which skin booster shots were best for my complexion.

Several booster shots exist — Rejuran, Jalupro, Chanel, Hermes, and Volite are on the shortlist. Some patients pick based on what’s trendiest or dermatologists determine what’s best for their skin concerns. I went with the latter. I told Hwang I have acne and want to smooth and brighten my oily skin. From there, he selected a combo meal of sorts:

Next, I was ushered into a treatment room for a special medical facial. For the first time since getting to Seoul two days earlier, I was sitting still. I tried to commit all of the steps to memory, but by the time the first needle entered my face I had forgotten the order.

Here’s a rough rundown: A nurse started off by washing my face. Extractions happened at some point. Then, she brushed on an acid peel and let it sit for about five minutes before adding a neutralizer. (Other Korean facials I’ve gotten haven’t included these steps.) A rubber mask and several moisturizing ampoules and creams followed to nourish and degunk my dehydrated, congested, post-13-hour-flight skin.