BEAUTY is pain – especially for one woman who intended to get rid of her double chin but now looks like a “bullfrog.”

Kathleen Callahan, a soon-to-be licensed esthetician, shared just how bad the swelling got after a Kybella shot.

Looking to sport a slimmer face, Callahan got injected with Kybella, which is the brand name for deoxycholic acid. It is meant to kill fat cells in order to reduce the fat under the chin, which is known as a double chin.

And although she was expecting some swelling after the procedure, she wasn’t ready for what was to come.

In fact, she had been told that the more it swelled up the better.

“Swelling is a bit of an understatement,” she then said in a clip where she covered up with a t-shirt. “I’m like a bullfrog.” 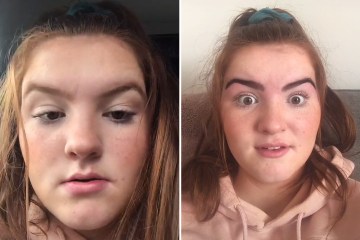 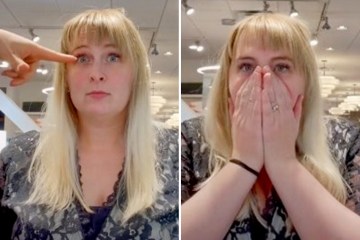 She continued poking fun at herself by also comparing herself to the Fat Bastard from the Austin Power movie series.

Despite her laughing at the situation, people quickly swooped into the comment section to share their own healing experiences.

One person shared: “I wish I could tell you it worked for me but honestly I looked like a bullfrog too and I swear my chin is worse now. I had two sets.”

A second wrote: “I did two treatments and only saw the tiniest change. I also swelled up a lot.

“They wanted me to come back for more but I’m not made out of money. Good luck.”

“I’m genuinely asking because I know I’m going to have to get it someday,” said a third.

Callahan wasn’t the only one concerned with the outcome of her procedure because another woman ended up looking like she had gills.

The 21-year-old initially decided to get botox to avoid getting wrinkles on her forehead.

But aside from wrinkles, she had also heard they’d help with her headaches.

She explained: “Now when I clench my jaw I have gills.”