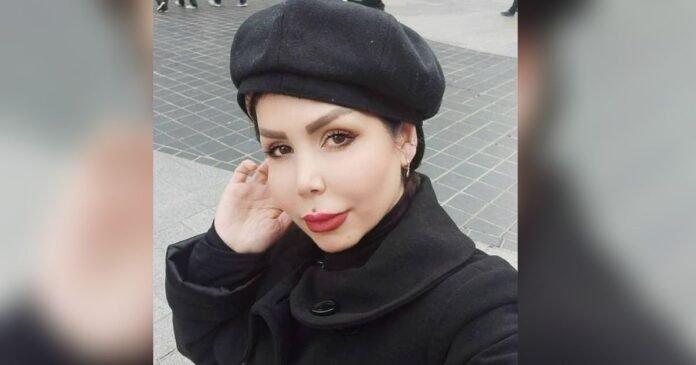 A mum was murdered by her husband after he discovered her affair with a family friend.

Malak aka Katy Adabzadeh, 47, was battered to death by Mohammad Ureza Azizi at their Stoneycroft home. Azizi used an unidentified weapon to inflict 11 head injuries, as she desperately tried to defend herself.

He trashed their apartment to make it look like it had been ransacked by an mystery attacker, before later returning with his son, and letting him find his mum “in a pool of blood” face down in the bath. Liverpool Crown Court today heard Iranian national Azizi had found out his wife was seeing married man Tooraj Khorshidi, who would visit to give her botox and lip fillers.

Questioned about the affair, Azizi told police: “Culturally in the past it was unacceptable this matter and you could be stoned to death.” Jailing Azizi for life with a minimum of 16 years, Judge Andrew Menary, QC, said he had no doubt that day, or shortly before Azizi discovered the affair, that his wife “had packed a bag and was ending the marriage”.

He said: “It may well be that she told you as much some time that morning and that it was this discovery, or this disclosure, that was the catalyst for what you then did.” Liverpool Crown Court heard Ms Adabzadeh and her then teenage son Payam Azizi travelled from Iran to the UK in 2018 and were granted asylum.

Her husband, 58, joined them 15 months later. David McLachlan, QC, prosecuting, said they lived in a two-bedroom apartment in The Green, but their relationship had “become strained” and Azizi slept in the living room and his wife in her bedroom.

Their son, 21, later told police his mum told his dad that “they may be married on paper but he was not her husband in her heart”. He never witnessed any violence between them and said “most of the yelling would come from his mother towards his father.”

The court heard Ms Adabzadeh started a sexual relationship with Mr Khorshidi, another Iranian national who lived in Norris Green, who would “give her botox and filler injections”. Mr Khorshidi initially denied the affair to police, but later admitted it.

On Thursday, November 25, Ms Adabzadeh planned to meet Mr Khorshidi at Edge Lane retail park, then spend the night together at Dream Luxury Apartments in Liverpool city centre. However, she didn’t turn up and Mr Khorshidi couldn’t contact her, so twice went to her home and called her son, who was at college.

The court heard they had exchanged WhatsApp messages, in which Mr Khorshidi referred to her as “my doll” and said “I die for you”, and she called him “dear”, until she sent a final text at 11.57am. Mr McLachlan said: “Shortly afterwards she would be battered to death by her husband.”

That afternoon Azizi walked around the Old Swan area. He was seen with a carrier bag, which prosecutors alleged contained items connected to the murder and ditched in a skip in Inigo Road in Stoneycroft, before he went into shops, without buying anything, so he was on CCTV and had an alibi.

Mr Khorshidi went to their address a third time and found their car door open. He discovered Ms Adabzadeh’s “favourite bag” in the boot. At around 4.45pm, Azizi waited to meet his son getting off a bus and they walked home together. There they met Mr Khorshidi, before they went inside.

Her son called police and all three men were initially arrested on suspicion of murder. A pathologist found Ms Adabzadeh with wounds to her head and face, caused by “repeated forceful blows with a blunt weapon”.

She had a broken bone in her left hand, thought to be a defensive injury. When interviewed, Azizi claimed two days earlier, two men had pressed the bell to their apartment, which Mr McLachlan said was an attempt to “shift blame away from himself”.

Questioned about his partner’s affair with Mr Khorshidi, he said: “We had a very good relationship together. How can he have affair with my wife? I cannot believe but culturally in the past it was unacceptable this matter and you could be stoned to death but now things has changed and it is easier for people to decide what they want to do with their life.”

Azizi disputed the evidence of neighbours who heard “banging and crying” and denied killing his wife. He said he loved her and they didn’t have any problems. Mr McLachlan said Ms Adabzadeh was getting ready to leave when “more likely than not” Azizi discovered the affair.

He said: “Upon discovery of this he brutally beat his wife to death with a weapon. After killing her he set upon an intricate plan. He made sure he left the flat in a state so that it would appear that it had been ransacked, in other words burgled, but it had not.”

Mr McLachlan added: “When they entered the flat, Mohammed Azizi made sure that he did not find his dead wife. He checked every other room bar the bathroom. It was Payam who discovered the body of his mother.”

Azizi, who had no previous convictions, admitted murder. Nick Johnson, QC, defending, said all the evidence suggested Azizi had never been violent to his wife previously and had “done his very best over the years to act as a husband should”.

He said Azizi who didn’t speak English was “culturally isolated” here, while his wife had “embraced life in the UK”, wanted to leave him, and was treating him with “open hostility and aggression”. Mr Johnson said that in no way justified his “wholly unforgivable” actions, but his son had said: “He really loved my mother. She would tell him we’re not together anymore.”

Payam said she would tell him “you’re not my husband” and he “couldn’t accept” and “couldn’t understand that”, but all the “attacks” came from his mother, trying to “destruct” him. Mr Johnson said: “All of the evidence suggests this was an impulsive and spur of the moment attack.”

He said his client was remorseful for the “dreadful” killing and leaving his son alone without any family. Judge Menary said Azizi “deliberately” tried to “cover up” the murder, then let his son find his mother.

He said: “You could have prevented that. If you had wanted to be merciful to your son, you could have avoided that.” Judge Menary said Ms Adabzadeh was a “perfectly delightful woman, who was unhappy in her marriage to you and simply wanted a different life”.

He told Azizi: “She was perfectly entitled to make that choice, whatever unhappiness may have been caused to you.” The judge said he was satisfied Azizi intended to kill her, likely in “a sudden, explosive loss of temper”.