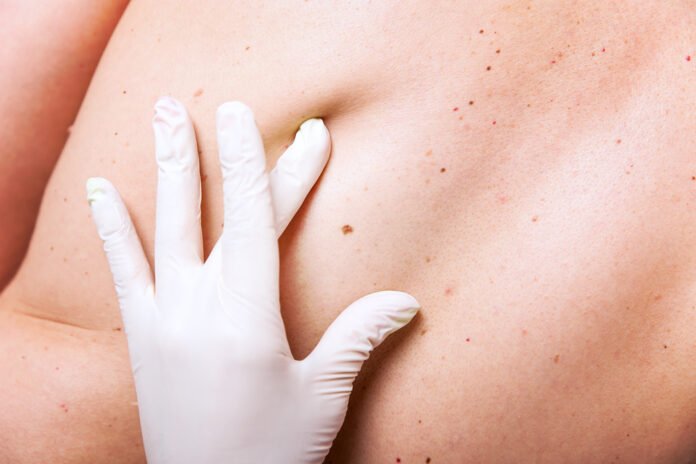 If you haven’t already heard about this incredible news story making headlines, it’s OK, it’s worth repeating. Prospective medical student Nadia Popovici was attending a Seattle Kraken hockey game in October of last year when something caught her eye. It was a mole on the opposing team’s equipment manager neck, and she knew right away it did not look right. “The mole on the back of your neck is cancer,” she wrote in large, bright letter on her cellphone and worked to get the man’s attention.

Brian “Red” Hamilton, assistant equipment manager or the Vancouver Canucks, brought the story to light when he posted a now viral Tweet about the interaction that potentially saved his life. At the time, Hamilton did not know the identity of his hero, but he knew the impact she had made. “The message you showed me on your cell phone will forever be etched into my brain and has made a true life-changing difference for me and my family,” he shared.

Because of her eagle eye, Hamilton immediately had the mole biopsied and found that it was a malignant melanoma in phase 2. This meant the cancer was on the outer layer of his skin and hadn’t penetrated deeper to the inner layer, yet. “Your instincts were right, and that mole on the back of my neck was a malignant melanoma and thanks to your persistence and the quick work of our doctors, it is now gone,” Hamilton wrote.

Thanks to Popovici’s quick thinking, Hamilton was able to have the dangerous mole treated immediately, which stopped the cancer from deepening and spreading. “Melanoma is the most aggressive skin cancer that we as dermatologists deal with on a regular basis,” says Denver, CO dermatologist Joel Cohen, MD. “Early diagnosis is absolutely key. When a melanoma is treated when it is specifically thinner and smaller, there is a much better prognosis. Delay in treatment leads to thicker lesions, and lesions that are much more likely to spread to other parts of the body.”

What to Look For

So, what did Popovici see that others may have overlooked? Southlake, TX and Monroe, LA dermatologist Janine Hopkins, MD, says to look for asymmetry in the mole as key indicator that it may be malignant melanoma. “As a dermatologist, I have a heighten sense of concern for early detection of this skin cancer which often appears as a small—less than or equal to the size of a pencil eraser—that has variations of color from tan, black, red and brown or any combination of these colors,” she explains. “The edges are often jagged, blurry or scalloped. Asymmetry is a warning sign as is changes in shape, size or color. I highly recommend full body skin exams once or twice a year because early detection is key to prevention and cure.”

Miami dermatologist Dr. Deborah Longwill says when it comes to spotting melanomas, there is an easy way to remember what to look for. “We call them the ABCDEs of melanoma,” she explains. “A is for Asymmetry, or when half of the spot is unlike the other half. B is for Border which refers to an irregular, scalloped, or poorly defined border. C is for Color which means a varying of colors from one area to the next. D is for Diameter, as melanomas are usually greater than 6 millimeters, or about the size of a pencil eraser when diagnosed, they can be smaller. And finally, E is for Evolving, or if the spot looks different from the rest or is changing in size, shape or color.”

Dr. Cohen notes this story is important as it shows how we can help one another as sometimes we’re not able to see moles on our own bodies in certain areas. “In the U.S., more than one person dies every hour from melanoma. If you see someone, as in this story, with a suspicious lesion—then say something. I have said something many times when not at work, including when on a shuttle bus while on vacation,” he adds. “Everyone should do monthly self-exams and see a board-certified dermatologist at least once a year for a skin check, or more frequently if they have a personal or family history of skin cancer or atypical moles.”

Popvici and Hamilton have now been reunited and both NHL teams, the Krakens and Canucks, have awarded her a $10,000 scholarship as a thank you for her thoughtful gesture. Just by sharing their story with the world, there’s no doubt that the news will help save more lives as people learn what to look for and the importance of saying something.