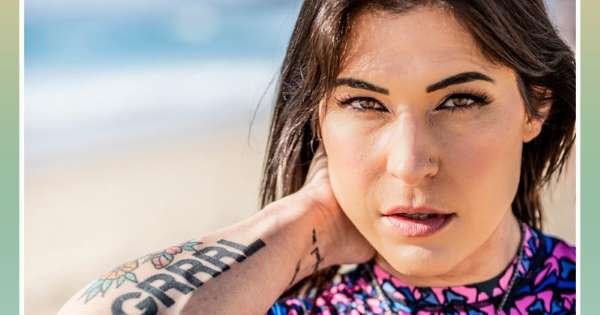 We all get mad—for any number of reasons. After all, there are many types of anger. But sometimes all-consuming anger can change your life. Just ask Kortney Olson, 39, a former arm-wrestling champion, founder of empowerment athleisure line GRRRL, and author of Crushing It: How I Smashed Diet Culture Addiction and the Patriarchy. She has packed a lifetime of experiences into her four decades.

“By the age of 21, I had experienced a rape, was diagnosed with an eating disorder and depression and was a full-blown drug addict and alcoholic,” says Olson. Her immense anger led to her lashing out and even getting arrested.

But with the help of rehab and therapy, she worked through her anger issues. And she began to heal. Now, Olson is CEO of a multimillion-dollar athleisure wear company that celebrates body positivity. Hundreds of thousands of avid Instagram followers applaud her message of strength, inclusivity, addiction recovery, and reclaiming what it means to be a woman.

Here, she shares her inspirational story. (And here’s why controlling your anger may help you live longer.)

Growing up, I was bigger than all of my classmates. Once I hit junior high, I became totally body-conscious and started counting calories. As the daughter of divorced parents and an alcoholic mom, it was the one thing I felt I could control.

A year before starting middle school, I discovered inspiration in the form of a tiny supermodel. I’d been thumbing through the pages of Vogue and found photos of Kate Moss. I thought: That’s who I want to look like.

At the time, food was the one thing I could control. Although on the outside I was very well put together—4.0 grade point average, student body president, cheerleader, hotter on the saxophone than Bill Clinton—on the inside I was suffering from severe body dysmorphia. By high school, I was dabbling with anorexia and bulimia. In my senior year, I was certain I’d found the holy grail of weight loss when I was introduced to speed after DJ-ing our Sadie Hawkins dance. (One side effect of the drug is weight loss.)

The Dangers of Drinking Too Much Alcohol

I was supposed to be the first female president of the United States. It had been my ambition since elementary school.

After spending my senior year high on meth, I was devastated that I’d pissed all of my scholarships away. At the time, I was so committed to losing weight that I didn’t care. But once the addiction started getting out of control and I was missing class and unable to speak in coherent sentences, my favorite private Catholic high school teacher called me out.

As a way to avoid getting my dad get involved, I agreed to attend a boxing class. Taught by an ex-heroin junkie and former Golden Gloves boxing champion, this guy was going to be my savior. Lacking the tools to navigate red flags, I wound up alone with this man watching videotaped boxing matches at his house.

I was supposed to be his last world-champion fighter before he retired. But instead, I was one of the last women he drugged and raped.

When I started college, I began drinking on a daily basis. Unable to let go of the image of being a world-class girl with gloves, I was slipping into anger and self-loathing. Soon I was having my first drink of the day at 10 a.m.

The drinking fueled by ego, and then rage would start to flow. Whether it was an 80-year-old woman hobbling down the street with a walker, or three grown men in a bar, I was daring anyone who looked at me the wrong way to fight. And when no one would fight me, I was kicking holes in the wall, pushing refrigerators over, smashing lamps, or knocking over people’s lawn ornaments.

In addition to being violent, I became sexual. From the produce delivery boy to my 50-year-old professor to the innocent lesbian friend with a deep crush—I slept with anyone and everyone.

Because I was cute, charismatic, and a criminal justice major, I could talk my way out of a paper bag. Being white and female probably helped, as well.

The only time I was ever arrested was after my first DUI at age 19. I had consumed three times the legal limit of alcohol. I also had three other sober roommates in the car with me. Although I was arrested, I talked the officer into releasing me to one of my sober roommates.

(Overwhelmed with anger? Try these 24 things to calm down.)

After many close arrests and deaths, threesomes and heists, kidney infections, and cases of pink eye, I realized I wasn’t where I was supposed to be. I finally went to rehab.

Going to rehab at age 21 helped with my anger. It was the first time I’d ever spoken to anyone about my rape. By talking to a therapist, I was able to recognize that it wasn’t my fault. That was the first step in helping me overcome my anger.

Rehab was also the first place I was introduced to the 12-step program of recovery. Although it still took me several attempts to get clean and sober after rehab, this intro to the steps was the catalyst that sparked a new level of awareness around my childhood trauma, which of course, was the source of my rage.

I stayed clean and sober for 90 days before the process started all over again—right along with the rage and anger. Finally, after learning I was a co-defendant with four felony charges hanging over my head, I quit drinking and using methamphetamines for good.

By this point, I had been in and out of 12-step recovery meetings and had worked the steps. Unlike my previous rock bottoms, which were physical and mental, this time it was spiritual.

Strategies to deal with anger

In my experience, the best tool for dealing with anger—in my case, a reaction to suppressed trauma—has been putting pen to paper. It was imperative to spend time working through all of my resentments that were, more often than not, the cornerstone of my anger. Without awareness of a problem, there is no problem to solve.

Most often people use substances—or shopping, gambling, sex, food—as a Band-Aid. And, for most of us, the easiest way to not look at our own stuff is to look at other people’s. That’s why it’s so easy for humans to judge other humans.

You can’t manage what you can’t see. So by doing this inner personal work, we can analyze our own character defects that we’ve often adopted as a response to being hurt, feeling afraid, powerless, or threatened. We can build our own character by reaching out to people we have harmed and ask for forgiveness, as well as forgive those who have harmed us. There is no reason to walk around with excess baggage.

Aside from doing this work of taking inventory, I always make sure I cover the basics of getting enough sleep, eating enough food, and avoiding loneliness—which has been almost impossible in this pandemic.

One of the other tools that has helped me immensely in managing anger is practicing assertiveness. Being a people pleaser, I can often find myself feeling guilty if I’ve hurt someone else’s feelings. So I would find myself saying “yes” when I wanted to say “no.”

The trick with assertiveness is that it is like a muscle—the more you use it, the easier it becomes. Just like the first time I did a bicep curl. The weight felt heavy and awkward. But after a few sessions, and repeating the movement, it started to feel like second nature.

After discovering what assertiveness is, I would practice saying no at every given opportunity. The person at the mall offering me a free sample. The cashier at the grocery store asking me if I wanted to sign up for a club card. And even the charities calling looking for donations.

At first, I felt like I was being incredibly rude. But the thought of being talked into buying some overpriced miracle lotion made from miracle coral in the Dead Sea—and me becoming resentful because I’d never use it—was enough for me to get over my perceptions.

Fortunately, I haven’t had any anger relapses. As long as I’m sober, I’m able to process my resentments on the spot. And because I’ve done a thorough inventory of my life, there is nothing left to pop back up and catch me off guard.

Anger is much like black mold. In the dark, it will fester and grow. But as soon as we shine a light on it, breaking it down and pulling it apart, we stop the growth and start to chip away at cleaning off the walls.

Next: Why anger can actually make you happier.

–As told to Nadine Jolie Courtney

Freeze away your double chin

Get a liquid nose job

Get a vampire facial—for your scalp

Lighten up, with light therapy

Be rid of brown spots

The post How I Healed—and Found Peace—After Decades of Anger and Abuse appeared first on The Healthy.