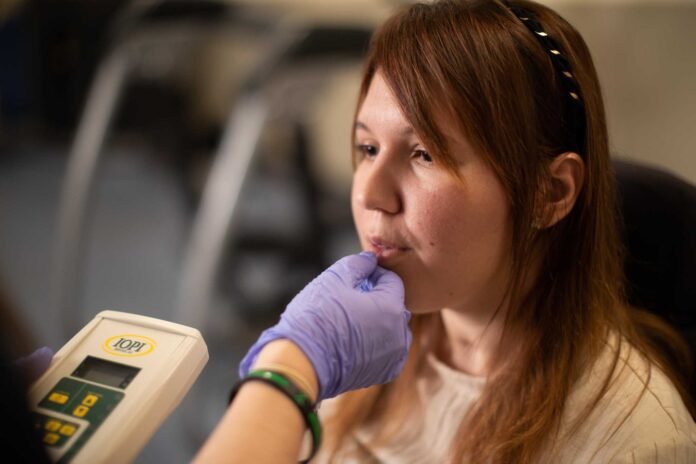 She goes to Project Walk, the paralysis recovery center, twice each week, aquatic therapy every Tuesday and electrotherapy on Thursdays. She also schedules regular massages to relieve muscle pain from being in her wheelchair.

In the summer, she returns to TIRR Memorial Hermann for continued speech and occupational therapy sessions.

Her appointments take her all around town, some 45 minutes away from her home in southeast Houston, near Pasadena.

But Mora is willing to put in the time — and do whatever it takes — to realize greater independence.

“She’s one of the hardest workers I’ve ever come across,” said Rachel Zuckman, speech language pathologist at TIRR. “She does everything to keep pushing herself forward.”

About five years ago, when Zuckman began working with Mora, blinking was the only way the two could communicate.

“She couldn’t talk at all,” Zuckman said. “Her eyes worked, but the rest of her body did not.”

Mora had locked-in syndrome, a rare neurological disorder that shuts down all of the muscles of the body except the eye. The condition usually results from injury to the brain stem.

“It’s very rare for a patient to come out of locked-in syndrome,” Zuckman said.

In fact, it’s almost unheard of — and some patients with locked-in syndrome do not live past the early phases, due to medical complications, according to the Cleveland Clinic.

Mora is defying the odds. She no longer fits within the confines of the diagnosis — and continues to make progress.

Because her speech is affected, an interview was conducted through email and Messenger.

She was living in her apartment with her two daughters, Lizbeth and Sofia, then 8 years old and 5 months old — and took a tumble down the stairs holding her baby.

“I did everything that was in my hands to protect her,” Mora said.

Her sister Jesica Jimenez was celebrating her birthday with friends that evening. In the early hours of the next morning, her mother Linda Montemayor-de Mora called crying, saying Sandra was at Memorial Hermann in the Texas Medical Center.

“I went straight to the hospital,” Jimenez said.

Once there, Montemayor-de Mora was waiting with her father, Eleno Mora, and brother Cristian Mora. “When we first got there, no one knew what had happened,” Jimenez said. “Everyone was confused.”

It wasn’t until a couple of days later that doctors could paint a picture. Mora’s fall left her with a brain stem hemorrhage and a thrombosis stroke.

The diagnosis was a shock. “She was only 25,” Jimenez said. “And there’s no history of stroke in our family.”

’ALIVE INSIDE’: How a Houston hospital restores patients with severe brain injuries

Doctors told the family that Mora would never be able to walk or talk, that her mind would never function as it once had.

Mora spent two months in the intensive care unit, then four more in the hospital. Montemayor-de Mora stayed constantly by her side.

“My mom was desperate,” Jimenez recalled. “Just seeing my mom in that state, she was broken almost, I wanted to help. I wanted to give her hope.”

Then Jimenez remembered a movie “The Diving Bell and the Butterfly,” which chronicles journalist Jean-Dominique Bauby’s stroke and subsequent life with locked-in syndrome. The film is based on a book that Bauby wrote by blinking his eye to indicate certain letters.

“Close your eyes,” Jimenez instructed her sister. “And when I say the right letter, open them.”

It worked. Slowly, Mora could spell out her thoughts.

“We realized she was all there,” Jimenez said. “And she remembered everything. Every detail. All of her memories were there.”

Mora described how she felt before others realized her mental function was intact.

“I was trapped in my own body,” she said. “I tried to move but couldn’t. Everything felt heavy. I couldn’t help but cry.”

She recalls people talking all around her, not knowing she understood. She lay there with her eyes open. “You just want to move or say something and can’t. You start crying and nobody notices,” Mora said.

She was scared that family, friends and doctors would give up on her.

Blinking was her first step to changing all of that.

Dr. Sheng Li started working with Mora in 2020. A professor at UTHealth’s McGovern Medical School, he also is director of Stroke Rehabilitation and Recovery Research.

His research focuses on sensory and motor recovery after neurological impairments, including after stroke.

“When we look at a stroke, we assume it’s someone in their 60s and 70s,” Li said. “Sandra is unusual. This is very rare in terms of age. The reason the stroke happened to her, it’s a mystery. There’s no definitive cause found in her case.”

He said that, while rare, vertebral artery dissection is the most common cause of a stroke for individuals younger than 45.

The diagnosis results from a tear of the inner lining of the vertebral artery, which is located in the neck and supplies blood to the brain. After the rupture, a blood clot forms, thickening the artery wall and often impeding blood flow.

“Her stroke is a rare condition,” Li said.

In fact, it is estimated that they account for only 10 percent of strokes. Left untreated, a brain stem stroke can be life-threatening, Li said. “It was a severe stroke. It affected both sides but was more severe on the right side.”

After her time in acute care, Mora was deemed medically stable enough to begin her rehabilitation journey. Her mother and sister researched the best options — and landed on TIRR.

She arrived at TIRR in November 2016, and Zuckman became her speech pathologist right away.

“She had become medically stable at that point,” Zuckman said. “With patients like this, you see what they can do, instead of what they can’t, and you build off of that.”

Renew Houston: Get the latest wellness news delivered to your inbox

A communications device, developed by Tobii Dynavox, was key to moving forward. Mora was able to make small movements with her hand. By positioning the device on a chair, she could start using it.

The next focus was on getting Mora to swallow. Zuckman used strong flavors to trigger the reflex.

Strokes can affect the cranial nerves that trigger the ability. “If you’re not swallowing, you’re not protecting your airway,” Zuckman said.

Swallowing can prevent infections from forming in the lungs. Also, the same physical structures involved with swallowing are paramount to speech.

“Sandra started to make attempts to speak, but her speech was really unintelligible,” Zuckman said. “We’ve been able to improve the strength of her tongue, the function.”

Botox injections helped relax the tightened muscles in her tongue, jaw and shoulder. Zuckman provided drills to practice at home.

“She would come back and have mastered it,” Zuckman said.

Mora continues to build on her abilities. Zuckman and her family can understand her speech currently, but Mora wants to improve further.

Li agrees. “With her motivation and determination, our staff and the facility at TIRR, there’s great hope that she can advance further,” the doctor said. “For the severity of a stroke like hers, it is a miracle for her to come back to where she is now. She’s had a great recovery to this point. … I’m optimistic that she will be able to recover further.”

Mora’s daughters are her greatest inspiration.

“She really strives to be there for them, to be the best possible mom she can,” Zuckman said. “She’s very much trying to ensure her daughters do not miss out on anything because she had a stroke.”

That’s why, last Christmas, Mora took Lizbeth, now 13, and Sofia who recently turned 6, and her parents to Disney World. She planned the whole trip.

“I only got a travel agent to combine the park tickets, Disney hotel and plane,” Mora wrote. “Everything else was me.”

It started when Mora wanted to stand for photos at her friend’s wedding in September 2021. She combined training with TIRR and Project Walk to achieve her goal.

“You see her standing in the photos, and she looks beautiful,” Zuckman said. “She sets goals for herself, and she makes it a point to get herself there.”

After realizing she was able to reach her goal at her friend’s wedding, Mora set a new one — taking her family to Disney. She’d taken Lizbeth there before her accident and wanted to return.

Mora dedicated herself to therapy to prepare — and researched how accessible the theme park was. She found that even restaurants at Disney could prepare meals that fit her swallowing limitations: 50 percent by mouth and 50 percent by tube.

The family all headed to Orlando last Christmas — and spent three days in the park.

“I didn’t have to struggle at all there like I have in other places because of my disability,” Mora said. “I was very happy.”

Now, she has new goals. Mora turns 31 in July. Both of her daughters want to join taekwondo — and she wants to be there to support them.

She hopes to regain her independence — to take care of her parents and her daughters.

Cristian said his sister is constantly improving. “I don’t think she’ll ever quit,” he said. “She wants to be there for her daughters, as they get older, and do whatever she can for them. She has a lot of motivation to get better for her girls.”

Whenever someone says “this is the best Mora can do,” her sister just surpasses their expectations, Jimenez said.

Peyton is a freelance writer based in Houston.