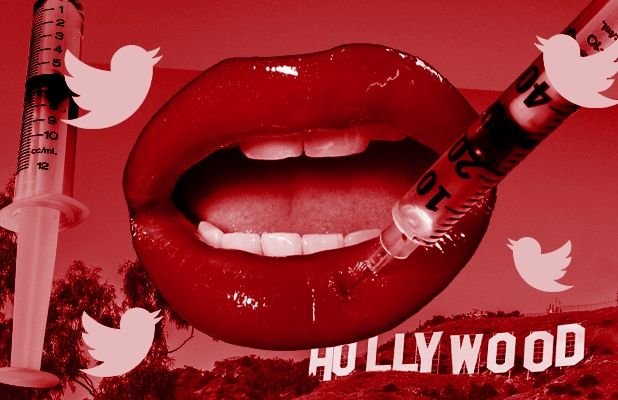 Reports of swelling or redness at the site of cosmetic filler injections concurrent with the COVID-19 vaccine have Twitter users taking shots at Los Angeles, long considered the plastic surgery capital of the world.

In some cases, the tweets needle Hollywood — that is, the entertainment community, not the geographic one — about its perceived preoccupation with plumping lips and smoothing wrinkles for movie and TV shoots, social media, Zoom appearances and the currently virtual Red Carpet.

Even a shelter-at-home year can’t erase the reality that time is still TikTok-ing on for the celebrity crowd. Moreover, plastic surgeons report a boom in plastic surgery during the pandemic, largely because patients want to take advantage of unobserved recovery time while working remotely.

And it doesn’t help matters that the vaccine is becoming more widely available during Hollywood’s ongoing, though pandemic-delayed, awards season. “Moderna’s vaccine causes swelling in peoples faces who have Derma fillers so we’ll be needing a new vaccine in Los Angeles,” wrote one snarky Tweeter.

Nurse: *ready to give Covid vaccine* Have you had any Botox or filler in the past 6 months?

Me: You do know this is Los Angeles, right? *tries to raise eyebrow*

So now they’re warning if you’ve had facial fillers you could have an adverse reaction to the vaccine. Which means that half of Hollywood will not be able to roll up their sleeves. #botox #vaccine

LA has generally been a hellhole this year but today I learned that the moderna vaccine makes face filler swell up and, well, I am very excited for springtime in Los Angeles

This isn’t the first time greater Los Angeles has taken hits during the pandemic for its widely perceived obsession with youth and beauty.

In late April, the city of Beverly Hills rescinded a pandemic moratorium on elective surgery, allowing for colonoscopies, heart valve replacements, angioplasties and other potentially life-saving procedures to begin again. However, a New York Times story led with the fact that the ruling would also allow cosmetic procedures to resume. Of the 281 members of the American Society of Plastic Surgeons practicing in Los Angeles County, about 100 are located in Beverly Hills.

“No one needs Botox during a pandemic,” The New York Times quoted the one dissenting member of the Beverly Hills City Council saying, worried that the city’s high concentration of plastic surgeons combined with a reputation for extreme narcissism would cause the public to assume the ruling was intended to reinstate “boob and butt jobs” in the face of an unprecedented global health crisis.

Apparently for the same reason, local plastic surgeons were hesitant to go on the record with TheWrap about whether social media chatter about COVID-19 vaccines vs. fillers is causing a significant panic among patients.

A spokeswoman from one L.A. plastic surgery office said that she had heard no reports of adverse reactions to the COVID-19 vaccine but that the office recommends patients avoid having filler injections near the same time as the COVID vaccine, just in case. (Botox is not a filler, it’s a neurotoxin, so Botox injections are not implicated in the filler controversy).

Also Read: Why Amanda Peet Is Terrified of Botox and Alicia Vikander

According to an Allure magazine article on the issue, recorded reactions to fillers are both minor and rare, and surgeons quoted in the story caution that the benefits of any approved brand of the COVID-19 vaccine far outweigh any risks of cosmetic filler problems.

Lest anyone be mislead by Twitter on the subject of COVID-19 vaccines when it comes to cosmetic injections — or any other rumored side effects — Twitter recently introduced a strike system to help curb COVID-19 misinformation on the platform. Tweeters who repeatedly post misinformation about the virus or the vaccine may have their accounts suspended.

However, according to Twitter’s guidelines, “Strong commentary, opinions, and/or satire,” are allowed, provided these do not contain “false or misleading assertions of fact.” The satire exclusion suggests that when it comes to COVID-19 vaccines and facial filler injections, Twitter just might continue to stick it to L.A.