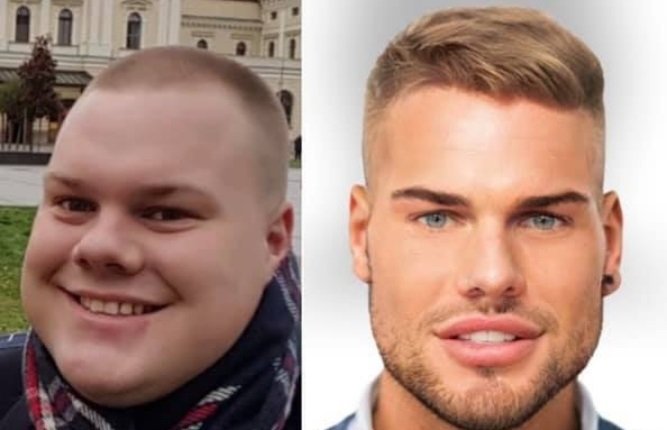 Dale Saint Cullen is warning people about getting cosmetic surgery as a result of social media influence. (PHOTO: Facebook/Dale Cullen)

It started with a nose job then suddenly his chin wasn’t good enough, his cheeks needed a bit of work, his lips were too thin and his jaw needed to look sharper.

Now 28-year-old Dale Saint Cullen is warning others of the dangers of being tempted into having plastic surgery because of social media pressure.

He had a nose job, a chin implant and crowns placed in an attempt to achieve perfection, only to find out it doesn’t exist.

“On social media, I never noticed at the time, but I was looking at these people who looked perfect and I fell into this vicious cycle of chasing what was not the reality, it was completely fake,” says Dale.

“I was flying out to Poland and Turkey and showing surgeons filtered pictures on Instagram of how I wanted to look,” he adds.

He says it took him a while to realise that what glitters isn’t always gold and that the pictures were often filtered.

Coming to terms with the fact that he’ll never find what he’s chasing, Dale is urging people to love themselves from within. He travelled to several countries in order to achieve the perfect look but it was never enough. (PHOTO: Facebook/Dale Cullen)

“I’m 28 now and it seems as if people on social media are getting younger and younger and I worry about the effect it has on them,” says Dale, who now looks completely different from the man he was before his surgeries.

“When you see all these reality TV stars and influencers and they look perfect it can be really damaging to young people. And when people are encouraging followers to get surgery or telling people to buy these products or get the perfect Hollywood smile, it’s just crazy,” he adds.

“I think I was trying to fit in with society. I was fine during school. It wasn’t until social media came about that I first started thinking about getting work done.”

After the initial nose job, it was one thing after another.

“It’s like there’s always a new trend and I just couldn’t keep up. I’m all for following the trend but not when it means you have to change your entire face,” he says. Dale is going back for more surgery soon, although he says his motivation is coming from the right place now. (PHOTO: Facebook/Dale Cullen)

And while he doesn’t regret his new look, Dale says he regrets the reason behind his need to go under the knife.

In fact, he’s due for another cosmetic procedure in June but insists his motivation is now coming from the right place.

He advises people to do their research and make sure their intentions are not falsely influenced. He warns that cosmetic surgery can make a person feel worse than they did before.

“I’m seeing a therapist to try to make sure I work on myself. The work I had done in the past wasn’t for me. I did it under the pressures of social media,” says Dale.

“I’m in a much better place now and I make sure everything I do is for me.”