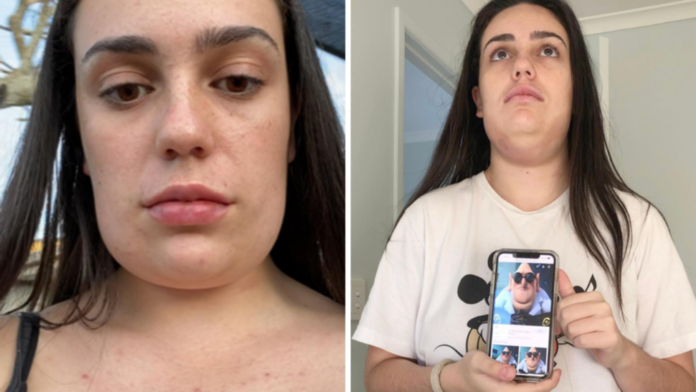 A Gold Coast woman who was left with a “square head” after a beauty treatment has revealed her staggering new look.

Sofia Marroquin underwent the Kybella procedure in a bid to reduce the fat around her chin and jaw.

Kybella is a deoxycholic acid – the same acid your body produces to help it absorb fat.

It takes only a few minutes for a licensed dermatologist to inject it under the jawline right into your fat tissue.

The drug immediately goes to work, destroying the cell membrane of what doctors call “submental fat,” causing it to burst and go away permanently.

But shocking photos show how Sofia suffered such severe swelling that her head looked mishapen.

When she uploaded a video of her family’s reaction to her swollen face to social media, people were quick to respond, asking her why she’d do such a thing to herself.

“There was a moment in time when it felt like the world was against me,” Sodia admits.

“Now that more people know that I purposefully didn’t want to become a square, I’m getting more love over hate.”

Sofia’s face has since recovered and now she’s embraced her new look.

“It took one week for the major swelling to subside and from there, my face slowly went back to normal,” she says.”

“At three weeks I could already see a difference. It took eight weeks for the full results.

“The treatment destroyed my stubborn fat, I used to be 20kg heavier, and made my face look slimmer.

“Mentally, I feel more confident and relieved. I was so self-conscious about it and now I feel at peace because I don’t have to think about that problem.”