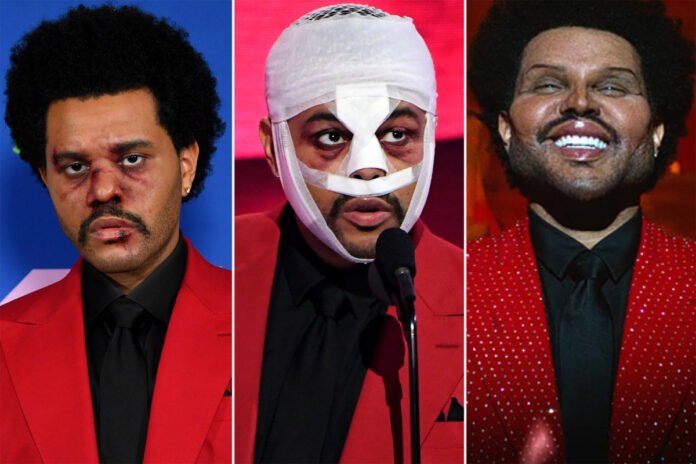 The Weeknd is finally facing the music after shocking the public with his ever-evolving face.

Fans have questioned the singer’s look for well over a year, as he’s been seen sporting variations of a bloody-and-bruised visage for his album “After Hours,” long before his much-hyped Super Bowl 2021 halftime performance.

But the singer, whose real name is Abel Tesfaye, teased from the get-go that he was creating a persona for his fourth studio album.

“There’s also a very committed vision and character being portrayed, and I get to explore a different side of me that my fans have never seen,” he revealed in an interview for CR Fashion Book in March 2020. Having just turned 30 — his birthday is February 16 — he had said the album in its entirety served as an “introduction to the next chapter of my life.”

However, in the hours leading up to his big game day performance — The Weeknd really broke it down: “The significance of the entire head bandages is reflecting on the absurd culture of Hollywood celebrity and people manipulating themselves for superficial reasons to please and be validated,” he explained to Variety. “It’s all a progression and we watch The Character’s storyline hit heightened levels of danger and absurdity as his tale goes on.”

The facial saga began in the “Heartless” video, released in December 2019, as his red suit-wearing character has a wild night out in Las Vegas. But things take a dark turn in “Blinding Lights,” his second single, which picks up where “Heartless” left off. It’s also the first time he debuted the defaced face that had fans concerned.

But those who thought The Weeknd’s terrifying performance art would be a one-off statement turned out to be dead wrong.

Here’s a timeline of the halftime headliner’s about-face while we we wait to see what look — bloody horror or surgically plumped perfection? — he sports at Super Bowl 2021.

The “Blinding Lights” video, which debuted in January, marked the first of many shock-and-awe occasions for the singer.

Wearing what would become his new signature uniform — a red suit over a black button-down shirt — his face appears bloody after a fall and an altercation staged in the video. He replicated the look for a performance on “Jimmy Kimmel Live!” later in January.

At the time, fans were clueless about this macabre persona. But the singer later explained the dark meaning of the track to Esquire in August: “ ’Blinding Lights’ [is about] how you want to see someone at night, and you’re intoxicated, and you’re driving to this person and you’re just blinded by streetlights. But nothing could stop you from trying to go see that person, because you’re so lonely. I don’t want to ever promote drunk driving, but that’s what the dark undertone is.”

Eventually, The Weeknd explained that this was a recurring character for all the videos for “After Hours,” including the short film.

“This character is having a really bad night — all these videos are taking place in one night — and you can come with own [sic] interpretation of what it is,” he told Variety.

“[In the ‘After Hours’ short film,] we have this guy go through a complete breakdown, which looks like a possession — I’m being dragged by an invisible force through the subway. Is he possessed, or is he just broken?”

While The Weeknd debuted his new song “Scared To Live” on “Saturday Night Live,” it was the first time fans caught his new “look” — a bloody face with a bandage over his nose — in the flesh. But the head-scratching appearance, also seen while he sang “Blinding Lights,” was exclusively for his musical performances, and he opted to ditch the gore while acting in sketches.

However, he did wear the getup during rehearsals for “SNL.” “I forget that I have it on sometimes,” he said of his makeup.

He followed up his “SNL” concert with a video for “In Your Eyes” (featuring Kenny G), which contained a warning at the beginning noting graphic material.

The Weeknd continued to inhabit the bloodstained character as he kept up his disturbing persona in yet another music video, wearing the same red suit, and his cuts now sporting gruesome bruises — all obtained through crafty makeup.

During a performance atop Hudson Yards, he carried on with the bloody aesthetic in the pre-taped VMAs segment. He also sported the gory mug while heading to rehearsals in New York, freaking out fans on the sidewalk while he signed autographs.

By the time the AMAs came around, The Weeknd went full-on mummy, adapting his guise with bandages and bruises over blood, while accepting several awards and during his performance.

The next week, he kicked off a set of events with Vevo, including live performances of “Faith,” “In Your Eyes” and “Alone Again” — all of which saw a return of the blood.

New year, new face? Turns out the blood was just the start for The Weeknd, who opted for a “plastic surgery” face for his “Save Your Tears” video. “But then you saw me, caught you by surprise,” he sang, shocking fans with what appeared to be a thinner nose, cheek implants, plumped lips and surgery scars.

While the look was achieved through prosthetics or CGI, he has previously worked with makeup effects studio Prosthetic Renaissance, which posted about the transformation on social media.

Fans speculated that the plumped up face was a dig at his ex, 24-year-old Bella Hadid, while others assumed it was a metaphor for being snubbed at the Grammy Awards, for which he received no nominations this year.

But shortly after the video made the rounds on social media, confusing fans in the process, The Weeknd reminded us of his regular face in a Super Bowl ad.

For The Weeknd, it’s all about “The Character.”

While promoting the Super Bowl in commercials, the singer has been showing off his real face and seemingly ditched the busted one fans couldn’t stop talking about.

He even advised his fans “that being attractive isn’t important to me but a compelling narrative is,” in his revealing Variety interview — and also explained why he’s been going back and forth between himself and “The Character,” as he called it.

“Why not play with the character and the artist and let those lines blur and move around?”