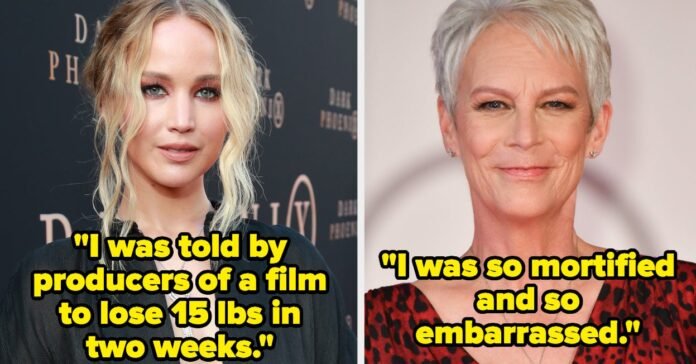 “The director told me that in certain lights, I looked like a monster.”

In a recent Instagram post, Amanda Bynes wrote, “I once did a movie where the director told me that in certain lights, I looked like a monster.”

Lili Reinhart shared on her Instagram story earlier this month, “A director once came up to me before a take and said, ‘Suck in your stomach a little bit.’ Unfortunately, it’s something I think about often when I’m filming a scene.”

Jamie Lee Curtis had a Vicodin addiction after being prescribed the drug following plastic surgery. In 2019, she explained how a cameraman’s comment influenced her decision to go under the knife, saying, “We were shooting a scene in a courtroom with that kind of high, nasty fluorescent light, and it came around to my coverage in the scene, and [the cameraman] said, ‘I’m not shooting her today. Her eyes are too puffy.'”

Melanie Lynskey said earlier this year that a member of production body-shamed her on the Yellowjackets set: “They were asking me, ‘What do you plan to do? I’m sure the producers will get you a trainer. They’d love to help you with this.’”

Last year, Jessie Cave recalled how a costume director once grabbed her stomach, “Which was just horrible. And I laughed. You’re like [she puts on a placating voice]: ‘Oh, you’re hurting me. Actually, it’s fine.’” As a result, Jessie will now go into fittings feeling “terrified”: “I’m prepared to be told something unkind.”

Jennifer Lawrence said in 2017 that earlier in her career, she was asked to lose 15 pounds in two weeks by a producer. “During this time, a female producer had me do a nude line-up with about five women who were much, much thinner than me. We all stood side-by-side with only tape on covering our privates,” she explained.

Amy Schumer was asked to lose weight for her own movie, Trainwreck. “The only change was that it was explained to me before I did that movie [was] that if you weigh over 140 pounds as a woman in Hollywood, if you’re on the screen it will hurt people’s eyes,” she said back in 2016.

Sophie Turner previously opened up about the pressures of being on screen from a young age, saying in 2017, “There are times when I have done jobs and they’ve told me that I have to lose weight, even when it has nothing to do with the character — it is so fucked up.”

Margaret Cho was told by ABC in the ’90s that she was “too overweight” to play herself. “I ended up hospitalized with kidney failure from not eating,” she recalled back in 2015.

Chloë Grace Moretz said she was body-shamed by a male costar when she was just 15 and he was mid-20s. “This guy that was my love interest was like, ‘I’d never date you in real life,’ and I was like, ‘What?’ And he was like, ‘Yeah, you’re too big for me,'” she explained in 2017. “It was one of the only actors that ever made me cry on set.”

Emma Thompson said that she almost quit the 2008 movie Brideshead Revisited after her female costar was asked to lose weight. “It is evil what is going on out there, and it is getting worse,” she said in 2017.

Debra Messing said a few years ago that, on the set of the movie A Walk in the Clouds in 1995, director Alfonso Arau told her, “How quickly can we get a plastic surgeon in here? Her nose is ruining my movie.” She further alleged that the director made her do an unplanned nude scene.

Kate Beckinsale said last year of her experience on Pearl Harbor, “There were diet plans and exercise regimens that [were] really punishing. [They] really baffled me because I couldn’t understand why a ’40s nurse needed to work out that much. It was just a whole different situation.”

Finally, Minnie Driver revealed in 2017 that she was told by Harvey Weinstein that she was “just not fuckable” when he produced Good Will Hunting. She ended up being Oscar-nominated for her role, despite Weinstein saying she wasn’t “hot enough” for the part.

Get all the best moments in pop culture & entertainment delivered to your inbox.