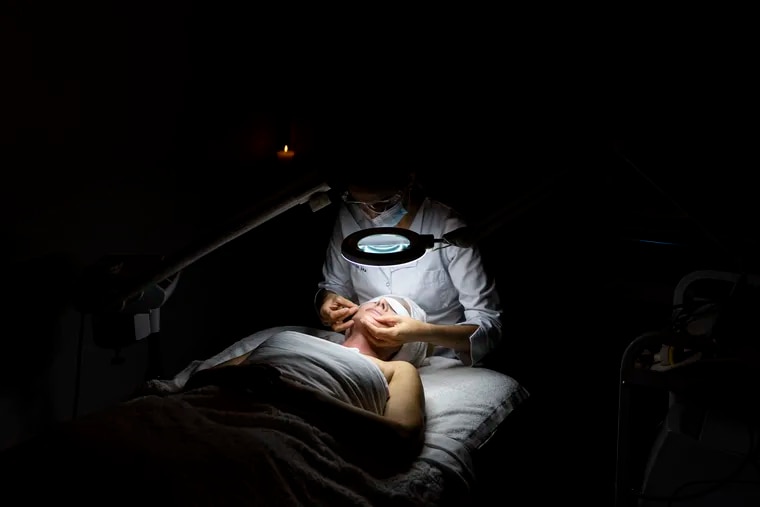 When Aleksandra Ambrozy was in her early 30s, she noticed wrinkles creeping around her eyes and on her forehead. She began a skin care regimen that included retinol products and Botox to reduce the appearance of fine lines and wrinkles.

“There’s a fine line between looking good and looking fake,” said Ambrozy, now 41, a makeup artist who lives in Fishtown and uses small, subtle treatments. “I notice the difference but I don’t think other people can and it makes me feel better.”

Botox is a prescription neurotoxin that is injected to temporarily reduce the underlying muscle activity that causes frown lines, crow’s-feet, and forehead lines. Ambrozy has Botox treatments about every three months, at $400 to $500 per treatment.

“Previous generations didn’t have those options,” said Ambrozy. “There is a lot of pressure for women to stay youthful-looking as long as possible. Celebrities in their 50s and 60s have a completely tight face and no wrinkles. We look at that and it affects us.”

In most cases, the flawless faces of celebrities and social media influencers are photographed through a filter or they’ve had plastic surgery, said Nazanin Saedi, director of the Jefferson Laser Surgery and Cosmetic Dermatology Center in Center City.

Saedi has seen about a 25% increase in younger patients interested in antiaging procedures over the last five years. Previously, people in their late 30s or early 40s started to dabble in Botox, she said. Now it’s late 20s or early 30s.

In 21- to 35-year-olds, neurotoxins were used in just over 400,000 procedures last year, a jump from previous years, said Herluf Lund, a St. Louis-based plastic surgeon and current president of The Aesthetic Society.

Lund attributes the rise to several factors, most recently, the widespread use of video conferencing such as Zoom, which has people staring at their own faces for hours every day.

» READ MORE: ‘I felt like trash’: How the pandemic and Zoom have affected body image in young people

“Study results show earlier use of neurotoxins can act as a preventative measure to slow or delay some of the first signs of aging, including frown lines and forehead wrinkles,” Lund said. “There has also been a shift in marketing by the manufacturers of neurotoxins to target a younger and more appearance-centered audience, particularly in the 21- to 35-year-old range.”

As a group, millennials tend to be more interested in personal care at a younger age than earlier generations were, experts say. For many, it’s part of a wellness routine that includes nutrition, exercise, and mindfulness practices. For some, using Botox and other treatments is just another way to look as young as possible for as long as possible. There are also more nonsurgical cosmetic options than ever before, making treatments accessible and affordable.

But for women who are already struggling with self-esteem, pressure to look young can increase anxiety, said Jeremy Tyler, assistant professor of clinical psychiatry with the Center of Treatment and Study of Anxiety at Penn Medicine.

“I’m often explaining to folks about how perfectionistic behaviors reinforce and continue that cycle of anxiety,” he said. “If you were prone to feeling bad about yourself, you’re going to feel worse because with social media, perfection is being thrown in your face constantly.”

This drive to look younger, Tyler said, “seems to be driven by the feeling that you need to meet some standard that might not be achievable in reality. The reality is you are going to age and look different as you age. So, without addressing that self-esteem concern, the behavior is going to become more extreme.”

Saedi said that as long as her patients have realistic expectations, starting an appropriate skin care regimen — including injectables and laser treatments — at a young age is a good idea.

“That might include small amounts of filler in areas that have lost volume or light Botox to soften the lines or a laser treatment to soften the complexion,” she said. “But all to make them look natural, not overdone.”

Starting early won’t have any harmful effects in the long term, she said, and will help prevent or delay more invasive procedures like plastic surgery later on. She recommends starting with topical treatments including retinoids (the prescription form of retinol, part of the Vitamin A family) and sunscreen that reduce or prevent the signs of aging — fine lines, wrinkles, sun damage — and increases cell turnover.

For Mackenzie Grillo, 27, who had acne as a teen, that plan makes sense.

“I started diving deep in my skin care routine in my early 20s for antiaging, wanting to take a preventive approach,” said Grillo, who lives in Somers Point, N.J.

That includes the daily use of retinols, chemical exfoliants to shed dead skin cells, hyaluronic acid to keep tissues lubricated, and sunscreen. She spends about $300 a year on skin care products.

Recently noticing an increase in the fine lines on her forehead, she is considering Botox. “I’m looking to slow the appearance of my wrinkles before they really start,” she said. “I’m not looking for any dramatic change.”

For Grillo, starting the antiaging process early will help prevent anxiety, she said, not add to it. “I feel comfortable with my physical care, diet and exercise at my age, knowing that I’m taking care of my body, my skin included,” she said.

During the pandemic, Rescue Spa in Rittenhouse added a skin rejuvenating laser treatment to address the overall appearance of skin and correct issues with pigmentation, capillaries, acne, and skin tone. Many of Rescue Spa founder Danuta Mieloch’s millennial clients get the 45-minute to one-hour treatment, starting at $450, monthly.

“The key is using common sense, staying balanced and not taking things to the extreme,” said Mieloch, who believes in starting preventative care early and encourages her clients to be realistic in their expectations.

Ambrozy agrees. “You need to accept that you’re getting older and you’re going to start getting lines even if you do those things,” she said. “But you can make it slower. If it makes you happy and brings you joy, then why not.”