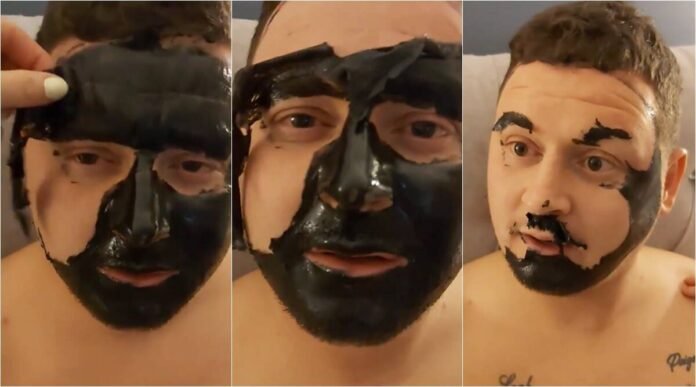 A Scottish man’s beauty treatment ended on a rather painful note. John Meechan applied a black charcoal mask all over his face — even his eyebrows, upper lips and beard. Unfortunately, he didn’t realise how sticky it would be.

He had asked partner Tracy Dougall to apply some of her blackhead peel-off face mask but after she refused, the dad-of-two decided to do it for himself, Daily Mirror reported. When time came to take it off, he realised what he had done — much to the amusement of his daughters and partner.

Dougall shared the hilarious video on Facebook, and quickly it garnered a lot of attention online, leaving people in splits. “So John rocks in the room all proud of himself he’s put a mask on scared the shite out of me but then realise he’s slapped it all over his eyebrows lips and beard,” she wrote.

In the footage going viral, he can be heard crying in pain, and swearing out loud as she tries to pull out the mask. His daughter Page can be heard saying: “It’s actually waxing them I swear to God.”

“I better have eyebrows,” he responds winching in pain, while others have a hard time controlling their laughter. “This is torture,” he adds as they both try to peal it off screaming every time.

Explaining how it happened, the 30-year-old man said after Dougall had refused, he thought he’ll do it himself. “She said everywhere except your eyes, so I put it everywhere except my eyes. How was I to know you weren’t meant to put it on your eyebrows and lips?” he told Daily Record.

He managed to get it off completely, not without peeling but washing the rest of with very hot water and nearly scalding himself. “There’s a few hairs still left but not many. If this is what women have to go through to be beautiful, then I’ll stick with being ugly,” he told the daily.

I Got Botox Shots In My Face! Watch the Video!